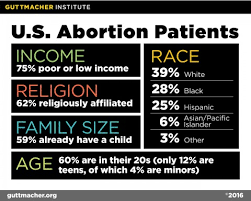 About one-quarter of people in poverty in the United States are Black. Joia Crear-Perry, president of the National Birth Equity Collaborative in Washington DC, warns that banning abortion would disproportionately harm the physical, mental and economic well-being of Black people with the capacity for pregnancy.

In particular, Crear-Perry is concerned that abortion bans will raise the already dire rates of maternal mortality for Black women in the United States, which currently stand at 44 deaths per 100,000 births, four times the global average for high-income countries.

The amicus brief that she co-signed with other health-equity researchers and advocates states: “Black women, in particular, who continue to experience the effects of racially-motivated policies and practices that impact their maternal health, must have the right to decide whether to continue a pregnancy to term.”

Mississippi’s assertion that abortion access has nothing to do with women’s ability to pursue careers, higher education and financial stability is supported by an amicus brief signed by anti-abortion organisations and a group that describes itself as 240 women scholars and professionals, who have degrees in law, medicine and other subjects.

“Women do not need abortions to achieve,” says Michele Sterlace-Accorsi, the executive director of the organisation Feminists Choosing Life of New York, and a signatory on the brief. It criticises the Turnaway Study and others that link the right to abortion to women’s health and empowerment, saying that researchers have mistaken correlation for causation.

More than 150 economists disagree with this criticism in an amicus brief of their own. They write that statistical methods developed over the past 30 years allow researchers to isolate and measure the effects of abortion policies.

“The field of causal inference focuses precisely on figuring out when correlation does equal causation,” their brief argues.

Some of the studies described in the economists’ brief find that abortion legalisation in the 1970s helped to increase women’s educational attainment, participation in the labour force and earnings, especially for single Black women.

That remains true, the brief says. For example, one study posted last year assessed about 560 women of comparable age and financial standing periodically after they either got an abortion or were unable to get an abortion they sought.

Meanwhile, the overdue debt of women who had received an abortion remained stable, and their financial events had declined modestly. Will Covid force public health to confront America’s epic inequality?

“Mississippi is arguing that there is no evidence that abortion access matters to people’s lives, and that is just wrong,” says Caitlin Myers, an applied macroeconomist at Middlebury College in Vermont, and a signatory on the brief.

Finally, the economists supply evidence to counter Fitch’s argument that abortion is no longer necessary because support is available from the state. The United States is alone among wealthy nations in not mandating paid maternity leave, the brief points out.

It also provides figures indicating that a single parent earning the minimum wage would need to spend more than two-thirds of their income on childcare, with care for the average infant costing about $10,400 per year.

These figures matter, the researchers argue, because two main reasons that women give for seeking abortions are concerns about money and caring for existing children. About 75 per cent of women who choose to have abortions are in a low-income bracket, and 59 per cent already have children, according to the economists’ brief.

The Supreme Court will decide the case by the end of June 2022. Even if the justices don’t overturn Roe, they could effectively end the precedent by erasing its viability standard, which permits abortion up until a foetus can survive outside of the womb.

If the court shifts this standard on the basis of arguments about when a foetus becomes a person, the research filed to the justices might not matter. Because this question is not something that science clearly defines, Toti says, courts generally haven’t debated it. But that could change.

If Roe’s viability standard ceases to exist, states will be able to block abortion at early stages of pregnancy, as Texas did last month with a law that bans abortions after six weeks of pregnancy, before most people know they are pregnant. On October 21, Texas joined Mississippi in asking the Supreme Court to reverse Roe.

With this in mind, some researchers are forecasting what the future might look like in the United States if Roe is overturned or significantly curtailed by the Supreme Court. In one unpublished analysis, Myers modelled what will happen if abortions are banned in 12 states with pre-emptive ‘trigger bans’, which will automatically block abortion if Roe is overturned, and in 10 other states with several types of abortion restrictions in place.

She estimates that, on average, a woman in these states who seeks an abortion will need to travel 280 miles (450 kilometres) to reach a clinic, and each year the distance will present an insurmountable obstacle for around 100,000 of them, who don’t have the means to travel far.

Laurie Sobel, a researcher at KFF, a non-partisan health-policy research organization based in San Francisco, California, is working on a similar assessment. KFF refrains from taking political positions, but Sobel says the evidence for the potential repercussions of this court decision is clear.

“This could have a devastating impact on women that would be real and very severe in many states.”