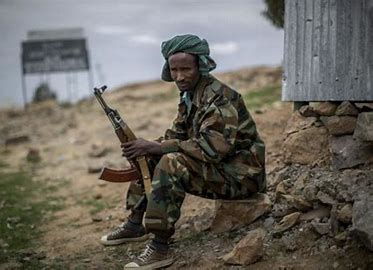 Ethiopia government has summoned all capable citizens to war, urging them to join the country’s military to stop resurgent forces from the embattled Tigray region “once and for all.”

The call to arms is an ominous sign that all of Ethiopia’s 110 million people are being drawn into a conflict that Prime Minister Abiy Ahmed, a Nobel Peace Prize winner, once declared would be over within weeks. The deadly fighting has now spread beyond Tigray into neighbouring regions, and fracturing in Africa’s second most populous country could destabilise the entire Horn of Africa region.

Tuesday’s announcement effectively ends the unilateral cease-fire the government declared in June as its military retreated from Tigray. It is also almost certain to magnify the toll of a nine-month war that has led to the massacre of thousands, widespread gang rapes and the displacement of entire communities, mostly Tigrayan. Hundreds of thousands of people in Tigray now face famine conditions in the world’s worst hunger crisis in a decade.

The prime minister’s summons chilled Tigrayans, even those outside Tigray, with the statement calling on all Ethiopians to be “the eyes and ears of the country in order to track down and expose spies and agents” of the Tigray forces. Witnesses and lawyers have said thousands of Tigrayans already have been detained during the conflict for their identity alone.

“The kind of war he’s calling for is on another level, it’s for a total annihilation of Tigray,” said Teklehaymanot G. Weldemichel, whose family remains trapped in the Tigray region. “‘Once and for all’ means to finish everyone out.”

The expansion of fighting has alarmed some people of other ethnicities, such as the Amhara, who fear that the Tigray forces, now on the offensive, will take revenge.

“We know the (Tigray People’s Liberation Front) is well-armed and the losers would again be the Amhara people,” Demissie Alemayehu, a US-based professor who was born in the Amhara region, said shortly after the prime minister’s call to war. Without addressing Ethiopia’s root problems, including a constitution based on ethnic differences, he said, it will be “very difficult to talk about peace.”

The deputy head of the Amhara regional government, Fenta Mandefro, asserted that hundreds of Amhara residents have already been killed. “More people will be endangered if we continue adhering to a ceasefire ignored by the TPLF,” he said.

The call to join the military is so far not compulsory, but with access to parts of Ethiopia increasingly blocked, it’s difficult to know what kind of pressure is being applied. Spokespeople for Abiy’s office, the military and the Tigray emergency task force did not respond to questions.

Ethiopia’s sharply worded statement came after weeks of mobilisation by the federal government, including military recruiting and blood donation drives, as Tigray forces pushed into the neighbouring Amhara and Afar regions.

On Tuesday, the spokesman for the Tigray forces, Getachew Reda, told The Associated Press that the prime minister “wants to send militia to the war front as cannon fodder” and called it unfortunate that “ill-trained, ill-equipped people” are now being pressed into the fight.

The war began as a political dispute. Tigray leaders dominated Ethiopia’s repressive government for nearly three decades, embittering many across the country by helping to put in place a system of ethnic federalism that led to ethnic tensions. When Abiy came to office in 2018, the Tigray leaders were sidelined.

Fighting began in November and took a stunning turn in June when the Tigray forces, strengthened by new recruits among Tigrayans horrified by the war’s atrocities, retook much of the region.

The Tigray forces now say they want to secure their long-blockaded region of six million people, end the fighting and see the prime minister leave office. Despite the resentment of many in Ethiopia, they are hoping for public support as they vow to press to the capital, Addis Ababa, if needed.

“If his government topples, that’s icing on the cake,” spokesman for the Tigray forces told the AP last week.

Like Ethiopia’s government, they could use deprivation as means of pressure. Getachew confirmed that the Tigray forces’ aim in the Afar region is to control a crucial supply line to the rest of Ethiopia from neighbouring Djibouti, on a major shipping lane. He called it “part of the game,” saying people in Tigray are starving.

“It’s not to spite the other parts of Ethiopia,” he said.

Some 300,000 people have now been displaced outside Tigray, and this week the UN said it was “extremely alarmed” by reports that more than 200 people had been killed in attacks on displaced people in Afar. Ethiopia’s government blamed the Tigray forces, whose spokesman denied it.

The new statement from the prime minister’s office takes aim at some in the international community, blaming them for the “machinations of foreign hands” in the war, and alleging without evidence that some had been caught “red-handed supporting the (Tigray forces) under the disguise of humanitarian aid.”

The government has suspended the operations of Doctors Without Borders and the Norwegian Refugee Committee, accusing them of “disseminating misinformation.”

The rhetoric in the government’s new statement “could well presage renewed restrictions on the humanitarian relief efforts in Tigray, reversing the already modest progress made in recent weeks,” Aly Verjee, a senior adviser at the United States Institute of Peace, told the AP.

The statement also “leaves little room for dialogue, and as we have seen, a war of words does little to end the war on the ground,” he said. “When the federal government calls Tigrayan forces terrorists and traitors, it is not likely to encourage restraint on the part of the Tigrayans, who are already militarily ascendant.”

The prime minister last month referred to the Tigray forces as “weeds” and “cancer,” bringing a swift warning from the US about dehumanising rhetoric. Since then, Ethiopia’s government has repeatedly said it is targeting the Tigray forces alone and the TPLF, which it declared a terrorist group earlier this year. “The battle is not with Tigray but with the terrorist forces,” its new statement said.