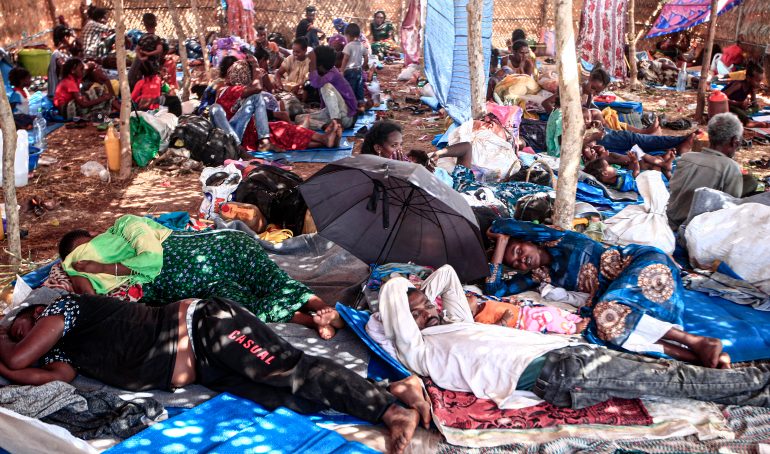 The suspension of two major international relief organisations in Ethiopia could further worsen the humanitarian situation in Tigray, where an aid blockade is still effectively in place, even as conflict spreads into neighbouring regions and hundreds of thousands of people face famine.

The blockade, and a cash crunch caused by limited banking services in Tigray, have left aid groups struggling to function, and led to increased concerns about the welfare of the roughly 500 aid workers – both national and international – based in the region.

The risks are highest for Tigrayan staff who cannot easily leave the country and would be particularly vulnerable should federal forces retake the region humanitarian officials say. Some have been displaced during the conflict and have lost family members and friends.

The Norwegian Refugee Council (NRC) and the Dutch section of Médecins Sans Frontières (MSF) confirmed last week that they had been barred from operating across the country for three months, with the government accusing them of “disseminating misinformation”.

Several aid officials working on the Tigray say they were unsure how to interpret the timing of the suspensions but believe the organisations have been singled out either for their humanitarian work or for running advocacy campaigns the government didn’t like.

MSF was one of the main organisations delivering health services in Tigray, while NRC, which supported nearly 600,000 Ethiopians – was among the most outspoken agencies working on the crisis. A third group – the Dubai-based Al Maktoum Foundation – was also suspended, for “budget mismanagement”.

The government said it had held “repeated discussions” with the aid agencies prior to suspending them, but issues weren’t fixed.

The suspensions, which come as the UN pushes back against government accusations that aid organisations are smuggling weapons to rebel groups in Tigray, is likely to further silence those wanting to speak out about what the UN referred to in June as the world’s worst hunger crisis in a decade.

“The message [from the government] is that if you want to continue your programme in the country – let alone Tigray – then you will be silent,” said a senior aid official who is not based in Ethiopia but is working closely with colleagues on the ground.

The official, and three others who spoke to The New Humanitarian, all asked not to be named for fear of reprisals from the government against their organisations and staff members in Ethiopia.

Tigray’s nine-month conflict has expanded in recent weeks as rebels push deeper into neighbouring Afar and Amhara regions, uprooting some 250,000 people, according to the UN. Lalibela, a Unesco world heritage site in Amhara, which has a longstanding land dispute with Tigray, is among the latest cities to fall.

Prime Minister Abiy Ahmed has called on paramilitary forces from across Ethiopia’s ethnically-based regions to respond to the offensive, and has threatened to deploy its “entire defensive capacity”. Eritrean forces allied to Addis Ababa are also involved in the conflict.

Aid workers said that agencies will be stretched thin as they try to meet the growing humanitarian caseload in new regions: Most are already struggling to assist the more than five million people in need of urgent assistance within Tigray.

The UN’s World Food Programme (WFP), says about 100 trucks a day are needed to supply food, fuel, and other items to those in need of lifesaving support. Just a handful of convoys totalling a few hundred trucks have arrived in the region since late June.

Aid officials accuse Addis Ababa of delaying the provision of aid through various procedural hurdles, while attacks on humanitarian workers and convoys have further complicated operations. Twelve aid workers have been killed since the conflict began.

Addis Ababa says it is making efforts to remove bottlenecks facing agencies but that checks on vehicles are necessary for security reasons. The government says it has spent more than $2 billion on aid and repair work in Tigray during the conflict.

The Tigray conflict followed months of tension between the government and the region’s ruling party, the Tigray People’s Liberation Front. The TPLF dominated Ethiopian politics for almost three decades but lost power when Abiy took office in 2018 amid anti-government protests.

Addis Ababa announced a unilateral ceasefire on 28 June – after sustaining heavy battlefield losses – but the authorities have since blocked aid convoys from going into the region, while cutting off electricity, telecommunications, banking, and trade.

In response, the Tigray Defence Forces (TDF) – a military entity formed at the start of the conflict by civilians and existing Tigrayan military personnel – launched an offensive to break the blockade and pressure the government to accept its ceasefire conditions, which now include demands for a transitional administration that would force Abiy out.

The eastern push into Afar aims to sever a crucial trade route that links neighbouring Djibouti to Addis Ababa, and accounts for around 95 per cent of Ethiopia’s imports. The Amhara offensive seeks to cut supply roads there ahead of a possible offensive on western Tigray, which was annexed by Amhara during the conflict.

The NGO suspension, meanwhile, comes amid high-level visits from the UN’s new emergency relief coordinator, Martin Griffiths and Usaid chief Samantha Power, who has called for the government to “unblock aid”.

The Ethiopian government justified the ban by claiming both organisations had spread misinformation on different platforms, and had failed to ensure foreign staff were working with appropriate permits.

But the senior aid official said banning the Dutch section of MSF – the Spanish section had already halted its work in parts of Tigray after the June murder of three staff members – was designed to remove “the backbone of health in Tigray”.

It also punished a vocal advocacy group that had documented “deliberate and widespread” attacks on healthcare facilities; called for an investigation into the June murders; and described violence against civilians in the region as “utterly shocking”.

Though NRC has a smaller footprint in Tigray, it has also been outspoken on the crisis, making regular media appearances that have attracted the government’s attention and ire, said a well-placed second senior aid official.

This source said the Ethiopian government is wary of the organisation’s secretary-general, Jan Egeland – a former UN relief chief perceived as having considerable influence among some of the Western diplomats leading calls for humanitarian access in Tigray.

The suspensions, the official added, could also be viewed as a “deflection” tactic aimed at forcing agencies to focus advocacy efforts on their reinstatement rather than on addressing the blockade and the humanitarian crisis.

US universities lose billions in revenue, strain financially as foreign students stay away