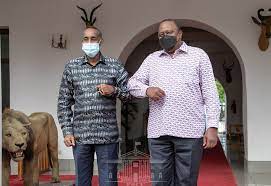 Kenya and Somalia have agreed to fix their relations that have been strained since December, after Somalia accused Kenya of violating its sovereignty and interfering with its internal affairs.

The diplomatic ties restoration agreement was sealed on Tuesday following talks between Kenya’s President Uhuru Kenyatta and Mohammed Hussein, the visiting prime minister of Somalia, at the coastal city of Mombasa.

Kenyatta who led the Kenyan delegation at the bilateral talks said for the two countries to prosper, there is need to collaborate further on security, trade and investment by fully implementing the 2015 Joint Commission for Cooperation.

The Joint Commission for Cooperation defines the scope of the two countries collaboration in areas such as trade and investment, transport, defense and security.

“The prosperity of our people is key. Let us open a new page for our people by encouraging people-to-people interactions,” Kenyatta said.

Kenyatta underscored the importance of stability in national and regional development, saying economic growth is only possible in a peaceful environment.

“Without peace, there cannot be prosperity. Let us focus on providing services to our people. This can only be possible if we work together to root out terrorism,” he said. “It’s time to improve trade and sort out immigration issues to allow increased people-to-people interactions.”

Hussein said he regretted the recent deterioration in relations between the two neighbouring countries, saying it was an error for the nations to forsake the vision of unity held by their founding fathers.

Hussein acknowledged the historical relationship that exists between Kenya and Somalia, saying the friendship is based on “good neighbourliness, cooperation, stability and mutual respect”.

“Today is the beginning of a strong and deep relationship of our brotherhood. Somalia will work hard to strengthen the Joint Commission for Cooperation in the interest of both people, their unity and stability, and beyond the region and the continent,” Hussein said.

He assured delegates that his country will look for opportunities that lead to lasting stability and peaceful coexistence based on mutual respect and genuine cooperation while avoiding anything that could harm that relationship.

Prior to the Kenyan visit by the Somalia prime minister, Raychelle Omamo, Kenya’s cabinet secretary for foreign affairs, paid an official visit to Mohamed Abdirizak, her Somalian counterpart in Mogadishu.

The two expressed mutual commitment to regional stability, principles of democracy, and fostering human and economic contact across borders.

Omamo reaffirmed Kenya’s commitment to deepen relations with Somalia and to work together to promote peace and security within the region.

President Mohamed Farmajo of Somalia welcomed Omamo’s visit and the outcome of the consultations between the two ministers.

Farmajo affirmed his own commitment and that of his government to the pursuit of peace, stability and good neighbourliness.

In a joint communique, Omamo and Abdirizak agreed to expeditiously organise the third session of Somalia-Kenya Joint Commission for Cooperation through which the two countries will undertake comprehensive discussions and develop clear modalities for implementing commitments in the areas of mutual interest.

The two officials also welcomed the return of their respective ambassadors to their diplomatic stations in Mogadishu and Nairobi, affirming the move as a pointer to the commitment to open a new chapter in bilateral relations.

Central to the diplomatic row between Kenya and Somalia has been an unresolved maritime border dispute that started in 2014. The 160,000 square-kilometre triangular contested border area has prospective oil and gas deposits. The two countries disagree over the direction their maritime border extends into the Indian Ocean.

While Somalia argues that its southern boundary should run southeast as an extension of the country’s land border, Kenya claims that Somalia’s border should take a roughly 45-degree turn at the shoreline and run in a latitudinal line.

Following the dispute, Somalia sued Kenya at the International Court of Justice in August 2014 for unlawful operations in its maritime territory. The case is yet to be resolved.

Somalia’s Jubbaland state has further deteriorated the relationship between the two countries. Somalia’s central government does not recognize the state, which happens to be a key security partner for Kenya in the fight against the al-Shabaab militia group.