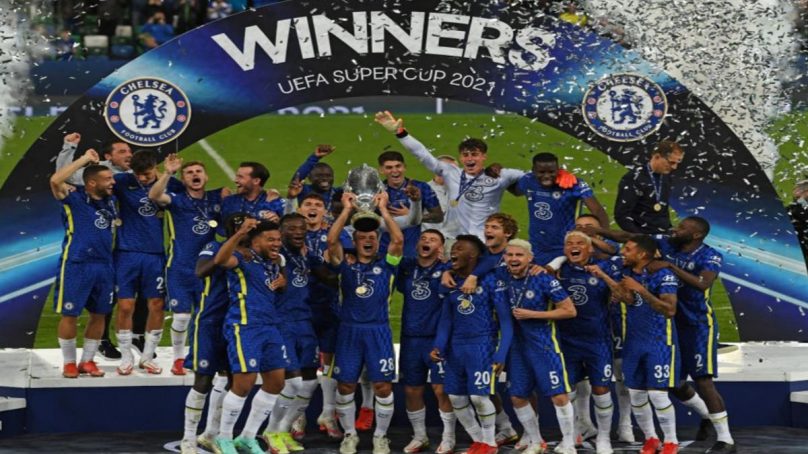 Romelu Lukaku will seemingly have no problem walking straight into the Chelsea team after watching his prospective new employers struggle past Villarreal on penalties to clinch the Super Cup. Chelsea clinched the Super Cup after a 6-5 penalty shootout win

The Belgium striker landed at Biggin Hill airport just outside London on Wednesday afternoon before his £97.5 million ($135 million) move from Inter Milan and watched as the Blues toiled for 120 minutes in front of goal.

After a difficult debut season at Stamford Bridge in the previous campaign, Hakim Ziyech opened the scoring for the Champions League holders after great play between Marcos Alonso and Kai Havertz down the left-hand side.

Havertz, whose sole goal in the elite European competition was the winner in the final against Manchester City in May, cut the ball back and Timo Werner’s dummy left Ziyech with the simple task of tapping in.

Yet the 28-year-old was left requiring oxygen after injuring his shoulder and he looked in considerable pain as he walked off.

Former Liverpool defender Alberto Moreno nearly drew the Europa League winners level before the break, but his stunning effort pinged off the bar and it remained Chelsea’s game.

Yet Thomas Tuchel will have been disappointed to watch his side sink deeper and deeper as they ceded possession, only to then concede to the Spanish side.

Antonio Rudiger failed to properly clear his lines and the ball fell to the dangerous Gerard Moreno outside of the box. After a clever one-two, the Spain striker was afforded the freedom of the Chelsea box and dinked past Edouard Mendy.

As the game headed into extra time, both Christian Pulisic and Marcos Alonso fluffed chances before the final whistle, yet it was the USA international who had the best chance to regain the lead.

He appeared to have down the hard work after getting the ball back from Havertz and nudging the ball out of his feet, yet he toe poked his effort wide.

Despite needing a goal, striker Tammy Abraham was not called up from the bench amid uncertainty about his future and with Roma and Arsenal reportedly circling.

Whilst Abraham watched on from the bench, Kepa Arrizabalaga managed to get onto the pitch for the shootout in place of Mendy.

The Spain international made sure it was the right call by Tuchel as he made the decisive save from Raul Albiol to secure the Super Cup in Northern Ireland for the Premier League side.