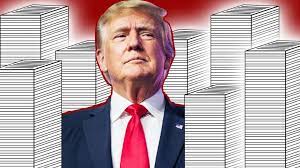 The Democratic lawmakers investigating Trump will be able to see his personal financial records from 2017 and 2018, US District Court Judge Amit Mehta of Washington ruled on Wednesday.

House Democrats will also have access to documents relating to Trump’s lease of a building near the White House, according to the Washington Post.

Following the verdict, CNN reports that the ruling is a resounding loss for Trump, given that the accounting records appear to cover financial information that the former President has fiercely protected. It described is as a major step toward resolving the long-running fight over access to Trump’s tax records.

Trump has been able to delay the subpoena by taking the case to court, appealing all the way to the Supreme Court. That legal fight has lasted more than two years.

Democrats had claimed they needed Trump’s financial records from 2011 to 2018 in order to pen legislation fixing “glaring weaknesses in current ethics legislation” that came out during the 45th president’s tenure.

The case is a continuation of the House tax returns case that travelled up to the Supreme Court. Now, Mehta has weighed the House request for Trump’s financial records against the standards laid out by the Supreme Court in its July 2 ruling last year.

With that Supreme Court opinion in mind, Mehta upheld the parts of the House subpoena that were targeted at the lawmakers’ stated need for considering legislation around Foreign Emoluments Clause issues and the General Services Administration’s lease with the Trump hotel at the Old Post Office building in Washington. The committee can also access some financial documents from 2017 and 2018, Mehta decided.

Mehta ruled that the subpoena of Mazars in some ways should be treated like any subpoena it issues, especially as the committee investigates Trump’s Washington, DC, hotel lease with the federal government.

“The Committee has presented ‘detailed and substantial’ evidence that President Trump, at least through his business interests, likely received foreign payments during the term of his presidency,” Mehta wrote regarding the Emoluments Clause, which bars the acceptance of gifts from foreign nations. without congressional approval. The judge noted the Trump Organization gave to the Treasury Department more than $400,000 in payments during Trump’s presidency, “validating the Committee’s belief that President Trump’s business received some foreign payments during his presidency.”

Mehta, an appointee of Trump’s predecessor Barack Obama, narrowed the House subpoena for Trump’s financial records. Mehta ruled that the congressional inquiry was too intrusive but could proceed in a more limited fashion.

The House Oversight Committee first issued the subpoena for the Trump financial records held by Mazars in April 2019. The following month, Trump filed a lawsuit in federal court seeking to block Mazars’ compliance with the subpoena. Mehta initially held the subpoena, as did the US Court of Appeals for the DC Circuit, prompting Trump’s appeal to the Supreme Court. Chief Justice John Roberts’ majority opinion backed Congress’ authority generally to issue subpoenas for a president’s personal financial records, but he instructed lower courts to weigh those subpoenas against “special concerns regarding the separation of powers.”

In considering the records that the House committee was seeking for its investigation into the Trump hotel’s GSA contract, Mehta found that the separation of powers principles “have little, if any, force.”

“By freely contracting with GSA for his own private economic gain, and by not diving upon taking office, President Trump opened himself up to potential scrutiny from the very Committee whose jurisdiction includes the ‘management of government operations and activities, including federal procurement,’” the judge wrote. “That he happened to occupy the presidency for some portion of his still-in-effect lease does nothing to change that fact.”

The federal judge ordered Trump’s accounting firm Mazars USA to provide two years” worth of records, while dismissing the House Oversight and Reform Committee’s effort to obtain a broader scope of Trump’s documents.

“Such limited legislative need cannot justify the degree to which the Maloney Subpoena imposes on the separation of powers, even in the case of a former President,” Mehta wrote.

“The more Congress can invade the personal sphere of a former President, the greater the leverage Congress would have on a sitting President.”

A Trump aide told Politico that the ex-president will fight to keep his tax records under wraps by appealing Mehta’s decision.

“While it is disappointing that the Court, despite finding that the entire subpoena served valid legislative purposes, narrowed the subpoena in some respects, the Committee is actively considering next steps,” Maloney stated, according to The Hill.