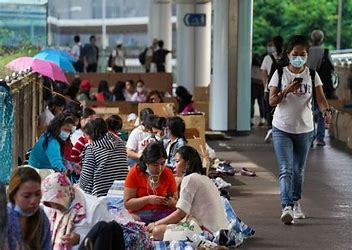 Dynamic zero Covid: How vaccine complacency has become an unintended side effect of their success

For the handful of places around the world that effectively stopped Covid-19 transmission, vaccine complacency has become an unintended side-effect of their success. Although some regions have managed to blunt transmission of the highly infectious Omicron variant of SARS-CoV-2, others are experiencing considerable outbreaks in populations with low vaccination rates.

Nowhere is this more apparent than in Hong Kong. Its ‘dynamic zero Covid-19’ policy is being put to the test as daily confirmed cases of Covid-19 climbed to 56,000 in the past one week and deaths reached 246 on March 1.

“With the low vaccination rate, we have currently, I’m really concerned,” says Benjamin Cowling, an epidemiologist at the University of Hong Kong. “Omicron, we know it’s a little bit milder, but actually in people that are not vaccinated, it’s not that mild.”

People with severe disease will spend weeks in hospitals, which are already overwhelmed.

The situation was very different a year ago, when weekly confirmed Covid-19 cases averaged 17 a day and didn’t go above 60 a day for the rest of the year. In February 2021, Hong Kong started offering vaccines to the public. But uptake has been slow: by January 1 this year, only 62 per cent of its population was fully vaccinated and as of February 7 only 33 per cent of people over 80 years old had received one dose.

A study in June 2021 by academics at Hong Kong Baptist University found that more than half of 2,753 people surveyed were hesitant about or resistant to getting the vaccine.

“One important reason for vaccine hesitancy is the absence of perceived benefit from vaccination when there is no risk at all,” says Chunhuei Chi, director of the Center for Global Health at Oregon State University in Corvallis. Studies show that people are less likely to get vaccinated against SARS-CoV-2 if they feel they are at low risk of catching Covid-19. Researchers have found a similar effect during past infectious-disease outbreaks, including the H1N1 influenza outbreak in 2009–10.

A study of people in Taiwan who were hesitant to get a vaccine found several reasons for this, including the feeling among older participants that they were not at high risk of catching the virus because they didn’t go out and encounter others as much as young people.

Some thought that younger people should be vaccinated first, according to the results, which were published in January by researchers at National Taiwan University.

“My conjecture is that the perception of risk of being infected by Covid-19 can trump many other factors, especially in Hong Kong and Taiwan,” says Chi.

Some public-health researchers are optimistic that Taiwan will not see as many Covid-19 cases as Hong Kong. Around two local cases of Covid-19 are confirmed daily, but these numbers are expected to rise when entry restrictions for non-resident business travellers are relaxed this month. Chiou Shu-Ti, an epidemiologist and founding president of the Health and Sustainable Development Foundation in Taipei, thinks local governments and the public will be able to stamp out any Omicron outbreaks quickly.

But others are sceptical. “It’s so difficult to stop Omicron,” says Cowling. A single super-spreader event can get out of control quickly, he says.

When complacency is a factor, governments need to drive vaccine demand with strategies that address people’s concerns and barriers to vaccination, says Katie Attwell, a social scientist at the University of Western Australia in Perth, Australia, who studies vaccine hesitancy.

One of those is Tonga, which kept the virus at bay until this year. The country started rolling out vaccines in April 2021, but there was some degree of complacency at the time, says Mark Jacobs, who is the World Health Organization Representative to the South Pacific and is based in Fiji.

To counter this, the Tongan Ministry of Health, supported by the World Health Organization and the United Nations children’s charity UNICEF, visited every village – including those on remote outer islands – to speak to people about vaccines and answer questions.

Jacobs says the country’s first case of Covid-19, detected in quarantine in October 2021, motivated more people to get vaccinated, as did the first cases of community transmission this February.

“I think it’s clear that the virus being present in a community does a certain amount of PR for the vaccine,” says Attwell. As of February 19, 90 per cent of the Tongan population over 12 years old is fully vaccinated and 100 per cent of people over 80 have received at least one dose, according to Jacobs.

But even with high rates of vaccination, Covid-19 cases there have increased, with more than 700 reported since January 3. The nation is also recovering from a gigantic volcanic eruption on January 15 that released large amounts of ash and gave rise to a tsunami, which caused widespread devastation at the same time as the country is trying to control the outbreak.