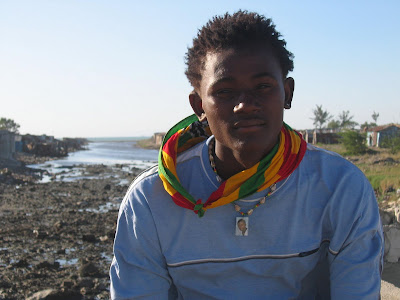 Dying in Haiti: A gangland where UN and International aid agencies hire armed criminal escorts to ferry food to the needy

United Nations relief organisations occasionally in Haiti employ armed escorts to cross gang-blocked roads, such as in Martissant. But getting commercial security companies to help train aid groups in hostile environments and driver safety in Haiti has been a challenge.

Many firms have refused to work here, or charge exorbitant rates if they agree.

Christina Wille, director of Insecurity Insight, which provides security analysis and recommendations to humanitarian workers, said three main factors determine how groups address the security issue in Haiti: disposable funds, their degree of involvement with local organisations and communities, and whether their focus is more on their own organisation or helping partner groups.

“These are quite different security approaches,” Wille explained. “It depends on what you have to report to donors, or a board or founders. It’s a very different mindset if you are a very well-resourced agency which operates in a big international structure”, and that doesn’t have to rely on “low-cost, home-made security solutions” for the protection of local staff, as smaller groups often have to.

With many organisations no longer having expat staff in the country – and even for many of those that do – there’s an increasing focus on supporting local staff through additional training. This can include everything from general kidnapping preparedness to teaching key tips such as varying routes to work, ensuring you’re not alone for money withdrawals, and regularly communicating your whereabouts.

Aid groups “need to have clear ethical policies on what they would and would never do”, Wille added, warning that many options carry risks. “You can’t just ring the gang leader’s front door,” she explained. “You have to build your contacts very carefully. But sometimes you have to go through some dodgy people.”

Wille gave the example of a group of NGOs that she consults with regularly that was recently able to arrange a convoy through a gang-run area thanks to the assistance of religious leaders who were in close contact with key people in the armed groups.

Isabel Marquéz, deputy director for the Americas at the UN’s refugee agency, UNHCR, added that using existing networks – such as local aid groups and community organisations – can help facilitate such openings.

The ICRC has had many years of dealing with similar situations elsewhere, namely in parts of Colombia and the VRAEM region of Peru – both settings where it engages with local groups and community leaders in areas where armed groups operate.

“Those who have been involved in fighting see you for what you do, if you do it well and with transparency for all those involved,” Orr said.

Building acceptance among local communities in Haiti has been key for NGOs such as Christian Blind Mission, a German NGO providing assistance to people with disabilities.

“We deal with all the hostile actors in a certain area and try to build a level of acceptance with each of them – be they corrupt officials, checkpoint staff, armed militias or violent gangs,” Tom van Herwijnen, the group’s global security manager, said, adding that it uses intermediaries to establish contact with gang leaders.

In Haiti, this might mean dealing with someone like Gana Ti Zile, whose nickname means “small island” in Creole. He is a member of the G-Pep gang in the Brooklyn neighbourhood of Cité Soleil, a sprawling shantytown of some 400,000 people near the capital’s port where gang activity has been a fixture for decades.

Esther Dupain’s mother was shot and killed by gang members before they set her house on fire in Martissant last year. Now, she is among some 19,000 who have been displaced by gang violence.

Gana Ti Zile said he has acted as an intermediary to facilitate access for Concern Worldwide, an aid group that has long worked in Haiti.

While Concern would not confirm having contact with gang members, Fiona Gannon, its regional director, said the group “works with a number of community facilitators who come from gang backgrounds in Haiti.

“This is fully consistent with our approach to engagement in conflict settings such as the urban context in Haiti where there is a high risk of violence and insecurity,” she added. “The engagement of community facilitators ensures the safe delivery of humanitarian services and conflict-resolution programmes that aim to break down barriers between communities and to promote dialogue.”

Another organisation working in Cité Soleil, AVSI, said that being known by local gangs for its community work had facilitated access. The Italian organisation provides psychosocial and nutritional support, and gender-based violence care for women and children.

Even after points of contact within the gangs have been established, changes in their leadership or approach can disrupt operations, causing loss of access and months of new trust-building discussions, explained Flavia Maurello, AVSI’s programme coordinator in Haiti.

Maurello recalled this happening in early 2021 in Village de Dieu, a shantytown in the capital, following the assassination of one of the country’s most powerful gang leaders. “Now, it’s figuring out who to talk to, and who is ruling which area,” she said.

In December, after weeks of escalating unrest, AVSI had to temporarily close its field office in Martissant, located in what Maurello called the “death zone” – a neighbourhood from which thousands had fled violence earlier in the year.

The knock-on effects of the capital’s gang violence are keenly felt in Haiti’s southern peninsula, which bore the brunt of the August 2021 disaster and was hit by a second earthquake late last month that killed two people and destroyed hundreds more buildings.

The delivery of aid to the region has been patchy due to damaged roads and bridges, but also because of roadblocks erected by gangs.

In Haiti, when nature is not violent it’s armed criminal gangs that dish out violence, render government irrelevant