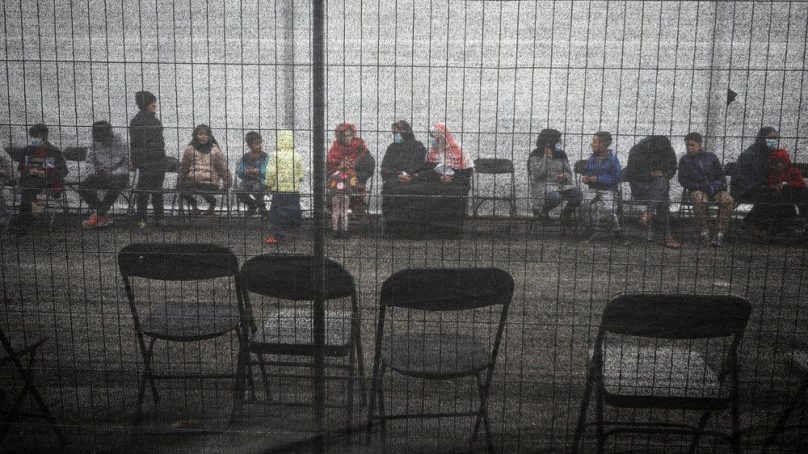 As the Taliban regained control of Afghanistan late last summer, Qassim Rahimi packed the odds and ends of his life into bags and joined the crowds forming at the gates of Hamid Karzai International Airport in the capital, Kabul.

Forty-eight hours later, the 33-year-old left his lifelong home behind in the belly of an American military transport plane, bound for a new and uncertain beginning in the United States.

When the Taliban fell in 2001, his people, the Hazara – who had been persecuted under Taliban rule – welcomed regime change from their homeland in the mountains of central Afghanistan. Over the following years, Rahimi pursued a career in the country’s growing journalism sector, eventually moving to Kabul for a job in a press office of the Western-backed Afghan government.

As the Taliban swept back to power last summer, fighters seized the office building where Rahimi worked, including the journals, credentials and computers that were inside. Reports of retribution attacks against people associated with the Western-backed government poured in, and Rahimi, who had friends and colleagues who were assassinated by the Taliban in the past, feared he would be a target.

His escape from Kabul was the beginning of a whirlwind three-month journey, taking him through military bases in the Middle East, Europe, and, finally, Wisconsin, before landing him in Kansas City, Missouri – a city of around 500,000 people in the Midwestern US – in November.

Rahimi is one of around 76,000 Afghan evacuees who have arrived in the US following the US withdrawal from Afghanistan and the Taliban’s return to power last August. The evacuees are not technically refugees because they did not go through the US refugee resettlement process, which takes place while people are outside the US. But to help the Afghans integrate into new communities, the US is relying on a network of refugee resettlement agencies in communities across the country.

That network, however, was decimated during Donald Trump’s presidency and has yet to fully recover. As a result, at the end of January – five months after the evacuation effort from Kabul finished – around 12,500 Afghans were still living on military bases in the US waiting to be matched with resettlement agencies to help them find housing and begin settling in. Following a push from the administration, that number has since fallen to around 4,000.

As a former spokesperson for Afghanistan’s Environmental Protection Agency, Rahimi frequently interviewed with national media outlets. When the Taliban returned, his very public presence put his life at risk.

At the same time, the administration of US President Joe Biden has set the refugee resettlement ceiling for fiscal year 2022 (which runs October-September) at 125,000. Advocates have praised the target, but many also worry that – due to the damage done during the Trump years – the evacuees and newly arriving refugees won’t be able to receive adequate support.

Rebuilding capacity “is not like a light-switch thing to flip,” Kelly Agnew-Barajas, director of refugee resettlement for Catholic Community Services of New York (CCSNY), a resettlement agency in New York City, said. “Agencies have experienced such significant reduction in federal revenue because of these truly unprecedented and drastic cuts in resettlement.”

The primary aim of federal assistance for refugees admitted to the US is to put them on a path to economic self-sufficiency. During their first 90 days in the country, government-funded resettlement agencies cover costs ranging from rent and furnishings to clothing and transportation to job interviews. After that, refugees are expected to be able to cover these basics on their own.

Support, however, doesn’t completely dry up. Through a mixture of federal grants and private donations, resettlement agencies continue to provide services – such as professional development training, language and financial literacy courses, and mental health counselling – to support the integration process. Refugees are technically entitled to this aid for five years, but availability is heavily dependent on the amount of federal funding allocated to service providers.

“Five years is really around the time that someone would naturalise as a [citizen],” Agnew-Barajas said. “Part of the thinking built into this timing is maybe someone’s family is arriving, or they are in crisis, or they need just extra support for some reason.”

Dying in Haiti: A gangland where UN and International aid agencies hire armed criminal escorts to ferry food to the needy

Coming to America II: Tales of broken dreams, despair and attempted suicide in US refugee centres