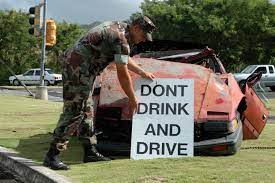 As drug abuse has become prevalent, so, too, has the crime of driving while under the influence of drugs. Today, a police officer who observes someone driving erratically but finds no alcohol in their breath must decide if the putative offender is ill, tired, distressed or whether they are under the influence of any other drug.

Breath tests for drugs are now being developed, but this is a much more complex analytical exercise than testing for alcohol could ever be. Few drugs are as volatile as alcohol is and there are many different compounds to test for.

A negative test for ethanol is enough to prove that a driver is not drunk, but a negative drug test might mean that the drug taken was not one of those tested for. And almost all drugs – prescription drugs, which can seriously affect a patient’s ability to drive, as well as drugs of abuse – are chemically much more complex than ethanol.

Testing drivers for drug use is still a complex analytical business involving blood or urine assays in a hospital clinical lab – but perhaps for not much longer. “A bit over 10 years ago we were challenged to develop a non-invasive breath test for drugs that could be used at the roadside,” says Olof Beck, a toxicologist at the Karolinska Institute in Stockholm, Sweden. “Many people thought this would be extremely difficult, but we have finally succeeded.”

And when such a piece of kit is eventually rolled out, roadside tests will not be its only use. Drug tests on prisoners have generally involved urine samples, but prisoners can find ways to cheat. “It is much harder to cheat in a breath test, as these can be observed easily,” adds Beck.

Non-volatile compounds are exhaled in aerosol particles: tiny droplets of liquid that are formed during normal breathing. If a subject has recently consumed a non-volatile drug substance, that substance can be detected in a sample condensed from those aerosol particles.

Beck and his co-workers are developing a device that will collect a useful sample if a subject breathes normally into it for a few minutes. This sample can be taken to a forensic lab and tested for a variety of drug compounds using tandem liquid chromatography mass spectrometry (LC–MS), a technique that is sensitive and reliable enough for its readings to be used in court.

The compounds tested for can include all main drugs of abuse, some newer psychoactive substances and therapeutic drugs that may be misused, including opioid painkillers.

No LC–MS machine has yet been designed that is fast, simple and portable enough for use at the roadside, even for screening, but it is not impossible to imagine that such a device will be used one day. And moving just the sample collection from the police station to the roadside would have many advantages.

Cannabinoids, for example, are metabolised rapidly, so transporting a suspected cannabis user to the police station in time to obtain a sample that will test positive is a challenge.

One further problem that forensic toxicology needs to address is a growing tendency to combine alcohol and drugs. A user may even think that half a pint and a single spliff will be OK, as both these are relatively harmless separately.

However, the combination is more than additive, even when the quantities are small enough for both tests to separately come out negative. “Drivers under the influence of both drink and drugs have been involved in many fatal accidents,” says Beck.

And breath analysis probably has more diagnostic applications than it has forensic ones. Exhalation Technology is a small start-up company based in Cambridge, UK, specialising in testing exhaled breath condensate (EBC).

It has an interesting history, as Stig Brejl, one of its directors, explains. “Racehorses often suffer from an asthma-like condition that affects their form, and it is important to diagnose this early enough to pull an affected horse from a race. Working with David Marlin at the Animal Health Trust in Newmarket, UK, we identified hydrogen peroxide (H2O2) in horse breath as an inflammatory biomarker for this condition and developed a diagnostic device that can be used without veterinary training.”

Understanding that humans have similar respiratory physiology to horses, Brejl and his colleagues investigated the possibility of using a similar test for clinical diagnostics. The outcome of this study was Inflammacheck, a hand-held device for collecting breath condensate and measuring hydrogen peroxide concentrations.

In humans, this is a biomarker for oxidative stress caused by lung inflammation that is found in patients with chronic obstructive pulmonary disease (COPD) and severe asthma. Interestingly, the dominant inflammatory biomarker in patients with mild asthma is a different one – fractional exhaled nitric oxide – and this, plus the spirometry (peak flow) tests that patients with severe disease find difficult to use, is often used for diagnosis.

With Inflammacheck, patients breathe normally into the device for a minute or two, generating about 20µl of condensate that flows into a capillary chamber attached to a sensor with a coating based on horseradish peroxidase.

When the sensor is exposed to the sample, an enzymatic process takes place generating a tiny but detectable signal on the sensor; the signal strength indicates the hydrogen peroxide concentration. “This assay is fast, and it has two further advantages: it is precise enough to be used with a tiny amount of sample, and it can be embedded in a hand-held device,” explains Brejl.

Inflammacheck was first marketed in September 2019, a mere six months before respiratory medicine – and much else – was upended by the Covid-19 pandemic and most COPD clinics forced online or made to close. Brejl and his team, however, rapidly pivoted to developing a diagnostic test for Sars-Cov-2 infection. “Inflammatory markers are not specific enough to diagnose a particular viral infection, so we had to use a different type of test,” he explains.

As many of us have learned to our cost, active virus particles are carried on an infected individual’s breath. If that individual breathes into Exhalation Technology’s new CoronaCheck device, the condensate flows to a sensor where virus particles are bound. These can then be detected by a Sars-Cov-2 specific biosensor, generating an electrochemical readout in only 2-5 minutes, faster than the approved lateral flow tests.

This non-invasive device is currently in clinical trials at Portsmouth Hospitals NHS Trust. “The kit includes a multi-use reader and a set of single-use consumables for sample collection, so it is completely safe,” explains Brejl. “We are now investigating ways to reduce the amount of plastic in the single-use set from 85g to about 6g.” Furthermore, if the test is approved, it should be quite easy to adapt it for detecting other respiratory viruses.

Vaccines are already promising us one way out of this pandemic. Once it has passed, will a new “roaring twenties” unleash a further wave of reckless drivers? Or do further and, potentially, more dangerous pandemics lie ahead? Whatever the future holds, both forensic and diagnostic breath testing will undoubtedly help us to stay safe and well.