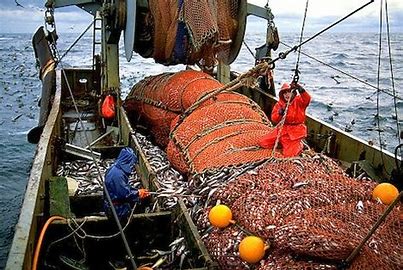 Tickled by sunlight, life teems at the ocean surface. Yet the influence of any given microbe, plankton or fish there extends far beyond this upper layer. In the form of dead organisms or poop, organic matter rains thousands of feet down onto the seafloor, nourishing ecosystems, influencing delicate ocean chemistry, and sequestering carbon in the deep sea.

But humanity’s taste for fish may have disrupted some of that cycling, according to new research that was published on October 8 in Science Advances. A team of scientists in the US and Canada modelled the historic change in biomass of commercially targeted fish species and their influence on ocean biogeochemical processes.

The researchers estimate that before industrial fishing developed around 1900, the faecal matter of these species accounted for around 10 per cent of biological material sinking to the seafloor – enough to contribute considerably to carbon sequestration, nutrient fluxes and ocean chemistry in the deep sea.

By 1990, when industrial fish catch peaked, the biomass of exploited species – and their poop’s influence – had fallen by roughly half, with potential knock-on effects on the deep-sea food web.

The study “does a good job of really placing the role of fish in the context of these massive, global-scale processes of cycling,” says Jacob Allgeier, an ecologist at the University of Michigan who focuses on coastal tropical systems and who wasn’t involved in the research. “These certainly aren’t exact numbers, but [that] they can just put some loose estimates on these roles is a really important contribution.”

Scientists studying interactions between marine life, climate and ocean circulation have long focused on the role of photosynthesising plankton and microbes, which are responsible for much of oceanic nutrient and carbon cycling, notes Daniele Bianchi, an oceanographer specializing in biogeochemistry at the University of California, Los Angeles.

But around 2015, he and his colleagues became curious about larger organisms like fish. They set out to develop a global fisheries model, similar in spirit to global climate simulations, which could estimate the biomass of ocean fish and its influence on biogeochemical cycling.

The model was based on ecological theory and simulated primary production by photosynthesising plankton, energy transfer through the food web and fish populations. Focusing on commercially targeted fish, crustaceans and mollusks between 10 grammes and 100 kilogrammes in weight, Bianchi and his colleagues used the model to project the amount caught by fisheries worldwide and the total animal biomass in the water, using official catch data and scientific stock assessments to constrain the results.

Before the 19th century, they estimated, these targeted species accounted for around 3.3 billion metric tonnes of biomass in the ocean – a figure that dwarfs the current weight of humans of less than one billion metric tonnes. (In a rougher calculation, nontargeted fish species represented a similar figure). By 1990, the biomass of targeted species had fallen by 47 per cent, give or take 20 per cent – a figure that falls in the range of previous estimates of global fish depletions over the past century.

Although this biomass decline is broadly what traditional fisheries theory would consider sustainable and profitable in the long term, marine ecologist Clive Trueman of the University of Southampton notes that the figure conceals the fact that many fish stocks were harvested well above levels at which they can regenerate, leading to significant population declines by the time fishery restrictions were widely implemented in the 1990s and 2000s.

Even today, more than a third of fish stocks are considered to be exploited at biologically unsustainable levels.

Of more interest to Bianchi were the broader impacts of fish biomass. The team estimated that prior to industrial fishing, targeted species guzzled around two per cent of global primary production – that is, organic, carbon-containing compounds produced largely by photosynthetic life – by consuming mostly phytoplankton, which account for nearly half of total primary production on Earth.

Much of the consumed material whizzes to the seafloor as fish poop or “faecal pellets”, where the carbon inside can stay stuck for hundreds of years. Fish poop is heavier and faster-falling than the snow-like organic waste from smaller creatures, making it “one of the most effective natural carbon sequestration mechanisms that we know,” Bianchi says.

Before industrial fishing, targeted fish accounted for around 10 percent of all biologically sequestered carbon in the deep ocean, the team estimates.

Organic carbon and the nutrients in fish poop also feed the food web at the seafloor, which relies on organic matter from above. Deep-sea life consumes oxygen in the process of devouring fish feces, helping maintain a sensitive chemical balance that ecosystems are adapted to.

In fact, fish poop from exploited species once drove around 10 per cent of oxygen consumption in the deep sea, and perhaps up to 20 per cent in the deepest ocean, the team writes in their paper. The takeaway from these estimates, Bianchi says, “is that fish actually matter for these cycles. They potentially alter the way carbon is sequestered in the ocean.”

As the biomass of targeted fish declined, the carbon sequestration, nutrient transport and chemical effects associated with their poop fell by roughly half by 1990, the team estimate. Bianchi notes these figures are back-of-the-envelope calculations, as firm figures are hard to pinpoint. But overall, fisheries-linked changes in biogeochemical cycling are of similar magnitude to impacts caused by climate change on such processes, the team writes.

“The point that we want to make is that this is not a negligible number,” Bianchi says. “My hope is that we put this on the radar, and there will be more research to try and understand the cascading effects of [altering] the marine ecosystem . . . on carbon, nutrients, and oxygen.”

How many fish were in the ocean before industrial fishing, and their contribution to global biogeochemical cycles are fundamentally important, yet extremely difficult questions to answer, says Trueman, who wasn’t involved in the new research.

For instance, both Allgeier and Trueman note that it’s not immediately clear to what extent the team accounted for the fact that some fish poop gets recycled back into the food web before it reaches the seafloor, where carbon is sequestered.

Rather than a discrete pellet, most fish faecal matter is loose, with plenty of surface area for microbes to attach to it and digest it as it sinks. “I have seen a lot of fish poop, and it’s rarely a pellet,” Allgeier says. He adds that, at least at first glance, the team didn’t seem to account for the different species identities of the targeted fish, which bears on all aspects of their role in biogeochemical cycling.

“But at this scale, I don’t really expect them to do that,” he says. “The scale at which they’re operating is insane: it’s the global fish biomass.”

Allgeier and Trueman agree that these limitations and uncertainties aren’t reason to dismiss the results. “Even if you didn’t want to put a lot of money on the absolute numbers,” Trueman says, the study provides a useful framework to explore questions about fish and their biogeochemical impact, and study how sensitive the outcomes are to different variables, such as how metabolic rate scales as a function of body size, for instance. “That’s a useful contribution in itself,” he says.

The study also draws attention to the role of fish in global biogeochemical cycles, which has only recently begun to be appreciated, Trueman says. In fact, he suspects that the study might underestimate the overall role of fish, as it excludes those smaller than 10 grammes, which are “by far the most abundant vertebrates on the planet,” he says.

As for the impact of fisheries, Allgeier adds, “I think that studies like this show that those effects are real and that we need to better understand them because we’re learning how important these biogeochemical cycles are.”

Indeed, Bianchi hopes the findings will spur more research into humanity’s true impact on the oceans. Compared to terrestrial ecosystems, “We don’t think the same way about the ocean because we don’t see it, we don’t live in the ocean,” he says. “There are so many ramifications like [the ones we describe] for carbon and oxygen. . . . And there might be many, many more.”