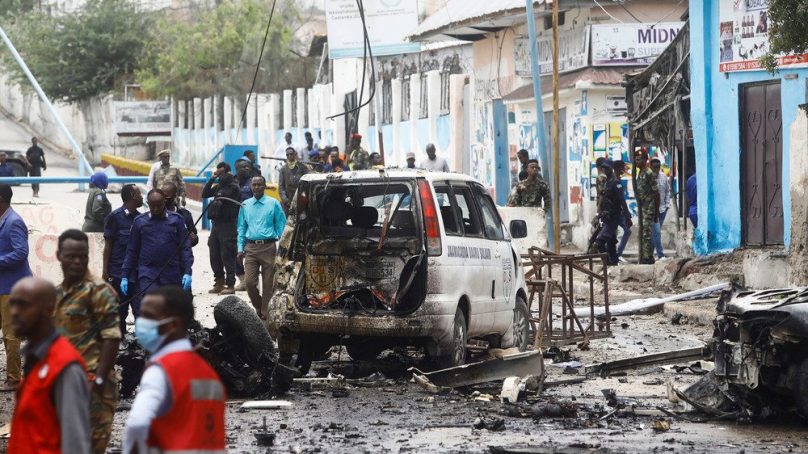 ‘I’ve been caught three times in explosions and gun battles already, and I worry that one day my luck might run out.’ I can’t take this city anymore – I need to get out. I’ve spent 10 months trying to build a better future for myself, and now I admit defeat.

Nearly all my life I’ve lived as a Somali refugee in Dadaab, a sprawling complex of camps stuck in an arid corner of northeastern Kenya – dependent on humanitarian handouts.

I always wanted more than that. Friends of mine have returned to Somalia and succeeded: They are fulfilling their potential; they’re making a difference – so why not me?

But what I didn’t bargain for were the bombings, the shootings, the unpredictability of the violence here. It has been so bad that I’m now ready to go back to Dadaab. Your life as a refugee is dull and monotonous – but at least you’re alive.

I’ve been caught three times in explosions and gun battles already, and I worry that one day my luck might run out. I stay off the streets as best as I can – confine myself to the house – but this is merely surviving, not progressing.

I left Dadaab in January because there didn’t seem to be a future there. More of a small town than the kind of refugee camp you might imagine, it has existed for almost three decades. But in recent years the Kenyan government has repeatedly threatened Dadaab with closure – each warning more serious-sounding than the last.

The Kenyan authorities view Somali refugees as a security threat – or that’s what they say publicly. They link us to the Somali-based jihadist group al-Shabab, which has launched bloody, high-profile attacks inside Kenya, trying to punish Nairobi for opposing them.

But the Kenyan government has never provided proof that connects Dadaab to terrorism. I appeal to Kenyans not to lose sight of their historically generous hospitality towards hundreds of thousands of refugees from the region that have found sanctuary in their country.

In my case, my family came to Kenya when I was two years old, escaping the drought and clan violence in southern Somalia that killed my father. Dadaab – one of the world’s largest refugee camps – fed us, educated us, and kept us safe.

I’m 33 years old now. Until recently, I had known no other place. But Dadaab has never quite felt like home: always transient, a place where you waited for resettlement, or repatriation – not where you could put down roots. That’s the life of a refugee, I guess.

I have no recollection of Somalia as an infant. But to my mind it had always been more of my home country – a troubled and fragile place to be sure, but somewhere that would accept me, where I could belong.

My friends who had returned to Somalia also encouraged me to leave. They said there was work in Mogadishu for people like me with a diploma. As I don’t have a wife, or anything really tying me to Dadaab, I felt I should take that chance.

Before arriving in Mogadishu, I had lined up a job with an international company doing online surveys of people’s attitudes to COVID-19. I send out questionnaires to WhatsApp groups I find and gather the responses. I also teach a bit of English in the neighbourhood where I live, with my aunt and her extended family in a four-room house.

I make more money here than I did in Dadaab, where I worked as an advocacy supervisor for an international NGO. But it’s not the big money I had hoped for.

I know I could earn more if I went out and hustled, but I’m afraid. I don’t understand how Mogadishu people live with the constant danger – they just shrug it off. But for me, hearing explosions once or twice a week is not normal.

I’m still registered as a refugee in Dadaab. To keep my options a little more open, I didn’t join the formal refugee repatriation programme – an agreement between Kenya, Somalia and UNHCR, the UN’s refugee agency. The programme provides refugees with free transport, rations and a stipend – all designed to encourage them to return to Somalia, but it would have meant renouncing my refugee status.

Instead, I made my own way to Mogadishu. On a Friday morning late in January, I said goodbye to my mum and family, walked over to the bus park next to the animal market, and boarded a five-seater taxi to the Somali border town of Dhobley.

It’s less than a 100 kilometre-drive, but it took us five hours. It’s not just that the road is bad, but it’s also the number of checkpoints at each town where the police get you out of the car to scan your documents and interrogate you about your journey.

They want to see your “refugee proof sheet”, showing you’re registered in Dadaab. As a refugee, traveling to Somalia is permissible without any special warrants – it’s heading into the interior of Kenya that’s not allowed.

The security forces are on high alert in the border regions. There are regular ambushes by al-Shabab. My heart sank at each burnt-out police vehicle, or hastily cleared logs used to barricade the road that we passed.

You’re warned that if the jihadists stop you and find documents bearing government logos, you’re assumed to be a spy and in deep trouble. They also don’t want to see the symbols of humanitarian organisations, which they regard as serving the interests of the West.

I was carrying dozens of certificates to use in job applications – richly decorated with flags and emblems – and was really on edge.

“They also don’t want to see the symbols of humanitarian organisations, which they regard as serving the interests of the West.”

It got worse when we got to Dhobley. Heavily-armed Kenyan police stood on either side of a metal barricade and motioned with their rifles for us to get out of the vehicle. As we approached, we were told to lift our shirts so they could see if we were carrying concealed weapons or explosives.

After two hours of questions, checks, and searches, we were finally allowed to proceed into Dhobley – a bullet-scarred town that has seen decades of fighting: it’s now controlled by the Kenyan contingent of AMISOM, the African Union’s intervention force in Somalia.

For the next stage of the journey, I intended to fly. The road from Dhobley to Mogadishu is too dangerous: Villages and whole stretches of bush are under al-Shabab control, especially the Shabelle region, south of the capital.

But first I had to buy the ticket. As in Kenya, most Somalis use mobile money for transactions. But I didn’t have their “EVC” system on my phone. I was stumped until I was told to go and find a money-changer – in a town swarming with people with guns!

I paid the equivalent of $150 to the airline with wads of worn-out physical currency notes, boarded the flight, and an hour later was in Mogadishu.

I arrived in the city as tensions were rising between President Mohamed Abdullahi Mohamed – widely known as Farmajo – and the opposition over delayed elections. Farmajo’s opponents accused him of clinging to power beyond his legal mandate, and by February there were clashes between rival units of the politically divided security forces.

During one gun battle in March, we all fled my aunt’s home. The walls of the house are too thin. I was worried the bullets might pass through and kill or wound us.

That tension has not fully gone away. The political confrontation now is between the president and his prime minister over the still-delayed elections. The military remains split, mediation efforts are struggling, and I’m not sure what will happen next.

On top of that is the al-Shabab threat. They are able to penetrate the city almost at will. Last month, a suicide car bomber killed at least eight people in an attack on a convoy heading to Villa Somalia, the president’s offices.

“The walls of the house are too thin. I was worried the bullets might pass through and kill or wound us.”

So as I said, enough is enough. I’ve begun checking on flights back to Dhobley. But I’ve had a nasty shock. Diplomatic relations between Kenya and Somalia have soured over a maritime dispute. Most commercial airlines are based in Kenya and have reduced their services and doubled their fares – I don’t know if it’s related to the row.

I can’t afford to make the journey right now, so I’m in limbo. I’ve got to hang on here for a little while longer until I can save up enough.

There’s a Somali proverb, ‘the injury you expect is always less painful’. I will never get used to the fear and violence – but at least awareness, after all these months, is making it just a little easier to bear.