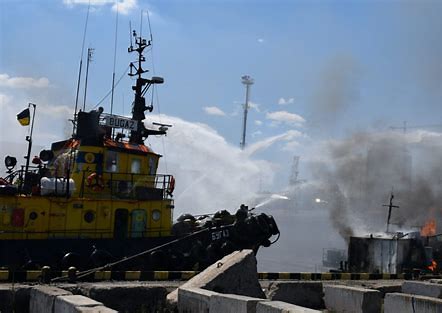 Russian Foreign Minister Sergey Lavrov on Monday said that strikes on the Ukrainian main port city of Odesa “should not affect” grain exports.

A Russian attack on Saturday came just hours after Moscow and Kyiv reached an agreement in Turkey on grain shipments leaving Ukrainian ports, sparking fears that the Kremlin would not go through with the deal.

Lavrov said the strikes targeted “the military part of the port,” which are at a “considerable distance” from the grain terminal. The top Russian diplomat is currently speaking on a visit to Congo-Brazzaville, insisted that agreeing to the grain deal did not mean that Moscow would halt striking Ukrainian “military targets.”

“There is nothing in the obligations that Russia took on that would forbid us from continuing the special military operation,” Lavrov said, using the Kremlin’s term for the conflict.

Meanwhile, Kyiv said on Monday that the first grain shipments under the UN-backed deal were expected to be exported “this week.”

“Our position is very simple. We signed an agreement with the UN and Turkey. If the sides guarantee security, the agreement will work. If they do not, it will not work,” said Ukraine’s Infrastructure Minister Oleksandr Kubrakov, who was part of the talks in Istanbul.

On Sunday, Lavrov expressed the objectives of Moscow’s war on Ukraine in some of the bluntest terms yet – saying the Kremlin is seeking to topple the Ukrainian government in Kyiv. Lavrov claimed that Russia was determined to help Ukrainians “liberate themselves from the burden of this absolutely unacceptable regime.”

“Russian and Ukrainian people would continue to live together. We will certainly help Ukrainian people to get rid of the regime, which is absolutely anti-people and anti-historical,” Lavrov said.

Western governments have lauded democratically elected Ukrainian President Volodomyr Zelenksyy for his leadership during the war. Lavrov accused Zelenskyy’s government and its Western allies of spouting propaganda intended to ensure that Ukraine “becomes the eternal enemy of Russia.”

The Kremlin had earlier emphasised that Russia wasn’t seeking to overthrow the government in Kyiv, even as Russian forces closed in on the Ukrainian capital in the early weeks of the war before retreating and focusing on the eastern Donbas region.

Lavrov made his remarks during his trip to Africa as Russia seeks to strengthen its ties to the region amid increasing isolation, largely placed on Moscow by the West due to the invasion of Ukraine. The Russian foreign minister visited Egypt and the Republic of the Congo, and is due to head to Uganda and Ethiopia.

Russia has already had strong influence in Africa, whether through investments or the presence of the controversial Russian military Wagner Group in some African countries. African leaders have hardly taken sides in regards to the war in Ukraine, although the blockade of Ukrainian grain exports has affected food security in the continent.

Ukrainian presidential aide Mykhaylo Podolyak criticised Lavrov’s visit to Africa, calling it a cynical ploy by Moscow after it had fuelled the food crisis.

“Lavrov’s trip to Africa is the quintessence of Russian sadism. You arranged the artificial hunger and then come to cheer people up,” he wrote on Twitter, assuring that Ukrainian grain will reach its destinations.

Japan reports 12 million new cases, 32,000 deaths of Covid as authorities warn the worst is yet to come