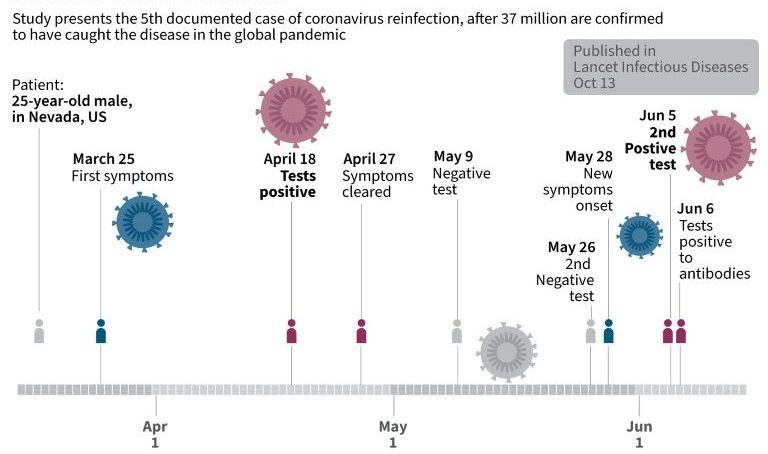 Most people who catch and recover from Covid-19 are likely to be immune for several months afterwards, a study of more than 20,000 health-care workers in the United Kingdom has found.

The study – called SARS-CoV-2 Immunity and Reinfection Evaluation (SIREN) – concluded that immune responses from past infection reduce the risk of catching the virus again by 83 per cent for at least five months.

Over the course of the past year, reports of repeat infections with SARS-CoV-2 have shaken confidence in the immune system’s ability to sustain its defences against the virus. The interim results from the study assuage some of those fears, said SIREN lead investigator Susan Hopkins, a senior medical adviser at Public Health England in London, at a press briefing.

The data suggest that natural immunity might be as effective as vaccination, she added, at least over the five-month period the study has covered so far.

The data suggest that repeat infections are rare – they occurred in fewer than one per cent of about 6,600 participants who had already been ill with Covid-19.

But the researchers also found that people who become reinfected can carry high levels of the virus in their nose and throat, even when they do not show symptoms. Such viral loads have been associated with a high risk of transmitting the virus to others, said Hopkins.

“Reinfection is pretty unusual, so that’s good news,” says immunologist John Wherry at the University of Pennsylvania in Philadelphia. “But you’re not free to run around without a mask.”

SIREN is the largest study of coronavirus reinfection that systematically screens for asymptomatic infections, said Hopkins. Every two to four weeks, participants undergo blood tests for SARS-CoV-2 antibodies as well as PCR tests to detect the virus itself.

Over the five months, the team found 44 possible reinfections. In the group of 14,000 participants who had not been previously infected, 318 people tested positive for the virus.

Some of the reinfections are still being evaluated, Hopkins said. All 44 are considered ‘possible’ reinfections, and were classified on the basis of PCR tests combined with screening measures to reduce the risk of re-detecting virus from the initial infection.

So far, only two of these 44 cases have passed more stringent tests to be classified as ‘probable’. The study did not assess whether symptoms were better or worse during the second infection than during the first, but Hopkins notes that only about 30 per cent of the people with possible reinfections reported any symptoms, compared with 78 per cent of participants with first-time infections.

At the moment, the team does not have enough data to tease out who might be most at risk of reinfection. And immunologist George Kassiotis at the Francis Crick Institute in London notes that participants in the study were mainly women, and mostly under the age of 60.

“This group is unlikely to experience the most severe form of Covid-19,” he says, “and may not be representative of the population as a whole.”

Investigators are still collecting data; they hope to get a sense of how long immunity lasts and to investigate the effects of a SARS-CoV-2 variant called B.1.1.7 that emerged in 2020 and has rapidly spread across the country.

Although there are many reasons to suspect that existing protection should cover new variants, it is possible that immune responses raised against one variant will be less effective against another, says Kassiotis. “It is still an open question.”