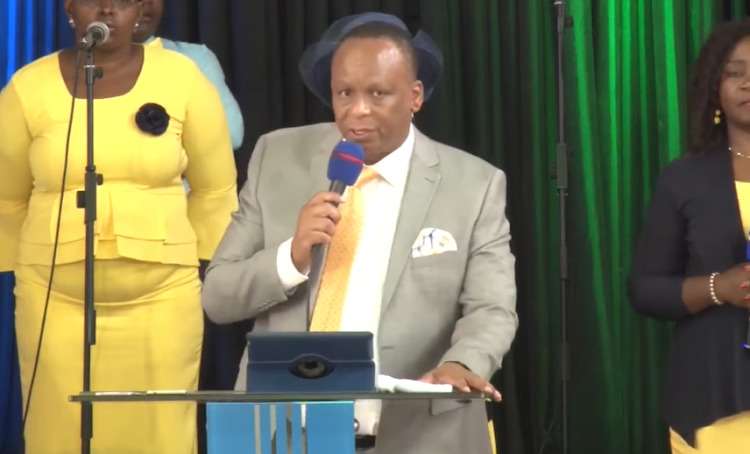 Kenyan President Uhuru Kenyatta and opposition leadership have come under stinging criticism for putting their love for power and money above of the safety and basic needs of millions of Kenyans grappling with the devastating effects of coronavirus pandemic.

On a weekend that saw thousands of travelling Kenyans caught off-guard by the latest containment measures to rein in the pandemic that has claimed 2,117 lives and over 130,000-plus others testing positive – among them prominent politicians, the clergy, doctors, teacher and essential services providers, religious leaders questioned the sensitivity of the president and opposition leader Raila Odigna who they roundly accused of holding “super spreader” rallies that experts say triggered the marauding third wave. The ministry announced 91,754 recoveries.

On the streets of Nairobi, ordinary Kenyans angered by the president’s decrees concur with Pefa Church Bishop Peter Ambuka who in sermon delivered virtually, described Mr Kenyatta as confused, clueless, detached from reality and careless in the manner he has handled the disease.

Since theft of money running into millions of dollars set aside to mitigate the pandemic came to light last year, the president has not taken action against senior ministry officials linked to the scandal to the chagrin of taxpayers.

The “Covid-19 billionaires” as the perpetrators of the heist are known, some close relatives and friends of the president are known, are still free and unperturbed by public calls for their indictment.

The latest upsurge in coronavirus, roughly a year since the first case was reported last March, has forced the government to place five counties including under lockdown, and curfew extended by four hours.

The decision has been criticised by the public that blames the political elite for ignoring the World Health Organization (WHO) protocols for containment of the pandemic.

Kenya is in the throes a constitutional amendment to expand the executive, but religious leaders – both Christians and Muslims – have termed the push as unnecessary and ill-advised in the face of a disease that threatens the security and economic wellbeing of a country already battered by the disease that has not shown signs of receding.

In Nairobi and four surrounding counties, the restrictions have a negative impact on businesses and movement. This has elicited hue and cry from small- and medium scale enterprises sagging under the weight bank loans and subdued clientele.

The excoriation of president was across the board by a public that feels hard done by the restrictions on movement and reduced working hours.

The public wants the president and opposition supremos take responsibility for the suffering the pandemic has visited on citizenry.

“You [President Kenyatta] and your fellow politicians are to blame for this devastating third wave and the buck stops with you,” a number clergymen echoed the indictment by Bishop Ambuka in a delivered virtually on Sunday.

“Mr President, you and your fellow politicians are to blame for this devastating third wave of Covid-19 infections in the country. Unfortunately, it is we the ordinary people who have to suffer the consequences,” he said.

Bishop Ambuka termed as “careless” actions by politicians led by the president during campaigns for Building Bridges Initiative rallies, now deemed super-spreader events. Building Bridges Initiative is the codeword for constitutional amendment. The cleric also took issue with Kenyatta’s deputy William Ruto who picked the cue from the president to relaunch his 2022 presidential bid.

“Dear Mr President, do you really have a strategy for fighting this pandemic or your only strategy is lockdowns and curfews? Mr President, you should have come up with a plan on how to totally eradicate the virus within these five counties. I expected that you would initiate a massive testing and vaccination programme that would reach the inhabitants of all these five counties,” the bishop said in a sermon that was delivered virtually.

The bishop stressed that the “careless” actions by politicians led by the president compromised the gains that had been made in coronavirus containment and appealed to him to launch mass testing and vaccination programmes to reverse the situation.

In his view, curfews and lockdowns will do little to halt infections. He explained that the latest measures taken by the president were insufficient and were likely to keep Kenyans in a vicious cycle of lockdowns and curfews.

The bishop admonished the president further, “You continue living your lavish lifestyles thanks to the taxes we continue to pay even as we lose our source of income.”

The doctors’ union said last week that the country had run out of Intensive Care Unit beds, which are mostly occupied by Covid-19 patients.