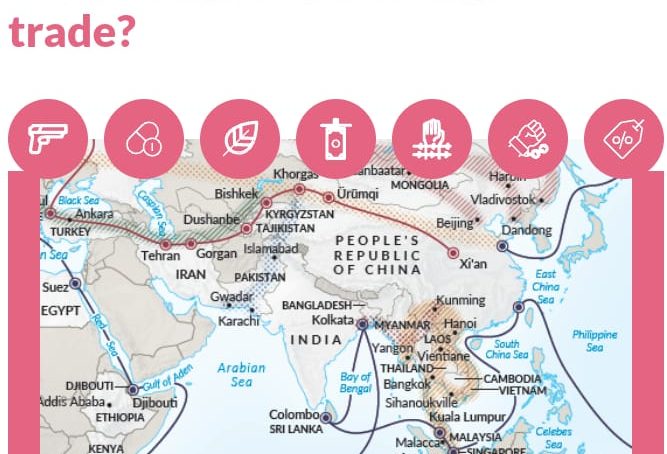 Kenya is the focal point in Africa for China’s New Silk Road project that is expected to create terrestrial and maritime trade and commerce networks that link African, European and Asian countries. And danger looms, experts warn.

From sounding initially as grandiose and unachievable when it was mooted nearly a decade ago, the project officially known as Belt and Road Initiative now poses a new dilemma: could this be a mega deception by the Dragon to waggle into Africa under-exploited wealth?

So, when Chinese President Xi Jinping described the Belt and Road Initiative (BRI) as the “project of the century,” he might have sounded overly ambitious, says Global Initiative Against Transnational Organised Crime (GI-TOC) in its latest report that focuses on state-sanctioned “corporate crimes.”

After years of trying to unpack the project will cost being between $4and $8 trillion and will cover 60 countries in Africa, Middle East, Asia and Eastern Europe, GI-TOC says, “The reality is that it is hard to find a project that can rival the scale and reach of Beijing’s New Silk Road.”

Eastern Africa – Kenya, Ethiopia, Djibouti, Somalia, Tanzania, Uganda, South Sudan and Mozambique – tops the regions that are expected to be transformed by the project that co-opts many other countries in Western Europe.

There is apprehension though: GI-TOC warns that China is laying the groundwork to access Africa’s vast mineral, wildlife and energy resources on the cheap.

Countless articles have been written and discussions have been had on what is deemed to be a game-changer in terms of connectivity among regions, volume of trade, and investments, GI-TOC explains in the report published in March.

As a result of its complexity, the various strands of the project are belts in the name that include a maritime silk road. It is estimated that the “infrastructure corridors spanning some 60 countries, primarily in Asia and Europe but also including Oceania and East Africa, will cost an estimated $4-8 trillion.”

The agency observes that “with its land and maritime economic corridors, roads, ports, railways, special economic zones, industrial parks, mines and pipelines, telecommunications networks and urban development projects, the BRI has also attracted the attention of criminal entrepreneurs at the national and transnational level.”

Although Kenya finds itself in a vantage position among peers to benefit from the project that has forced Europe and the United States to review their economic and trade ties with Africa, it will also be the nexus of criminal networks.

The Belt and Road Initiative map demonstrates how Kenya, currently involved in a maritime border dispute with Somalia, is central to the Maritime Silk Road project. The project map touts Kenya as the link between Asia and Africa.

Since the Initiative has a heavy bias towards infrastructure, the fact that Kenya’s SGR construction is progressing steadily makes Kenya an indispensable hub along this modern Silk Road.

It is not just Kenya and East Africa that face the threat of Chinese encroachment. Other countries participating in the BRI, and especially those featuring developing and emerging economies, are also faced with a common dilemma linked to development projects.

“The likes of Myanmar, Vietnam, Mozambique and Tanzania, to mention only but a few, need to balance welcoming BRI investments to build infrastructure and increase prosperity with finding ways to shield themselves from the activities of criminals eager to exploit and infiltrate new infrastructural projects and put their hands on the extra cash injected into local economies,” explains Gi-TOC.

However, there is a caveat: the seemingly largest infrastructure project in modern history is a puzzle. International trade and development experts warn of “criminal involvement is a little studied aspect of the BRI, both in policy and research circles.”

They add, “This is problematic: failing to acknowledge that development and trade create vulnerabilities in contexts where governance and regulatory capacity is weak, crime levels are high and illicit markets are well established opens up the risk of systematic criminal exploitation.”

To help fill that gap, the GI-TOC says in its upcoming comprehensive report that there is a high possibility of a convergence between infrastructure and criminal currents. The report is titled China’s New Silk Road: A Superhighway for Illegal Trade?

GI-TOC says the upcoming report will demonstrate, among other things, “The first mapping of the convergence between BRI infrastructure and criminal flows – takes a close look at existing and potential criminal vulnerabilities in South East Asia as well as Central and Eastern Africa and identifies areas where BRI projects coincide with trafficking routes for narcotics, illicit environmental commodities and people.”

It says the report is accompanied by an extensive data annex and an interactive digital tool mapping the BRI’s criminal vulnerabilities and allowing users to visualise where and how specific infrastructural developments currently facilitate illicit trade or are likely to do so in the future.

One of the BRI’s key economic networks – the China-Indochina corridor – overlaps with both existing economic routes and established trafficking routes and transit hubs.

“The key paths of the BRI correspond to and elongate transnational trafficking routes, with illicit goods blending in with the larger volume of trade. In areas where the BRI routes do not overlap with established trafficking routes, new transport infrastructure will link the Chinese market with new trading partners, amplifying the opportunities for illicit trade,” the agency, which works with national governments investigative teams, says.

It adds, “On the African continent, the combination of railway developments and port expansions is opening access to trading markets for landlocked countries and inland cities, many of which are also rich in natural resources and serve as trade sites for illicit commodities.”

BRI projects appear to overlap with – and in some cases extend – existing trafficking routes in the eastern, southern and central regions.

The experts further question the capacity of developing countries like Kenya, Ethiopia, Tanzania and others targeted by the projects to detect and forestall trafficking in their resources. Already, China has set up shop in east Africa and has virtually infiltrated all government departments and agencies, which makes it difficult to detect crimes.

It says that when BRI corridors, routes and trade hubs are studied in parallel with illicit trafficking routes and hotspots, it is impossible to miss the overlaps and convergences.

“Places such as China’s Yunnan province and its capital city, Kunming; the special economic zone and port in Sihanoukville, Cambodia; and Kenya’s maritime and railway hub in Mombasa are among the recurrent locations that are both BRI nodes and magnets for trafficking of various types of illicit commodities, as well as for financial crime and other criminal activities,” it adds.

One of the New Silk Road’s objectives is to encourage stability through economic development – a target directly undermined by the emergence and expansion of illicit markets and economies. As BRI projects progress, the ever-evolving picture of criminal infiltration must be closely monitored.