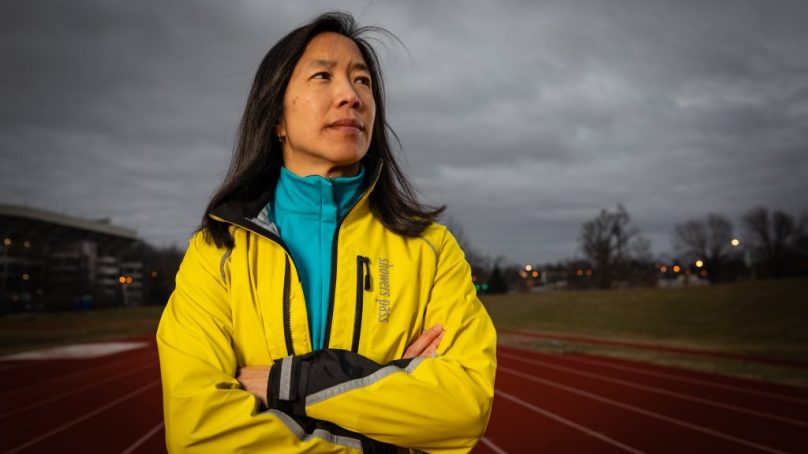 In 2011, the finding that the flu virus was where early textbooks said it should not be – hiding in the air, most often in particles small enough to stay aloft for hours, should have been major news. Instead, the major medical journals rejected her manuscript.

Even as Linsey Marr ran new experiments that added evidence to the idea that influenza was infecting people via aerosols, only one niche publisher, The Journal of the Royal Society Interface, was consistently receptive to her work.

Marr, an aerosol scientist at Virginia Tech and one of the few in the world who also studies infectious diseases, couldn’t help but feel a surge of excitement.

In the siloed world of academia, aerosols had always been the domain of engineers and physicists and pathogens purely a medical concern. Marr was one of the rare people who tried to straddle the divide. “I was definitely fringe,” she says.

Thinking it might help her overcome this resistance, she would try from time to time to figure out where the flawed five-micron figure had come from. But she always got stuck. The medical textbooks simply stated it as fact, without a citation, as if it were pulled from the air itself.

Eventually Marr got tired of trying, her research and life moved on and the five-micron mystery faded into the background. Until, that is, December 2019, when a paper crossed her desk from the lab of Yuguo Li.

An indoor-air researcher at the University of Hong Kong, Li had made a name for himself during the first SARS outbreak, in 2003. His investigation of an outbreak at the Amoy Gardens apartment complex provided the strongest evidence that a coronavirus could be airborne. But in the intervening decades, he’d also struggled to convince the public health community that their risk calculus was off.

Eventually, he decided to work out the math. Li’s elegant simulations showed that when a person coughed or sneezed, the heavy droplets were too few and the targets – an open mouth, nostrils, eyes – too small to account for much infection. Li’s team had concluded, therefore, that the public health establishment had it backward and that most colds, flu and other respiratory illnesses must spread through aerosols instead.

Their findings, they argued, exposed the fallacy of the five-micron boundary. And they’d gone a step further, tracing the number back to a decades-old document the CDC had published for hospitals.

A journal had asked her to review Li’s paper and she didn’t mask her feelings as she sketched out her reply. On January 22, 2020, she wrote, “This work is hugely important in challenging the existing dogma about how infectious disease is transmitted in droplets and aerosols.”

Even as she composed her note, the implications of Li’s work were far from theoretical. Hours later, Chinese government officials cut off any travel in and out of the city of Wuhan, in a desperate attempt to contain an as-yet-unnamed respiratory disease burning through the 11-million-person megalopolis. As the pandemic shut down country after country, WHO and the CDC told people to wash their hands, scrub surfaces and maintain social distance.

They didn’t say anything about masks or the dangers of being indoors.

A few days after the April Zoom meeting with the WHO, Marr got an email from another aerosol scientist who had been on the call, an atmospheric chemist at the University of Colorado Boulder named Jose-Luis Jimenez. He’d become fixated on WHO recommendation that people stay three to six feet apart from one another. As far as he could tell, that social distancing guideline seemed to be based on a few studies from the 1930s and ’40s. But the authors of those experiments actually argued for the possibility of airborne transmission, which by definition would involve distances over six feet. None of it seemed to add up.

Scientists use a rotating drum to aerosolise viruses and study how well they survive under different conditions.

Marr told him about her concerns with the five-micron boundary and suggested that their two issues might be linked. If the six-foot guideline was built off of an incorrect definition of droplets, the five-micron error wasn’t just some arcane detail. It seemed to sit at the heart of the WHO’s and the CDC’s flawed guidance.

Finding its origin suddenly became a priority. But to hunt it down, Marr, Jimenez and their collaborators needed help. They needed a historian.

Luckily, Marr knew one, a Virginia Tech scholar named Tom Ewing who specialised in the history of tuberculosis and influenza. They talked. Ewing suggested they bring on board a graduate student he happened to know who was good at this particular form of forensics. The team agreed.

“This will be very interesting,” Marr wrote in an email to Jimenez on April 13. “I think we’re going to find a house of cards.”

The graduate student in question was Katie Randall. Covid had just dealt her dissertation a big blow – she could no longer conduct in-person research, so she’d promised her adviser she would devote the spring to sorting out her dissertation and nothing else.

But then an email from Ewing arrived in her inbox describing Marr’s quest and the clues her team had so far unearthed, which were “layered like an archaeology site, with shards that might make up a pot,” he wrote. That did it. She was in.

Randall had studied citation tracking, a type of scholastic detective work where the clues aren’t blood sprays and stray fibres but buried references to long-ago studies, reports and other records. She started digging where Li and the others had left off – with various WHO and CDC papers. But she didn’t find any more clues than they had. Dead end.

She tried another tack. Everyone agreed that tuberculosis was airborne. So, she plugged “five-microns” and “tuberculosis” into a search of the CDC’s archives. She scrolled and scrolled until she reached the earliest document on tuberculosis prevention that mentioned aerosol size. It cited an out-of-print book written by a Harvard engineer named William Firth Wells. Published in 1955, it was called Airborne Contagion and Air Hygiene. A lead!