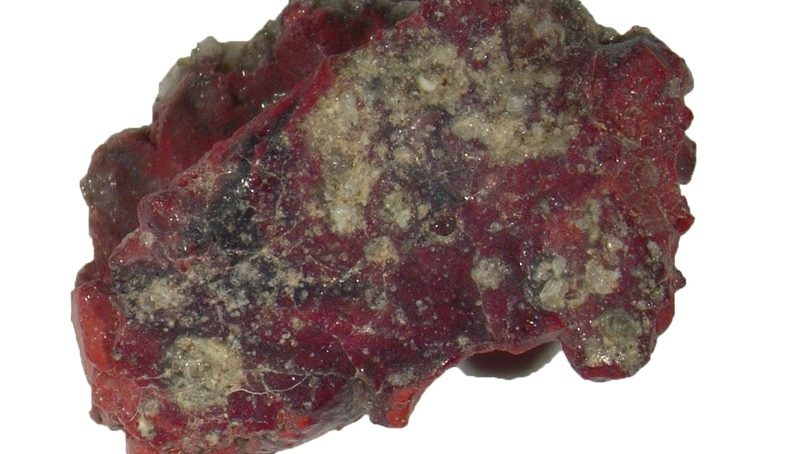 Scientists searching for quasicrystals – so-called ‘impossible’ materials with unusual, non-repeating structures – have identified one in remnants of the world’s first nuclear bomb test.

The previously unknown structure, made of iron, silicon, copper and calcium, probably formed from the fusion of vaporized desert sand and copper cables. Similar materials have been synthesised in the laboratory and identified in meteorites, but this one, described in Proceedings of the National Academy of Sciences on May 17, is the first example of a quasicrystal with this combination of elements.

Quasicrystals contain building blocks made up of arrangements of atoms that – unlike those in ordinary crystals – do not repeat in a regular, brickwork-like pattern. Whereas ordinary crystal structures look identical after being translated (shifted along certain directions), quasicrystals have symmetries that were once considered impossible: for example, some have pentagonal symmetry, and so look the same if rotated by one-fifth of a full twist.

Materials scientist Daniel Shechtman, now at the Technion Israel Institute of Technology in Haifa, first discovered such an impossible symmetry in a synthetic alloy in 1982. It had pentagonal symmetry when rotated in each of various possible directions, something that would occur if its building blocks were icosahedral – that is, had a regular shape with 20 faces.

Many researchers initially questioned Shechtman’s findings, because it is mathematically impossible to fill space using only icosahedrons. Shechtman ultimately won the 2011 Nobel Prize in Chemistry for the discovery.

At around the same time, Paul Steinhardt, a theoretical physicist now at Princeton University in New Jersey, and his collaborators had begun to theorize the possible existence of non-repeating 3D structures. These had the same symmetry as an icosahedron, but were assembled from building blocks of several different types, which never repeated in the same pattern – thus explaining why the mathematics of symmetrical crystals had missed them.

Mathematical physicist Roger Penrose, now at the University of Oxford, UK, and other researchers had previously discovered analogous patterns in two dimensions, which are called Penrose tilings.

Steinhardt recalls the moment in 1982 when he first saw the experimental data from Shechtman’s discovery and compared it with his theoretical predictions. “I stood up from my desk and went and looked at our pattern, and you couldn’t tell the difference,” he says. “So that was kind of an amazing moment.”

In subsequent years, materials scientists synthesised many types of quasicrystal, expanding the range of possible forbidden symmetries. And Steinhardt and his colleagues later found the first naturally occurring ‘icosahedrite’ in fragments from a meteorite recovered in Eastern Siberia, Russia. This quasicrystal probably formed in a collision between two asteroids in the early Solar System, Steinhardt says. Some of the lab-made quasicrystals were also produced by smashing materials together at high speed, so Steinhardt and his team wondered whether the shockwaves from nuclear explosions might form quasicrystals, too.

In the aftermath of the Trinity test – the first ever detonation of a nuclear bomb, which took place on July 16, 1945 at New Mexico’s Alamogordo Bombing Range – researchers found a vast field of greenish glassy material that had formed from the liquefaction of desert sand. They dubbed this trinitite.

The plutonium bomb had been detonated on top of a 30-metre-high tower, which was laden with sensors and their cables. As a result, some of the trinitite that formed had reddish inclusions, says Steinhardt. “It was a fusion of natural material with copper from the transmission lines.”

Quasicrystals often form from elements that would not normally combine, so Steinhardt and his colleagues thought samples of the red trinitite would be a good place to look for quasicrystals.

“Over the course of 10 months, we were slicing and dicing, looking at all sorts of minerals,” Steinhardt says. “Finally, we found a tiny grain.” The quasicrystal has the same kind of icosahedral symmetry as the one in Shechtman’s original discovery.

“The dominance of silicon in its structure is quite distinct,” says Valeria Molinero, a theoretical chemist at the University of Utah in Salt Lake City. “However, after many quasicrystals have been synthesized in the lab,” she says, “what I find truly intriguing is that they are so scarce in nature.”

Steinhardt says this might be because the formation of quasicrystals involves “unusual combinations of elements and unusual arrangements.”

Like most known quasicrystals, the trinitite structure seems to be an alloy – a metal-like material made up of positive ions in a sea of electrons. This is unusual for silicon, which typically occurs in rock in an oxidized form: reversing the oxidation would require extreme conditions, such as the intense heat and pressure of a shockwave, says Lincoln Hollister, a geoscientist at Princeton.

Steinhardt suggests that quasicrystals could be used for a kind of nuclear forensic science, because they might reveal sites where a covert nuclear test has occurred. Quasicrystals might also form in other materials that were generated in violent conditions, such as fulgurite, the material made when lightning strikes rock, sand or other sediments. “The quasicrystal saga will continue!” says Hollist.