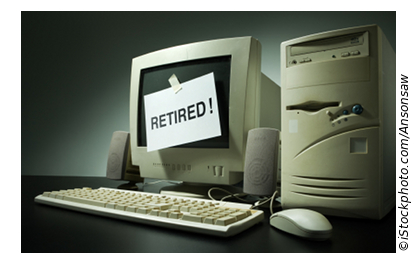 Sometimes cool old-school IT refuses to die, in demand and impractical to retire

Some 22,000 miles above Earth’s surface, NASA’s Solar Dynamics Observatory – a solar-monitoring satellite launched in 2010 – bristles with high-tech sensors. Yet one of the Earth-bound systems that supports those sensors was, until 2015, decidedly old-school.

“The Hollywood depiction of cutting-edge science is always super fancy,” says James Mason, now a solar physicist at the University of Colorado Boulder, whose team built one of the Solar Dynamics Observatory instruments.

But the first time Mason visited the White Sands Test Facility, a laboratory in New Mexico that launches rockets to calibrate his team’s instrument, he was shocked to find data streaming to a boxy, custom-built 1980s-era desktop computer, spitting out lines of pixelated, greenish-yellow text. “It’s so old I can’t find any information about it on the Internet,” Mason says.

His experience is not unusual. Antiquated computers are common in science, from geochemistry and linguistics to biochemistry and microscopy. Often an old computer is hooked up to an expensive piece of scientific kit – a microscope or chromatography system, for instance – with software that is incompatible with newer computers or too expensive to upgrade.

Sometimes the old computer just refuses to die or is so in demand that it’s impractical to decommission it for long enough to upgrade it. “Some of the equipment I use is older than I am,” says Kristin Low, a biochemist and entomologist in her mid-30s at Agriculture and Agri-Food Canada, based in Lethbridge, Alberta.

As the saying goes, ‘If it ain’t broke, don’t fix it.’ Whatever the reason, for many scientists, keeping their old computers ticking over is of paramount concern – and a labour of love.

At the Bodega Marine Laboratory at the University of California, Davis, some computers still run-on Microsoft Windows XP (released in 2001), because of the need to maintain compatibility with a scanning laser confocal microscope and other imaging equipment, says lab director Gary Cherr.

To work with current Windows versions, the team would have to replace the whole microscope. The marginal potential gains aren’t yet worth the $400,000 expense, Cherr reasons.

Sometimes it’s the software upgrade itself that’s too expensive. In 2008, Low’s undergraduate lab at McGill University in Montreal used an Intel 386-based system running Microsoft’s then-16-year-old Windows 3.1 software to connect to their liquid chromatography system. Updating the chromatography software to support an upgraded operating system would have cost $10,000, Low says — a prohibitive amount.

As with many labs, Low’s also stuck with old computers because the team didn’t want to mess with what worked. The chromatography system “was what everybody used for protein purification. It was used all day, every day”, she says. Bjoern Brembs, a neuroscientist at the University of Regensburg in Germany, used an Intel 486-based system as recently as 2020.

“It’s been running nearly every day since 1994,” he says, to connect to a home-built fruit-fly flight simulator. “When you’re an early PI, a postdoc, you really need this thing to churn out data, you don’t have time to upgrade it.”

Some labs use old computers to meet technical requirements. Newcastle University, UK, hosts a custom computer which runs Microsoft’s 12-year-old Windows 7 operating system for ultrasound imaging of human tongues, says Lauren Ackerman, the linguist who manages the laboratory. The computer’s primary requirement is storage: the computer needs to retain, for each hour-long session, vast quantities of image, audio and video data; linguists use these to study how different tongue shapes produce different sounds.

The computer also requires a specific type of expansion slot for communicating with the imaging hardware, and must be able to capture audio, visual, nasal-airflow and electric signals from throat electrodes, which measure whether the vocal cords are open.

A new computer that meets those requirements would cost thousands of pounds, Ackerman estimates. And it still wouldn’t work with the old equipment, which her team want to use for teaching purposes.

For Brembs, older PCs offer another crucial feature that was lost when Microsoft replaced its text-based operating system, MS-DOS, with Windows. MS-DOS “handles data as they come in with no buffering delays”, says Brembs, who exploits this feature for his fruit-fly flight simulator.

“In Windows, so many things are constantly happening in the background,” Brembs says. You might want to take measurements at intervals of precisely 50 milliseconds, but the operating system might be able to manage only an average of 50 ms, with intervals ranging from 20 to 80 ms, depending on what else it has to do. “For flies,” says Brembs, “such massive delays are perceivable.”

In an age when computers are replaced every couple of years, a decades-old system might seem shocking. But old computers can be surprisingly durable. Brembs’s never broke in the 26 years he used it, he says. The machine that Mason used during his NASA rocket launches lasted for more than 30 years, until 2015, he says. It was incredibly simple to operate and couldn’t have connected to the Internet even had they wanted it to.

Eventually, the computer’s flat, rainbow-coloured ribbon cable, which on modern computers has been supplanted by more robust tubular cables, started fraying from repeated plugging and unplugging. They replaced the machine before it broke down.

Karin Forney, a marine ecologist at the US National Oceanic and Atmospheric Administration’s Southwest Fisheries Science Center, based in Moss Landing, California, has been using a Toshiba T1000 laptop since 1987 to record data in the field. Her research involves going up in a tiny plane “the size of a Mini Cooper with wings” to survey harbour porpoises and leatherback sea turtles.

“On a daily basis we would do three of the four of the things you’re not supposed to do to a computer,” she says: subjecting it to humidity, sea air and temperature extremes.

Forney has tried more-modern laptops, even those that are “supposed to be indestructible”. “They were toast in two weeks,” she says. The Toshiba, on the other hand, is perfectly suited to field conditions: it’s small enough to use in the cramped cockpit, where Forney sits next to the pilot, but must keep clear of the flight controls; its LCD screen is readable in bright sunlight; it stays cool enough not to burn her lap; and it rarely crashes. It is, Forney concludes, “really robust”.

With no internal hard disk, Forney writes her data to the laptop’s RAM card, which she says is an advantage: the vibrations and heat of the tiny airplane are tough on hard drives. Then she transfers the data to a more modern computer using 3.5-inch floppy disks. External floppy-disk readers are widely available and cost about $20.

As a general rule, computers running outdated software should not be connected to the Internet because any software that’s no longer updated is vulnerable to malware and newly discovered bugs. Many institutions, such as Ackerman’s, have IT policies about this. “You do not want a bug,” she says.

Bugs aside, nothing lasts forever. When vintage PCs break, researchers need to get resourceful, creative and lucky.

Forney at one time had a stack of 10 of her 1987 Toshiba laptops that she’d bought on eBay for $10 to $12 each. “We’re down to our last one,” she says. She estimates that half of them had working parts when she bought them, which she’s used to replace broken keyboards, batteries, screens and floppy drives.

“I call them Fisher Price computers because I’ve opened them and swapped out parts. There’s literally five parts in there.” The fatal blow would be a broken power supply, because that is soldered to the motherboard and can’t be replaced.

When the capture board for Cherr’s confocal microscope died four years ago, he called the manufacturer, Olympus, to try to buy a new one. Staff there said a new board wasn’t compatible with the old microscope, but they miraculously found an old board and sent it for free. “We understand that we’re kind of living on borrowed time,” says Cherr. “If that board dies, we’ll have to go onto eBay” — or replace the microscope.