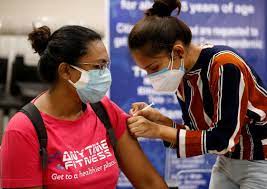 Onerous online procedures have turned vaccine access into an exclusionary, often lottery-like process in a country where about half the population lacks internet access.

When India opened up vaccines to all adults on May 1, those in the 18 to 44 age group had to register through the Cowin platform – a centralised system – before they could book an appointment. For this, they need identity documents and access to a smartphone or computer with a strong internet connection. As states grapple with vaccine shortages, the online system has privileged a small fraction of elite, tech-literate city dwellers.

“The government has never looked out for people like us and now is no different,” said Sarfaraz Ahmed, a driver in Mumbai.

Although he lives on a footpath just steps away from a club being used as a vaccine centre, he didn’t know the temporary clinic even existed. “We want to get vaccinated, but we have no idea how to go about it. No one has reached out to us,” said Ahmed, who owns a mobile phone, though not a smartphone.

This week, India’s health ministry announced that states can offer on-site registration in government-run clinics for all adults, acknowledging that people without internet or smartphones had “limited access for vaccinations”. But activists say more must be done to ensure doses are available to all.

India’s second-wave surge is setting global records for new daily infections and death tolls, while exposing long-standing inequalities between cities and rural centres, and across class and caste lines.

Healthcare and vaccine shortages have hit everyone. But internet access has proven to be a lifeline for some and a barrier for others – from getting vaccines or emergency help, to a wide information gap. As the virus overwhelmed hospitals in urban centres like Bangalore and Delhi in April and May, tech-savvy urban users leveraged social media to find leads for beds, oxygen, and medicine.

“We want to get vaccinated, but we have no idea how to go about it.”

India’s second wave is starting to stabilise in cities like Delhi, but activists fear the divides could grow even more acute as the pandemic swells in rural areas – where health systems and resources are more fragile, and internet connectivity more sporadic.

Reports from states like Bihar, Jharkhand, Gujarat and Uttar Pradesh are grim. Bodies have been washing up in the Ganges, crematoria are overflowing and graveyards are packed to capacity. “The situation is very bad. The entire village is suffering from Coovid-like symptoms,” said Nizamuddin Khan, a physiotherapist and resident of a village in Uttar Pradesh.

In Mumbai, vaccine availability announcements were made on Twitter – a platform used by only a fraction of India’s population. Available slots are often snatched up within seconds.

Language is another barrier. So far, the Cowin app has only been available in English, spoken by about 10 per cent of the country.

“How do I know where to check or what to do? I am not that educated,” Shivcharan Yadav, a migrant worker in Mumbai, said in Hindi.

Activists, researchers and civil society groups have condemned what they see as needless and discriminatory policies that are widening the gap in access to vaccines. They’re demanding that mandatory steps like proof of identity also be removed.

“People are forgetting a basic fact that vaccination is to be carried out by healthcare workers, not by IT engineers. It is a highly logistics-driven process,” said Srinivas Kodali, a researcher with the Free Software Movement of India. “Tech utopian ideas don’t factor realities on the ground.”

The urban poor like Ahmed and Yadav, who number more than 80 million, have been particularly hit.

“Even the few that have smartphones aren’t able to manage,” said Subodh Bind, a street seller in Delhi. “If the government reaches people through local leaders or elected officials, that would instil confidence and awareness in people.”

He said he has seen many people struggle: “Rich people may be able to manage, but what about us?”

India has about 749 million internet subscribers in a population of about 1.3 billion people, according to the government’s telecoms regulator, although a 2019 survey suggested only 36 per cent of the population had access. Mobile plans are cheap and connectivity is constantly growing, but large parts of India are still offline.

“Forget 4G. You don’t even get 2G internet in some areas; you can’t even make calls,” said Dr Sarika Kulkarni, founder of the Mumbai-based Raah Foundation, which works with Indigenous communities in remote parts of Palghar district, north of the city.

The foundation is urging local authorities to take the healthcare registration process offline, or “the bulk of this population will not be vaccinated”, she said.

Vaccine shortages have compounded problems. India is the world’s leading vaccine manufacturer, but it blocked exports in March as its second wave began.

As of May  23, roughly 11 per cent of Indians had received at least one dose, while the fully vaccinated population was just three per cent. India is averaging about two million daily doses; at this rate, it would take more than two years to fully vaccinate three quarters of the country.

With vaccines limited and access dependent on the app, coders and the tech-savvy have created workarounds – social messaging groups and other hacks – to track when slots open.

“It’s luck and immense technical skill that gets you a slot today,” said Karan Rajpal, a Delhi-based digital marketing professional who has been helping people in his circle in Bihar and Uttar Pradesh states. “Despite all the wherewithal I have, it is like a daily roulette.”

The faster your internet, the better your chances. In remote Leh, on India’s northern border, where the network is patchy, those with better connectivity succeed, said Konchok Stanzin, a district-level official. In rural Thane, a few hours’ drive outside Mumbai, out-of-town city dwellers scooped up most of the available slots as vaccines became available for 18- to 44-year-olds.

“The internet here is slow and within two or three minutes of opening, the slots would get booked with city folks coming here,” said Subhash Pawar, head of the local governing body. “But after the first few days, [their numbers] came down.”

“It’s luck and immense technical skill that gets you a slot today. Despite all the wherewithal I have, it is like a daily roulette.”