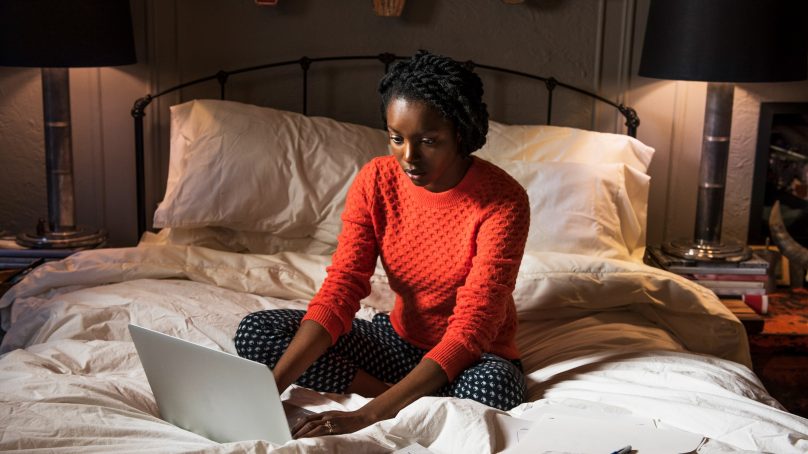 The coronavirus pandemic has changed the way we work and remote work will continue for the foreseeable future, according to media research. Forbes magazine predicts that by 2025, an estimated 70 per cent of the workforce will be toiling at home at least part-time.

You’d think after 15 months of being completely digital, it would get easier and not more complicated. Yet while I’m lucky to keep my dual jobs as an author and teacher, I’ve often been caught by surprise by the programmes and platforms that have emerged during the pandemic.

One recent Saturday morning, I woke up early, showered, blow-dried my hair, applied makeup, put on a dress and met my husband – wearing his nicest Armani jacket – at the laptop on my desk in New York. I called my mom in Florida, who’d been the only one at her beauty shop at 8 am. We were excited to see everyone at a Michigan family friend’s online bar mitzvah.

While a tad technophobic, this was not our first remote religious rodeo. I’d Zoomed in for a Christian memorial service for a former teacher. And my husband had been to another web-based Jewish rite of passage for a co-worker’s son at a different congregation.

There he saluted the host and joked with his cohort before the camera cut away to the boy reading from the Torah.

This time we weren’t emailed a Zoom link in advance. I texted my friend Lisa, the boy’s mom, to ask why. “Go to the website on the invitation,” she said. There we scrolled to find a video of the service being livestreamed. Aha! So, we wouldn’t be seen on camera at all. I changed back into sweats to watch the bar mitzvah boy do his haftarah, embarrassed I’d wasted an hour dolling up for nothing.

Weeks before, asked to give a talk at a virtual conference, I assumed we’d use Zoom. But soon I was staring at my own image and talking into a webcam for my “Intrado session.” When it wouldn’t function, I was told to switch my browser from Safari to Chrome at the last minute because they’d “detected a pop-up blocker and contact controls that had to be disabled.”

That done, the only way I knew 44 participants were watching was by the questions they asked in the chat. While much of life will remain online, each person, platform and occasion, has a method with its own rules and techniques that are constantly revised and updated. Here’s how I’m avoiding being taken aback, confused or disappointed again.

For any web invitation or virtual appearance, get the details upfront before committing: Will it be recorded? Is it audio and video? In what format? To what end? This is more complex than it sounds and it’s important to get answers, especially if it’s a professional appearance.

When my funny former student Elisa asked me to be a guest on her variety show, I thought we’d be Skyping or Zooming, as I’d done for other talks and lectures. There I was used to pressing a filter and sitting farther back from my laptop to avoid an unflattering middle-aged mug shot.

Yet when Elisa sent me the recording, I hated how I looked closer up and filterless. I found out her YouTube comedy hour was on Streamyard, “a live streaming studio” that allowed the host – and not the guest – to add filters and I looked horrible. I’m now only saying yes to being recorded over Zoom, Skype, or Google Hangouts, which allow me to filter first.

After asking the Strand Bookstore the specifics of how a literary panel I was hosting would be handled, I learned that only the panellists would be seen online. That depressed me, since the occasion was a big book launch on my birthday where I’d hoped to greet friends showing up from all over the country.

While the bookstore’s Zoom package was just set up for webinars like this, the kind person in charge compromised, suggesting an after-party Zoom for a Q&A with a new link, where I was happy seeing 100 familiar faces and hearing their voices. For a wonderful Shakespeare and Co event, we found a way to greet everyone Zooming in, followed by “spotlighting” only the panellists once we began.

When I was taped moderating an in-person publishing talk for a media group, I didn’t sign a release form and had no idea that my Vimeo way-too-close-ups would pop up on Twitter forever. Checking back, I found an Eventbrite email confirmation with the fine print: “This event will be recorded. By entering the event premises, you consent to be photographed, filmed and/or otherwise recorded.”

Had I realised the group owned the recordings and that they would repost clips and highlights from them forever, I might not have done it. A colleague said her church had taken to livestreaming services with the same caveat.

Make sure you find out in advance when and how your images will be shown publicly, even if you think you’re only attending one event. That panel, ceremony or reading could be repromoted in the future, with your images or video used for other purposes later down the road. This will give you the chance to opt out, or at least, to dress nicer and wash your hair.

A well-known Australian podcaster saw my substance abuse recovery posts on Instagram and asked if he could interview me. Flattered, I said sure, assuming that because it was a podcast, they’d just be recording my voice. Yet the host expected to videotape me too. Not wanting someone else to control even more visual content of me after previous bad experiences, I said, “I’d prefer just doing audio.” They said “no problem” and it wasn’t. You don’t get what you don’t ask for.

When I was thrilled to be on author Laura Zam’s vlog Sexual Healing, posted on Youtube and distributed by Pandora, I asked if I could approve the clips of myself before they were posted on Facebook, Twitter and Instagram. She agreed, which made me feel more comfortable doing the interview.

Risks of remote presence: Your online content can be screenshot, misused