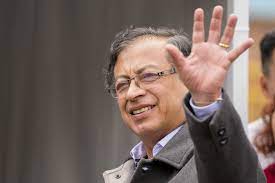 Helmut Ángulo lost his parents in 2000 at the height of the Colombian civil war, kidnapped and killed by rebel fighters. When the country signed a peace deal 16 years later, Ángulo vigorously opposed it. He wanted justice for his parents’ deaths, and he wanted to find their remains so he could give them a proper funeral.

“When I went to try and find the bodies,” he said, “the prosecutor’s office said they couldn’t help me. They wouldn’t even enter the region where it happened because it was so dangerous.”

That was when Ángulo asked ex-rebel fighters themselves for help. “At first, I hated them. I was just in so much pain,” he said. “But after some cruel insults on my part – I think I even threatened them – I noticed they were still listening. They really wanted to help me if they could.”

“‘The war was over,’ I realised. It was time to think of the future rather than the past. And really, now, five years later, when I think back on that day, I think we were all victims [of the war] – not just my parents, not just me, but also the rebels, and really all of Colombia. I strongly support the peace accord now, even if it often seems the government doesn’t.”

On June 19, Colombians went to the polls to elect a new president in a country whose politics remain overshadowed and polarised by efforts to bring a peaceful resolution to its 50-year civil war – for decades the world’s longest-running conflict.

For the first time in its history, Colombian voters elected a leftist president, Gustavo Petro, a former-guerrilla-turned-mayor of Bogota and then a senator.

Petro defeated right-wing populist Rodolfo Hernandez, a right-of-centre political establishment that has long run Colombia, and it could usher in a dramatic change in the US relationship with its closest regional partner.

The choice is stark and the stakes were high as Petro, a left-wing senator and ex-guerrilla took on Hernández, a construction magnate fighting a social media-driven campaign centred on anti-corruption despite facing his own graft investigation.

A year after at least 60 people were killed when police forces cracked down on protesters, the victor must decide how to tackle a cycle of violence and popular anger that has raged with varying levels of intensity since landmark peace accords officially ended the war in 2016.

Camilo González Posso, director of peace monitoring group Indepaz, explained why the election is seen as so pivotal.

“In Colombia, we have seen an explosion in violence in recent years,” he told The New Humanitarian, referring not only to the rising power of criminal groups since the 2016 peace accords, but also to social violence, including 2021’s brutally suppressed street protests.

“At the same time, peace has presented Colombia with a great opportunity. Alongside the humanitarian crisis, we also have a huge explosion of social movements with democratic aspirations. There is a revolution of awareness happening in Colombia.”

But the winner of Sunday’s second round run-off election will inherit a country riven by renewed conflict, economically battered by the Covid-19 pandemic, and struggling to cope with the many humanitarian challenges the health crisis has exacerbated.

“To understand Colombia, you have to understand the civil war,” said Darwin Molina, a political organiser and activist in the port city of Buenaventura who tries to help local citizens from poor neighbourhoods get elected to political office. “It all ties back to that.”

In 2016, then-president Juan Manuel Santos pushed through a controversial agreement with the Revolutionary Armed Forces of Colombia (FARC), officially ending the war. Fighters from the leftist guerrilla group agreed to lay down weapons and rejoin civil society, while the government committed to offer them protection and invest in infrastructure, economic opportunities and education in regions long neglected, including areas around Buenaventura where recent fighting between rival groups has forced tens of thousands to flee.

Violence initially subsided. But two years later, after campaigning to “modify” the peace deal, the new administration of Iván Duque imposed significant delays on its implementation and stonewalled on earlier promises, particularly investment in conflict areas.

When new armed groups or splinter groups moved into the vacuum left vacant by FARC, armed conflict resumed. The government has preferred military solutions to social strategies. As a result, many communities that were flashpoints during the civil war now feel abandoned.

Already facing historically low approval ratings, Duque’s Centro Democrático party was severely punished in March legislative elections. Term limits prevented Duque from running for a second term, and Centro Democrático chose not to present a candidate in 2022. Instead, it informally endorsed the coalition of former Medellín mayor Federico Gutiérrez, who was surprisingly eliminated in the first round of voting on May 29.