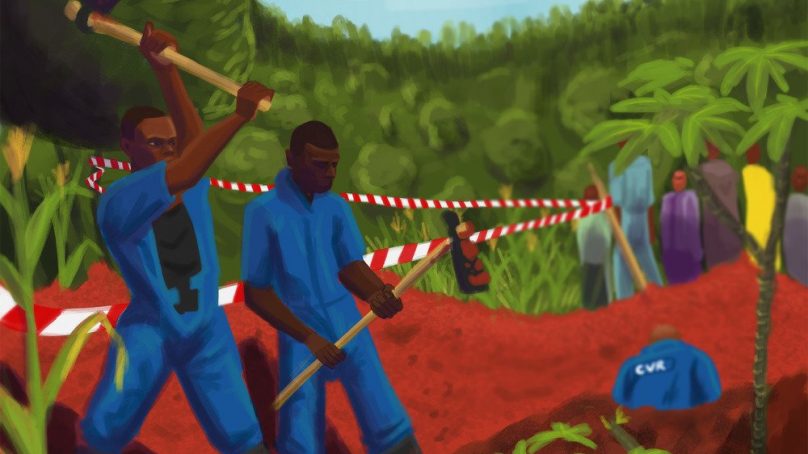 In September 2020, I met Jean Marie, a young man who was patiently exhuming a grave in southern Burundi’s Makamba province, where I was born. He told me the events of 1972 had trapped his family in decades of hardship.

His grandfather – the main breadwinner – was killed during the massacres, and his father was able to escape abroad to a refugee camp. The family returned to Burundi years later, too impoverished to put Jean Marie through school.

Joining the commission was no accidental job for the young man: He said he was actively searching for his grandfather, who wore a red coat on the day he disappeared, according to witnesses.

Shovel in hand, Jean Marie’s heart would skip a beat every time a dash of red appeared in the dirt. “Here, I am not looking for money,” he told me. “I just want to be the first to see my grandfather’s remains.”

Ethnic violence never used to be a problem in Burundi. Our rulers were once kings and princes who belonged to a separate royal group known as the Baganwa. Differences in class were less about Hutus and Tutsis – who share the same language and customs – than about the Baganwa and their subjects.

While the two groups had some differences, ethnic identity did not determine social and economic rank. The king’s advisors – the abanyarurimbi – drew from both communities. Hutus, meanwhile, could become Tutsi, and some people even identified as both.

As we broke away from Belgium in 1962, the main power struggles involved rival branches of the royal class – the Bezi and Batare factions – rather than Hutus and Tutsis.

How, then, did centuries of cohesion aided by allegiance to a shared monarchy suddenly dissolve into widespread ethnic violence – a puzzle Lemarchand, a schilar, calls “the Burundi paradox”?

The answer is contested. Although scholars have written books on 1972, Burundians have long seen the history as incomplete, and the commission is now challenging some of the narratives that have emerged.

Still, some factors clearly played a role. A Hutu revolution in Rwanda – beginning in 1959 – against the Tutsi-led monarchy saw hundreds of thousands of Tutsis flee to Burundi, straining relations between the groups. The abolition of our monarchy in 1966, meanwhile, removed a stabilising force and crucial buffer against ethnic strife.

The faultlines hardened after the 1972 genocide. And when Tutsi radicals assassinated our first democratically elected president – a Hutu – in 1993, a civil war broke out between Hutu rebels and the Tutsi-dominated army. By 2005, another 300,000 lives were estimated to have been lost and 1.2 million Burundians displaced.

While everyone has suffered during these cycles of violence, civil society groups have accused the commission of bias for allegedly focusing its investigations on the events of 1972, and on the Hutu rather than the Tutsi victims of those killings.

Opposition activists have linked the focus to last year’s elections, claiming the ruling CNDD-FDD party – a former Hutu rebel group that took up arms in the 1990s – was trying to drum up support among the Hutu electorate.

Others suggest the CNDD-FDD has more personal motivations: closure for relatives and friends that party members lost in 1972, and avoiding tough questions that would arise should crimes the ex-rebels committed be investigated too.

The president of the commission, Pierre Claver Ndayicariye, denied any bias when I interviewed him in March 2020. He said the commission had opened various mass graves from the 1990s, and that all atrocities would be investigated in due course.

Asked why the majority of exhumations to date have involved graves from 1972, Ndayicariye told me that witnesses and perpetrators from the war won’t be alive much longer. Families of the missing, he added, have also waited the longest for answers.

On the ground, feelings of resentment against the commission were clear, however. In Makamba province, I met a Tutsi man who wouldn’t provide search teams with the location of a mass grave where his father was buried because he resented the agency.

Several Tutsi community members I spoke with said they also feared violence should their Hutu neighbours conclude they were to blame for what the commission was uncovering – findings that could be used to prosecute perpetrators should the government so decide.

The UN’s Independent Commission of Inquiry on Burundi agreed with that assessment. In March 2020, it warned against “the risk of reviving past antagonisms, including the desire for revenge”.

In asking communities to relive the past, the commission’s work has also shown how our memories differ. In Rumonge province – next to Makamba – Hutus I spoke with denied that members of their community had killed Tutsis in the revolt that preceded the 1972 genocide. Local Tutsis said the opposite.

And while Hutus almost universally see the events of 1972 as an indiscriminate extermination campaign, some Tutsis I spoke with viewed it as a legitimate response from a government trying to combat Hutu insurgents.

With the past contested and mythologised, there were times when I questioned how the commission could fulfil its mandate to separate fact from fiction, let alone help reconcile Burundians around the country.

But the commission’s work isn’t just fostering division: Over a year of reporting, I have seen many Hutus and Tutsis unite to give information on what happened in 1972, something that fills me with hope for the future.

The clearest example was in Bururi, a southern province where Hutu insurgents killed many Tutsis in 1972, and where the Tutsi officers behind the subsequent genocide – sometimes dubbed the “Bururi mafia” – were born.

Residents said rivers in parts of the province turned red as Hutu victims were tossed into the water. Commission workers told me 18,000 people likely died here, with many mass graves yet to be discovered.

While some Bururi locals refused to help the commission, one group of local Tutsis volunteered details that led to the discovery of a mass grave containing the bodies of 121 Hutu secondary school pupils – future elites in the eyes of their killers.

The commission was able to identify the names of the pupils – buried in the middle of a forest – using archived photos and files smuggled out of the school in 1972 by a Tutsi teacher who had defied official requests that they be destroyed.

Similar stories of solidarity emerged wherever I went. In another Bururi commune, I learned about a Tutsi teacher who had refused to hand over his Hutu students to the military, and who died alongside them as a result.