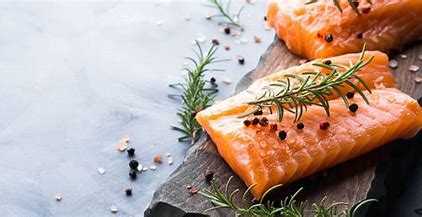 In recent weeks, companies developing cell-based fish and shellfish have been drawing attention as they tout their offerings and expand their businesses globally. San Diego-based BlueNalu will introduce lab-made finfish to Europe through a collaboration announced in September with British frozen food distributor Nomad Foods.

In June, Wildtype opened a tasting room adjacent to its San Francisco pilot plant, where it has been offering bites of lab-grown, sushi-grade salmon.

These moves reflect a growing interest in alternative, biotech-derived fish. The need for sustainability has brought them to the fore: Of all the seafood consumed in the world, about half is raised in aquaculture and the other half is wild caught.

Some species of wild-caught fish may contain mercury, microplastics and pollutants from environmental contamination; stocks are being depleted by the impact of climate change on ecosystems and overfishing. The harvest of wild-caught seafood cannot be increased sustainably, and yet the global population and its demand for protein continue to grow.

“So, we’ve got to come up with a lot of different ways to address these challenges,” says Kevan Main, associate vice president for research at Mote Marine Laboratory and Aquarium in Sarasota, Florida. “I believe that cell-based seafood is going to be one of those opportunities.”

Of the companies exhibiting various prototypes or scaling up production, BlueNalu is among the closest to market. In addition to its partnership with Nomad Foods, BlueNalu has partnered with Mitsubishi in Japan, seafood producer Thai Union in Thailand, and wellness food company Pulmuone in South Korea to develop market strategies in Asia for BlueNalu’s products.

Cell-based seafood – derived from commonly consumed fish (for example, salmon and tuna) or shellfish (for example, crustaceans such as shrimp and crab) – is also known as cultured, cellular or in-vitro seafood. It is derived from the tissue of an aquatic species, but has never been part of a live, swimming animal.

The flesh is made in the laboratory by harvesting cells from a small number of donor fish or shellfish and culturing them in a bioreactor. For three-dimensional tissues like fillets, an edible, biocompatible scaffold is needed to provide structure for cell growth and maturation.

The resulting lab-made meat, a mix of mostly muscle and fat cells, tastes similar to the live-caught version, but has none of the animal ‘waste’: no bones, no scales, no eyeballs.

The strategy has already been applied to and commercialised in the in vitro culture of other kinds of meat, including beef, chicken and pork. Indeed, dozens of companies are developing cell-based terrestrial meat and a few of them have racked up over a hundred million dollars each in venture capital. Chicken developed by Eat Just became the first cultured meat to reach the market when Singapore’s regulators in December 2020 approved its sale.

Singapore and other global regulators will likely supervise the in-vitro cultivation of fish using the same criteria and pathways they use for chicken and beef. The United States, however, makes a distinction. Both the US Department of Agriculture (USDA) and the Food and Drug Administration (FDA) oversee cultivated terrestrial meat, but for cultivated fish, the FDA will have sole jurisdiction. That rule applies to all seafood except catfish, as a result of some political history.

So far, cultured seafood has lagged its terrestrial counterparts. According to the Good Food Institute, which tracks and advocates for the cultured meat industry, there are only about 14 companies in the world developing this kind of seafood.

The gap is, some biologists contend, due to a research bias towards terrestrial species. “It’s amazing to me how far advanced the science is with land-based animals,” says Main at Mote. “I think it’s because it’s easier: they’re right beside you, you can access those resources, and you can see what’s going on really easily. Whereas with seafood, everything’s happening in the water, so you have to first understand how to make things work in that aquatic environment,” she says.

Research on terrestrial meat also benefits from a relatively narrow selection of species. “When we’re talking about chicken, we are talking about one type of product with a specific flavour,” says Reza Ovissipour, an assistant professor at Virginia Tech specialising in food safety and cellular agriculture. Each seafood species, however, has its own flavour, texture, and cell line that requires a unique set of parameters in which to grow.

And developing cell lines from these species can prove elusive. Scientists start by harvesting adult or embryonic stem cells from the species of interest. They then look for cell lines that are self-renewing, stable from generation to generation, and can differentiate into muscle, fat and connective tissue.

The goal is to establish an immortalized cell line that continually regenerates on its own, eliminating the need to go back to the donor species.