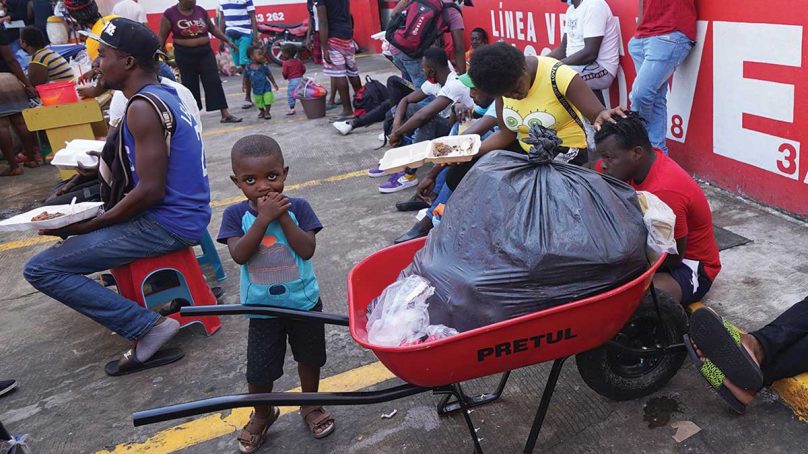 As their limited opportunities in Brazil and the discrimination against them in Mexico demonstrated, poor Black migrants like Julliana Essengue from Cameroon and Dalmacy from Haiti are at the bottom of a de facto migrant hierarchy. In their attempt to reach the United States, which is often still a safer haven than where the migrants came from – the couple would nonetheless be entering a country that has historically been hostile to Black migrants.

While the nation’s own history of slavery casts its shadow, the origins of the United States’ anti-Black immigration policies can also be traced to Dalmacy’s home country of Haiti – more specifically, to the US response to the Haitian Revolution of 1791-1804, when Haiti defeated the French to become the first free Black republic in the Americas.

Under President Thomas Jefferson (1801-1809), the government, fearing a similar slave revolt, refused to recognise Haiti, a position the US held until 1862. Jefferson also imposed a devastating embargo on the country from 1806 to 1808, which hindered Haiti’s ability to trade and pay its debts.

France recognised Haiti in 1825, but only on the condition that Haiti pay for the losses France suffered during the revolution.

Together, the United States and France all but ensured that Haiti would be impoverished for decades, if not centuries, to come. This contempt toward Haiti has characterised US-Haiti relations ever since. In 1915, the United States invaded Haiti and occupied the country until 1934. From 1957 to 1986, the US backed the autocratic regimes of François Duvalier and his son Jean-Claude. Between 1960 and 1988, about 125,000 Haitians fled the violence of the Duvaliers and the disintegration of the Haitian government for the US.

In contrast with how the United States treated refugees arriving from Cuba – such as offering them a straightforward path to permanent residency after a short period – Haitian asylum seekers were met with visa rejections, detention requiring a $500 bond for release, and mass work-authorisation denials. These harsh immigration policies became known as the Haitian Programme.

Two important cases, Haitian Refugee Center v. Civiletti (1980) and Jean v. Nelson (1985), overturned many of the discriminatory immigration practices against Haitians. But the victories were short-lived: Instead of criminalising only Haitians, the US government began to target all immigrants.

“The Reagan administration, after this ruling in Jean v. Nelson, says, ‘Well, then we’ll just expand it to everyone. There won’t be a Haitian detention programme; it’ll be an all-excludable-aliens detention programme,’” said historian Carl Lindskoog, the author of Detain and Punish: Haitian Refugees and the Rise of the World’s Largest Immigration Detention System.

“And so that’s a really tragic story about how successful legal resistance actually leads to a proliferation of this system of injustice.”

Up to 15,000 migrants, most of them black Haitians, assembled this past September under a bridge in Del Rio, Texas, after crossing into the country from Mexico. Photojournalists captured images of US Border Patrol officers chasing them on horseback. Guerline Jozef, the executive director of the Haitian Bridge Alliance, went to the border town to aid the migrants, and for her, the racialised experience of these migrants was obvious.

“As a Black woman, a Haitian American, I always think and I have asked the administration, ‘If the people who were under the bridge were coming from Norway, is this how they will have been treated?’” she told me in Del Rio, almost a week after the news broke.

By October 1, about 5,500 migrants in Del Rio were immediately deported to Haiti, while 8,000 fled back to Mexico. The rest were put in removal proceedings and sent to different cities, their fate eventually to be determined by an immigration judge.

One of those cities was El Paso, where I met with Jean-Jacob Jeudy, a retired Haitian American US Army captain and a pastor at Walk by Faith International Missionary Church.

Since 2016, Jeudy has been providing food and using the church to temporarily shelter Black migrants. Almost every inch of the space was filled with migrants – 84 in all, some of them children. He introduced me to two Haitian migrants: Dumas, 34, and Alfond, 29, whose last names are withheld here to protect their identity. Both still wore the navy-blue tops, masks, and ankle monitors mandated in immigration detention.

The two men had been in Chile for four years and two years, respectively, after leaving Haiti and had made the journey to the United States with their wives and children. They said their experience during and after Del Rio was traumatising.

“What has saddened me more in the prison, and which will never be removed from my mind, is that my child was still not doing well,” Alfond said, referring to his time in detention for three days after being processed in Del Rio.

“As the baby was crying, I asked for some milk for the baby. One of the officers threw the bottle away and told me that the baby was too old to continue drinking milk. That has saddened me a lot. That’s the biggest humiliation that I have ever had in my life.”

The men also said they had no way to wash themselves or brush their teeth during their detention and that their entire journey through the Americas had been filled with similar treatment. When I asked whether they regretted attempting to come to the United States, Dumas said with little apparent emotion, “We are more obliged to be humiliated in the United States than elsewhere.”

It was the same sentiment Essengue and Dalmacy felt when they left Tapachula in October 2020, after having spent nearly eight months there. Essengue said she finally obtained documentation that would allow her to travel within Mexico and eventually present herself for asylum at the US border. From Tapachula, she took a flight to Mexico City. Dalmacy came with her but was hesitant to go to the US before the election. He hoped that if Joe Biden won the presidency, he would make it easier to declare asylum.

They decided to separate: Dalmacy stayed in Mexico, giving Essengue his cousin’s contact information in Florida before they parted ways. Essengue took a bus to Ciudad Acuña, and with help from two Kenyan men, she crossed the Rio Grande.

After walking together for some time, they encountered US Border Patrol officers. “They asked us, ‘Where are you people going to?’” Essengue said. “We did not say anything. Then they took us to their camp.”

According to Essengue, the officers took her fingerprints and brought her and the men to a camp. They were given a Mylar blanket. Later, some officers took her to another camp, where she stayed for three days. Essengue said those 72 hours felt like two weeks, and she began to feel ill, even delusional: “You see only the light that is on the ceiling, but you don’t see the day.”

During her stay, she received some medical attention, and after being interviewed and exchanging documentation with the authorities, Essengue presented her asylum claim and was allowed into the US. At the border, she was met by members of an NGO, the name of which she doesn’t remember, although she recalled the name of the representative who aided her: Tiffany, who helped her travel by bus to the home of Dalmacy’s cousin in Florida.