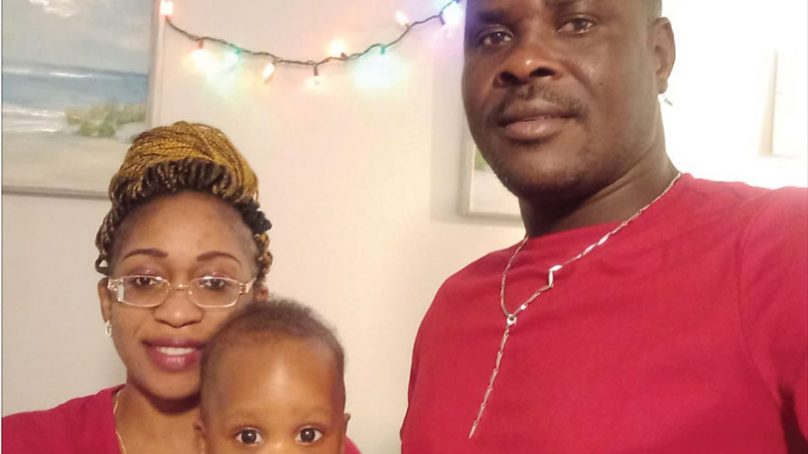 On October 30, 2020, Julliana Essengue, a Cameroonian woman on the run from persecution at home, left the Border Patrol station where she’d been held. But when she arrived in Bradenton, Florida, in November, Dalmacy’s cousin was unable to house her, although he did put her up in a hotel. Uncertain of what would come next, Essengue called Tiffany, who sought help from the Florida Council of Churches.

Trinity Lutheran Church, headed by the Rev Bobbie Blackburn, heeded the call. The church community rented an Airbnb for Essengue before putting her in a cost-free maternity housing facility called Solve.

“It wasn’t what I had hoped, you know,” Blackburn said. “I naively thought that it would be a warm, loving, Christian kind of supportive community. Not so much, but she – bless her heart – she made the best of it.”

Blackburn indicated that Essengue had faced racist treatment from some of the women at Solve. The church provided her with material and legal support, but her future remained uncertain. Her asylum case would not be decided for some time, and she would need to find housing, earn a living, and provide for her future baby.

In January 2021, Essengue gave birth to a son, Jamerson. She calls him a “miracle baby,” because of everything she went through while she was pregnant.

Meanwhile, in Mexico, although the US election had gone the way Dalmacy hoped, he was still hesitant to apply for asylum. After Essengue gave birth, however, he attempted to cross. And in February, he was picked up by the Border Patrol.

“As soon as I entered the border, I did ask for asylum,” Dalmacy said. “They did not give me the opportunity.”

If this was as clear-cut as Dalmacy explained it, then the authorities violated refugee law. Dalmacy spent almost a month in detention, before being deported back to Haiti.

But in early August, when Essengue and I made plans to finally meet in person after months of exchanges, she surprised me with some good news: Dalmacy was with her.

Bradenton is less than an hour’s drive south from Tampa. When I arrived at her apartment complex early on a Friday afternoon in September, Essengue was wearing green pants and an oversize red shirt as she greeted me at the door, baby Jamerson in her arms.

Essengue is about 5-foot-5, with arresting brown eyes. As she took off her mask on the big couch, we reassured each other that we had been vaccinated. She placed Jamerson in his playpen, and for the next three hours she relived her journey from Cameroon to the US.

Essengue told me the church members had rented this apartment for her and ensured that all her needs are met, including counselling. She talked excitedly about the future: The church community has organised online classes for her to obtain a GED. She laughed at her wish to become a nurse despite being afraid of blood. She paused periodically to attend to Jamerson’s cries, but also because sometimes the enormity of what she went through overcomes her.

She lit up when I asked about life in Cameroon before the conflict and turned solemn when she talked about her mother and the two children she left behind. “I pray, ‘Let them grant me the asylum to bring my children over,’ because Cameroon now is really horrible,” she said near the end of the conversation. “It’s not a place to stay anymore.”

Dalmacy arrived in the late afternoon. He is a tall man, much younger-looking than his 43 years. He sat down in a chair opposite Essengue and me. Since he doesn’t speak much English, and both his French and mine cannot be trusted for such a complex conversation, Essengue acted as translator. After his eventual deportation back to Haiti in February, he said, a near-death experience was the catalyst for his decision to flee the country again: “They had killed a gangbanger right next to me.”

Essengue turned to me and narrated the story as he told it to her. “Because the bullet hit the intended target, the person fell right in front of him. Can you imagine that kind of shock?” she said. “So he was traumatizsed again. He felt if he stayed in Haiti, he was going to die.”

Soon after the incident, Essengue said, she pushed Dalmacy to go to the Dominican Republic and obtain a travel document that would allow him to enter Mexico. With help from American immigration advocates in Mexico, he was allowed back in the country at the end of June.

In August, the US Department of Homeland Security announced a new temporary protected status, or TPS, for Haitian nationals until February 3, 2023, covering those who’d arrived in the United States by July 29, 2021. Dalmacy just made the cut and is now navigating the application process and, thereafter, the one for asylum.

Neither Dalmacy nor Essengue has any guarantee of a long-term future in the US. Essengue told me she had a court date set for January that she was waiting to have rescheduled. In late January, US Citizenship and Immigration Services denied her application for a work authorisation, though she said her lawyer will be reapplying.

While asylum cases are supposed to be determined within 180 days, there is currently a backlog of over 667,000 cases. It could be months or years before she and Dalmacy obtain decisions.

Temporary protected status, which is afforded to citizens from 12 countries including Haiti, leaves many migrants unable to plan a future here beyond a limited period of time. Yet advocates like the Haitian Bridge Alliance keep pressing for an extension for Haitian migrants, while others, like the Cameroon Advocacy Network, are pushing the US government to grant it to Cameroonian nationals.

Despite TPS’s uncertain duration, it could offer Cameroonian nationals who are already here, like Essengue and others arriving at the southern border, some protection.

“We have the elements of TPS, which has to do with temporary inhumane conditions that are happening [because] of human rights abuses,” Daniel Tse, who founded the Cameroon Advocacy Network, said.

“Cameroon meets the criteria for this TPS…. How long do they want to evaluate the country? It’s not that this country doesn’t meet the criteria. It’s just that they don’t want to give it.”

Two days after meeting with Essengue and Dalmacy in their new home, I attended church with her and Jamerson. Much of the congregation at Trinity Lutheran was made up of older white adults, and many of them surrounded Essengue and Jamerson both before and after the 11 am service. I noticed, too, that the church bulletin invited congregants to “join Julliana Essengue’s team.”

It was the weekend of the 20th anniversary of September 11, and Blackburn’s sermon focused on “drawing our families’ circles bigger” – expanding whom we consider family. It would strike me later that throughout my reporting on this article, so many of the migrants’ stories involved depending on people they’d just met as if they were family.

For now, Essengue remains on this side of the border, and she feels like one of the lucky ones: The church community has expanded its sense of family to include her.

Other Black migrants have not been and will not be as fortunate. What will become of them? Their trail of tragedy may end as it began: as a nightmare, with them dying on the journey to safety or spending indefinite periods in detention.

Many will be deported back to the nations and circumstances that prompted their migration to begin with, leaving them to decide once again whether to flee or stay where they are – to determine which choice is the better one for survival.