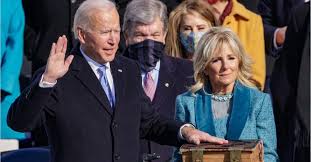 Biden at his inauguration: Politics doesn’t have to be a raging fire

Joe Biden was sworn-in on Wednesday as the 46th president of the United States, marking the official start to an administration that must now turn its attention to the global coronavirus pandemic, economic turmoil and deep divisions about the state of American politics and leadership.

Forty-eight years after he entered Congress as the junior senator from Delaware, Biden stood on the steps of the US Capitol and recited the oath of office enshrined in the Constitution – words that have been spoken by his predecessors, dating back to President George Washington.

Facing a raging pandemic that has killed more than 400,000 Americans, the inaugural festivities were stripped of much of their pomp and circumstance, but the symbolism of the peaceful transfer of power – a bedrock principle of American democracy – was nevertheless clear. Lawmakers and former presidents of both parties and members of the Supreme Court, wearing masks as they took their seats, were on hand to witness the ceremony.

Biden, 78, takes the helm at a precarious moment in US history, as the nation continues its struggle with the deadly virus and the logistical challenge of vaccinating hundreds of millions of people. He also enters office just days after a mob supporting former President Donald Trump stormed the Capitol, underscoring simmering tensions in national politics that Biden must confront to advance his agenda.

Biden borrowed a theme from his Democratic convention speech during the summer about choosing light over darkness in the pursuit of public good.

“We shall write an American story of hope not fear, of unity not division, of light not darkness, a story of decency and dignity, love and healing, greatness and goodness,” Biden said.

“May this be the story that guides us, the story that inspires us and the story that tells ages yet to come that we answered the call of history, we met the moment, democracy and hope, truth and justice did not die on our watch, but thrived,” Biden said.

“That America secured liberty at home and stood once again as a beacon to the world,” Biden That is what we owe our forebears and generations to follow.”

To the international audience, Biden said he knows that the world is watching.

His message to those outside the nation’s borders, he said, is: “America has been tested and we’re stronger for it.”

Biden promised to repair alliances with other countries and to “engage with the world once again.”

And, as he’s said before, Biden repeated that America shouldn’t lead by the example of the nation’s power, but by the power of example.

Biden called on Americans to combat the raging coronavirus pandemic as one nation – and said it must in order to prevail.

“My fellow Americans, in the work ahead of us, we’re going to need each other,” Biden said. “We must finally meet this pandemic as one nation. We will get through this together – together.”

He then led a silent prayer for the 400,000 Americans who have died from the Covid-19 virus.

Biden noted the resilience of the country enduring through violence, whether during the Civil War, protests 108 years ago against women’s suffrage or the riot January 6.

“Here we stand in the shadow of the Capitol dome, as was mentioned earlier, completed during the Civil War, when the Union itself was literally hanging in the balance,” Biden said. “Yet we endured, we prevailed.”

Biden said the country was being tested, but would rise to resolve disputes without violence.

“Here we stand across the Potomac, where heroes who gave the last full measure of devotion rest in eternal peace,” Biden said. “Here we stand, just days after a riotous mob thought they could use violence to silence the will of the people, to stop the work of democracy, to drive us from this sacred ground.

“It did not happen,” Biden added. “It will never happen. Not today. Not tomorrow. Not ever. Not ever.”

Addressing those who did not vote for him, Biden asked that they “hear me out as we move forward.

“Take your measure of me and my heart,” he said. “If you still disagree, so be it. That’s democracy.”

Even if opponents can’t support him, Biden said, he will still fight as hard for them as he will for those who backed his candidacy.

In a call for unity, Biden said, “Politics doesn’t have to be a raging fire” as he called for Americans to “start fresh” and come together to meet the crises of the times.

“I believe America is so much better than this,” Biden said, noting that throughout history America has prevailed over division.

“I know the forces that divide us are deep and they are real. But I also know they are not new,” he said. “History, faith and reason show the way of unity. We can see each other not as adversaries, but as neighbours. We can treat each other with dignity and respect.”

He added: “This is our historic moment of crisis and challenge, and unity is the path forward. And we must meet this challenge as the United States of America. I guarantee you that if we do that we will not fail.”

Biden promised to press forward with “speed and urgency,” saying there is much to do in” this winter of peril.”

Few people have been more challenged or found a time more challenging, Biden said. Many jobs have been lost, businesses have closed and there’s a cry for racial justice.

“The dream of justice for all will be deferred no longer,” Biden said.

He pledged to confront and defeat the rise of political extremism, white supremacy and domestic terrorism.

But doing so will require the most important part of democracy, he added: unity.

“For without unity, there is no peace, only bitterness and fury. No progress, only exhausting outrage,” he said. “Unity is the path forward.”

Biden welcomed former presidents of both parties to his inauguration, welcoming to them to “this hallowed ground, where just a few days ago, violence sought to shake the Capitol’s very foundation,” to carry out the peaceful transfer of power.

Former Presidents Bill Clinton, George W. Bush and Barack Obama sat behind him. Biden said he spoke with former President Jimmy Carter, who was unable to attend, but whom Biden saluted for his lifetime of service.

“I thank my predecessors of both parties for their presence here today,” Biden said. “I thank them from the bottom of my heart.”

After being sworn in as president 12 minutes before noon, Biden began his inaugural address declaring, “Democracy has prevailed.”

“This is America’s day,” Biden said. “This is democracy’s day, a day of history and hope, of renewal of resolve. Through a crucible for the ages, America has been tested anew. And America has risen to the challenge.”

“Today, we celebrate the triumph not of a candidate but of a cause, the cause of democracy. The people – the will of the people — have been heard.”

The inauguration came two weeks after the Capitol was under assault by a group of pro-Trump supporters who stormed Congress while it was counting electoral votes.

Biden was introduced to the podium by Sen. Amy Klobuchar, D-Minn., a chair of the Inaugural Committee.