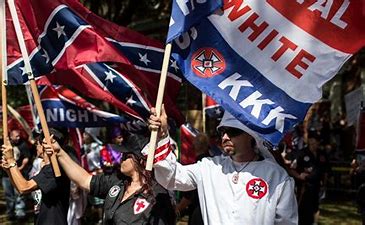 Banning White supremacism is not censorship, it is accountability

Early last month, in the wake of the fatal incursion of an angry, mostly white and male mob into the Capitol Building in Washington, DC, Facebook and Twitter blocked Donald Trump’s accounts. YouTube followed with a temporary ban, which it has continued to extend in the weeks since. According to these platforms, Trump’s dangerous pattern of behaviour violated their content management rules.

Shortly after, Amazon Web Services ended its hosting support for the neo-Nazi online haven Parler. Parler countered with a lawsuit alleging that Amazon’s decision was an antitrust violation motivated by political animus, which the courts readily rejected.

In the coming days, Facebook’s Oversight Board is expected to issue a final decision on whether to allow the former president back on its platform.

The collective sigh of relief that rippled through the digital spaces occupied by Black, indigenous and other people of colour following the wave of deplatformings was visceral and the impact was almost immediate.

A study conducted by research firm Zignal Labs found that online disinformation, particularly about election fraud, fell by an incredible 73 per cent in the week after Twitter’s suspension of Trump’s social media account. Online forums for Trump supporters are now fractured and weakened.

But many reacted to the social media bans with outrage. First Amendment fundamentalists across the political spectrum raised “free speech” concerns, claiming that the social media bans were a slippery slope. Though they’re being used to hold the powerful to account today, the argument goes, they could be used to repress minority groups in the future.

Others worried that a digital oligarchy of big tech companies like Facebook, Twitter, Google, Apple, and Amazon with the unchecked power to silence individuals represents a threat to democracy.

I share the concern about the outsize influence of big tech on governance and the economy. But, as a Black activist who’s been fighting for digital rights and justice and against digital disparities, surveillance and hate for more than a decade, the reaction that most resonated was relief and a sense of collective triumph.

Finally, after years of organizing, movements for racial justice and human rights were able to hold these companies accountable to the demand that they give no platform or profit to white supremacy—at least momentarily.

That it took so long and such extreme circumstances for the platforms to take action, despite years of warnings and complaints, is nothing short of enraging. But it’s also not terribly surprising, especially when you consider the unequal distribution of First Amendment rights on the internet.

For the past decade, we have witnessed the resurgence of white supremacy in mainstream political and public debate and it’s only been enabled by media platforms like Facebook, Twitter, and YouTube. While those already in power may rely on the Constitution and the democratising promise of the open internet, Black people and other marginalised groups need more than the intent of the law to enjoy its equal protection.

This is not about the inherent objective of the First Amendment as law, or even about its shifting interpretations by courts over time – it is about the impact that white supremacy, anti-Black violence, and other forms of racial terrorism abetted by so-called free speech have on the speech and freedoms of Black and brown Americans.

When Black activists and other protected classes are silenced on Facebook, Twitter and other social platforms for talking about or organising against racism, that’s censorship. But when an oppressed minority seeks equality and justice and freedom from the harm and violence brought on by the systematically privileged speech of others, that’s not censorship, that’s accountability.

Claims stating otherwise are misguided at best and at worst represent a very distorted understanding of the way speech, race, and power work online.

When I began organising in earnest to defend the internet in 2009, my efforts were driven by the great promise that an open internet without corporate gatekeepers would, in time, level the playing field for all speech.

My hope was further inspired by the role social media platforms such as Twitter and Facebook played in aiding and giving international voice to the Arab Spring movement. Just a few years later, Occupy Wall Street also used social media as a means to bypass an exclusive and elitist mainstream media to amplify stories of economic inequity, branding the phrase “We are the 99 per cent.”

Then, in 2013, the hashtag #BlackLivesMatter emerged on Twitter, giving national and international voice to a growing movement for Black lives and against unchecked, systemic police violence.

But, as I quickly learned, without adequate mechanisms to protect the speech of those historically discriminated against and excluded by all vehicles of modern voice – from school and universities to the ballot box, to media publishers and platforms – the marketplace of ideas ends up just like the actual marketplace, rigged to protect the speech of those already in power.

For instance, both the presidential elections of 2016 and 2020 were flooded with disinformation aimed explicitly at limiting the voting rights and political power of Black and Latino voters. The differing levels of police aggression against the seditious mob that recently attacked the Capitol versus the largely peaceful anti-racist protesters in almost every US city demonstrates a racialized double standard in freedom of assembly.

Black communities don’t enjoy a free and fair press either: Eighty-three per cent of newsroom staff are white. Racial disparities in media publishing have left the internet as a singular alternative for Black voices. But when the internet is riddled with racism, Black speech becomes a canary in a digital coal mine.

Meanwhile, white supremacists of all kinds have historically enjoyed unfettered access to the means and mechanisms of speech. This is as true in a digital age as it has ever been. A 2017 Pew study found that one in four Black Americans have been threatened or harassed online because of their race or ethnicity.

With Black and indigenous women killed in America more than any other race, the confluence of digital and real world racial and gendered violence is undeniable, at least by those who directly experience it.

In digital age, there is real need to protect the rights of Black and brown people