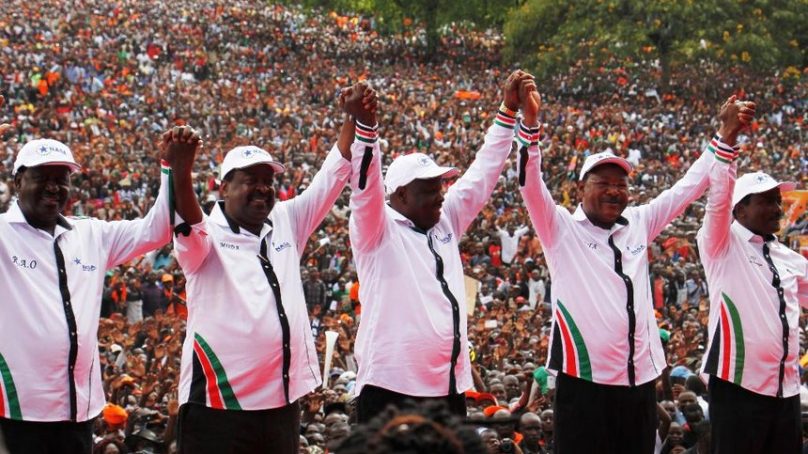 For so long, Kenyan leaders have conditioned the populace to accept corruption. A collective state of mind exists in which the ordinary Kenyan has come to expect America, Europe and other foreigners to solve his pressing problems through all forms of aid. Call it a tragic dependency syndrome.

The ordinary Kenyan has allowed himself to think that the world owes him everything. This mentality is held by the majority – from the educated to the political elite and even the hawker on the streets, who really does deserve more assistance from the kleptocrats in the Kenyan government.

This social disease is spawned from an unwillingness to accept collective responsibility as a nation. But things are beginning to change. The resistance that is beginning to build against the current kleptocracy could be the beginning of a Kenya Spring.

The rest of the world had started to wonder about Kenya and its people. But thank God for the opposition coalition, Nasa (National Super Alliance). The world was awed by the speeches at the Uhuru Park on April 27, 2017 when Raila Odinga announced that he would be Nasa’s flagbearer.

Nasa was the opposition made up regional kleptocrats who were salivating for the pork (and barrel) their rivals from Mt Kenya and Rift Valley regions had been enjoying since the controversial 2013 presidential election.

Prime Minister Raila Odinga had a chance to lead Kenyans in what he really stands for. His supporters had a good chance to listen to him – in public and private. The nation watched the five Nasa principals – Isaac Rutto, Moses Wetang’ula, Musalia Mudavadi, Kalonzo Musyoka and Raila outline their plans for Kenya.

The country was more convinced than ever that Raila Odinga was the president Kenya needed to haul it out of its hopelessness headlined by anarchy in all national spheres – education, agriculture, health, sports, technology, finance, public transport, etc.

Seriously, Raila’s speech was great! It showed a leader with a prophecy, a rational approach to getting things done and a vigorous character for balancing the need to reinforce our social safety nets with releasing Kenya’s entrepreneurial spirit to generate the growth required to sustain societal programmes.

So, thank you, Uhuru and Ruto for presiding over a kleptocratic state and opening a way for Nasa to govern. Before is crumbled, Nasa had built a mandate for what the principles really believed in – a tribe-less nation.

Why Nasa?  Because an elective despotism is not the government Kenyans wanted! Why? Let’s juxtapose it with the declaration of United States of America independence:

“When in the course of human events it becomes necessary for one people to dissolve the political bands which have connected them with another and to assume among the powers of the earth, the separate and equal station to which the Laws of Nature and of Nature’s God entitle them, a decent respect to the opinions of mankind requires that they should declare the causes which impel them to the separation.”

That was the unanimous Declaration of the thirteen United States of America. So, it seemed with Nasa. It had become necessary for Kenyans to separate from Jubilee – as so valiantly former Bomet Governor Isaac Rutto so valiantly chose to do despite the heavy odds he faced.

Governments are instituted among people, deriving their fair powers from the consensus of the governed, yet in Kenya, a band of thieving, conniving tribal kingpins have held the country captive. The Jubilee regime has become destructive in managing the affairs of the nation – from security, education, economy to corruption.

Through Nasa, the People had a chance to abolish it and to institute a new government, laying its foundation on the principles of peace, prosperity, health and a tribalism-free Kenya. Nasa indeed did promise to abolish the old government for petty and temporary causes. No, it had vowed to do so for Kenya’s existential causes.

Prime Minister Raila Odinga said, “My dream is like Joshua, to lead you to the Promised Land.” Because of the long train of manipulations and corruption by Jubilee, invariably Nasa’s object revealed a strategy to end a despotic Jubilee administration.

And it is the right, it is the duty, of every right-minded citizen to throw off such a CORRUPT REGIME and to provide new protections for the future security of the nation. Such has been the patient acquiescence of these Kenyans and such is now the stipulation which obliges them to change their previous systems of Government.

The history of the Kenyatta government – like his father’s (Jomo Kenyatta) before him is a history of recurrent grievances and usurpations, all having in undeviating purpose of the recreation of an absolute dictatorship over the counties. To substantiate this, let Truths be told to an open nation.

The question begs: who is ready to tell this Truth? Are Kenyans ready to make sacrifices to get to the truth or will they wait for Americans, Europeans and other foreigners to give them aid? Kenyans should not fold their hands and hope the situation resolves itself.

Kenya has been ranked one of the most corrupt countries in Africa and on the globe. Transparency International’s corruption index placed the country 145 out of 176 countries with a score of 26 in 2017. To this day, the ranking has not improved. The looting has instead grown more brazen, with President Kenyatta admitting recently that the country loses Ksh2 billion ($100 million) daily to corruption.

On corruption, President Kenyatta is no more than a sitting duck. In every stage of these repressions, the opposition parties have implored for reparation in the most-humble terms: their repeated supplications have been rejointed only by repeated wrong.

A president whose personality is thus stained by every deed which may describe a Dictator, is unqualified to be the leader of a free nation. Therefore, Nasa – allegedly, the party of the oppressed and poor – assembled at Uhuru Park on April 27, 2017 to announce that Prime Minister Raila Odinga would be the next President of Kenya. Ordinary Kenyans were hopeful, and they have every right to be.

Kenya has a right to be free of tyranny, corruption and poverty. Nasa had the full mandate of the people to free it from historical injustices and marginalisation. And for the support of Nasa, the people should elect Raila Odinga to lead Kenya on a new path of recovery and prosperity.

To outsiders, especially the donor community the governing elites is Kenya are “uncontrollable bastards”, which makes the evils of tribal warfare as complex as those of terrorism. In Kenya, too many tribal factions have invested too much blood in fighting each other. With one horrific act, Kenya is faced with a nightmare of that even she has never dared imagine.