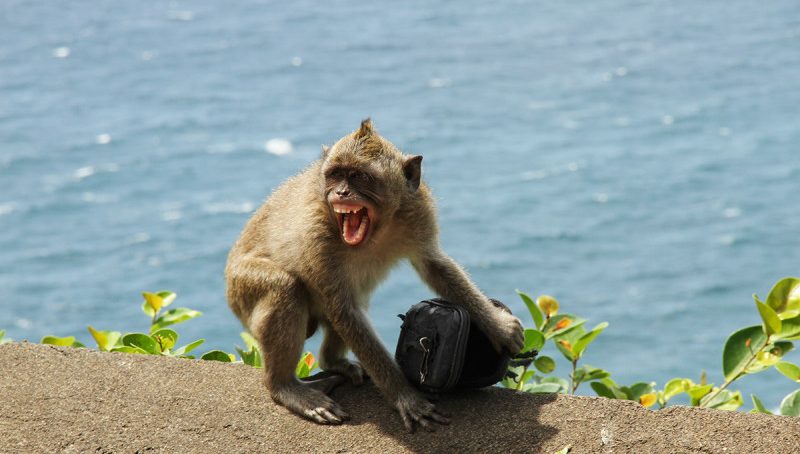 At the Uluwatu temple in Bali, monkeys mean business. The long-tailed macaques who roam the ancient site are infamous for brazenly robbing unsuspecting tourists and clinging on to their possessions until food is offered as ransom payment.

Researchers have found they are also skilled at judging which items their victims value the most and using this information to maximise their profit.

Shrewd macaques prefer to target items that humans are most likely to exchange for food, such as electronics, rather than objects that tourists care less about, such as hairpins or empty camera bags, said Dr Jean-Baptiste Leca, an associate professor in the psychology department at the University of Lethbridge in Canada and lead author of the study.

Mobile phones, wallets and prescription glasses are among the high-value possessions the monkeys aim to steal.

“These monkeys have become experts at snatching them from absent-minded tourists who didn’t listen to the temple staff’s recommendations to keep all valuables inside zipped handbags firmly tied around their necks and backs,” said Leca.

After spending more than 273 days filming interactions between the animals and temple visitors, researchers found that the macaques would demand better rewards – such as more food – for higher-valued items.

Bargaining between a monkey robber, tourist and a temple staff member quite often lasted several minutes. The longest wait before an item was returned was 25 minutes, including 17 minutes of negotiation. For lower-valued items, the monkeys were more likely to conclude successful bartering sessions by accepting a lesser reward.

Unlike many previous studies that have examined similar behaviour, the macaques at Uluwatu, a Hindu temple, are free-ranging animals and were not being observed in a laboratory setting.

Such behaviours are learned by the monkeys throughout juvenescence, up until they are four years old, according to the research, which was funded by the Natural Sciences and Engineering Research Council of Canada (NSERC) and the Alberta Gambling Research Institute (AGRI) and published in Philosophical Transactions of the Royal Society.

Robbing and bartering is an expression of cultural intelligence on the part of the monkeys, said Leca. “These behaviours are socially learned and have been maintained across generations of monkeys for at least 30 years in this population.”

While temple staff at Uluwatu are on hand to ease monkey-tourist relations, managing the animals is a challenge in many other areas of the world. Marauding monkeys are infamous for causing trouble across India – eating farmers’ crops, raiding homes in villages and cities alike, and even mobbing a health worker and making off with blood samples from coronavirus tests.

There are concerns that, in many regions, monkeys have become more aggressive because the pandemic has left them with little to eat. In Thailand, officials began sterilising monkeys in Lopburi, a city famous for its macaque population, last year. The lack of tourists during the pandemic has left the animals hungry, and increasingly hard to live alongside.