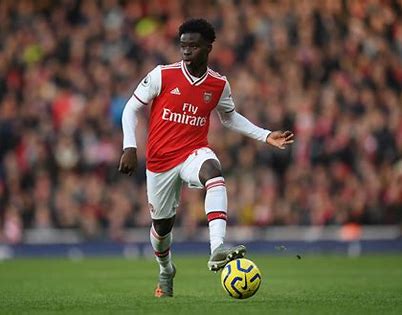 Premier League champions Manchester City are increasing their efforts to sign Arsenal star Bukayo Saka. But in a quick rejoinder, former Arsenal winger Theo Walcott has warned that Saka may not have time at Man City to realise his full potential.

Walcott says he believes Saka should stay at Arsenal and warned that his game time may be “limited” if he decides to join Liverpool this summer.

Pep Guardiola’s side are now keeping a close eye on developments with Saka and his Gunners contract, with just two years left to run on his current deal, reports Sportsmail. It is thought that one of the priorities this summer from the Gunners’ club hierarchy is to tie down Saka’s long-term future to the Emirates.

City are not the only Premier League giants interested in prying Saka away from North London, with Jurgen Klopp’s Liverpool also keen admirers of the 20-year-old. However, while it is important to note that any move in the upcoming summer transfer window would appear extremely unlikely, that simply buys Arsenal time, with the Gunners knowing all too well that if they fail to agree a new deal soon, the threat of a cut-price exit in 2023, or a free transfer in 2024, grows and grows.

The England international’s current contract contains an option year, meaning if Arsenal activates it – as they almost certainly will – then Saka is signed to the club until the summer of 2024. The desire to offer him a new and improved contract with significantly higher wages is strong among Arsenal officials, who recognise Saka’s growing importance to the team.

At this point in time, Arsenal could command a huge fee for Saka were any club to attempt to take him this summer. And with Arsenal unwilling to sell right now, it would likely be in excess of £100 million.

There has been reports suggesting Manchester City are interested in Saka, but sources at the club have told Mirror Sport there is “nothing in the rumours” linking them with a move for the highly-rated winger this summer. City have already completed the big-money signing of Erling Haaland from Borussia Dortmund this summer, while forward Julian Alvarez is also set to arrive from River Plate.

Meanwhile, Liverpool are said to be admirers of the 20-year-old as Jurgen Klopp looks to strengthen his attacking options with Sadio Mane set to join Bayern Munich and Mohamed Salah expected to leave when his contract expires next summer.

Saka is firmly on the Reds’ radar despite the impressive form of Luis Diaz, who has shone since his move from Porto, while Diogo Jota also produced some excellent numbers last term. Roberto Firmino and Takumi Minamino are the other two current senior forwards at the Reds with Divock Origi leaving the club this summer.

United Nations adopts resolution to combat piracy in Gulf of Guinea, dubbed most dangerous waters in the world