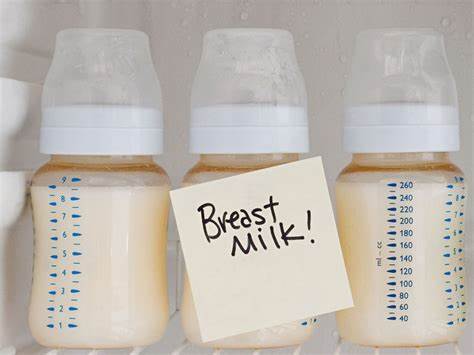 Researchers have long known that new-born babies don’t effectively produce antibodies against harmful bacteria and viruses; and it can take three to six months for this kind of protection to kick in. To help in those early days, a mother’s breast milk overflows with antibodies capable of staving off potential threats.

“It’s specifically designed by the mother, and by Mother Nature, to provide the child with the child’s first vaccine,” says Hedvig Nordeng at the University of Oslo, who specializes in medication use and safety in pregnancy and lactation. “Breast milk by itself is more than nutrition, breast milk is medicine.”

In the mother, immune cells called B lymphocytes (or B cells) constantly produce antibodies. Then, once lactation begins, the mammary glands send out a chemical signal that draws these B cells to the breast, where they park in the glands and produce thousands of antibodies per second, ready to move into the breast milk in huge quantities.

But unlike molecules from medications, coffee and alcoholic drinks, which are so small they can pass into the breast milk on their own (although at diluted levels), antibodies are too large to do so. Instead, receptors on the surface of the milk ducts grab the antibodies and package them in protective, fluid-filled bubbles that allow them to pass safely through the milk-duct cells and into the milk on the other side.

“This process is so magical,” says Galit Alter, an immunologist and virologist at Harvard Medical School in Boston, who worked on Gray’s study.

What happens once antibodies reach the baby, however, is more mysterious. Antibodies in the breast milk do not make it into a baby’s bloodstream, but coat the mouth, throat and gut before they’re ultimately digested.

Nonetheless, these antibodies seem to provide protection. It could be that they work at the body’s entrances to fend off infection before it takes root.

Not all babies are raised on breast milk, but studies have shown that babies who exclusively breastfeed for their first six months have far fewer middle-ear infections than those who are breastfed for a shorter time, or not at all. They also have a lower risk of respiratory-tract infections. And lactating mothers who receive the influenza vaccine (and therefore transmit those protective antibodies to their infant through breast milk) provide some protection to babies who are too young to receive the shot.

When Gray and her colleagues, for example, checked the blood and the breast milk of lactating mothers who had received a Covid-19 vaccine, they found high levels of Covid-19 antibodies in every sample.

“It’s very nice after this past year to have a tiny bit of good news,” says paediatric immunologist Bridget Young at the University of Rochester Medical Center.

And it’s a particularly exciting finding given that babies are not currently eligible to receive any of the available vaccines (although both Pfizer-BioNTech and Moderna have started trials of their Covid-19 vaccines in children as young as six months).

Whereas Covid-19 is often mild in younger populations, babies less than two years of age who contract the disease are more likely to be hospitalized than older children are. That’s thought to be because the bronchioles, the passageways that deliver air to the lungs, are much smaller in babies.

In addition, babies and children can develop a severe illness known as MIS-C (multisystem inflammatory syndrome in children), in which different parts of the body become inflamed after the child contracts Covid-19.

To begin, scientists aren’t sure whether these antibodies are actually functional — meaning that they would kill the virus that causes Covid-19 if they came into contact with it. But early research is promising.

Last year, a team in the Netherlands collected antibodies from the breast milk of people with a previous SARS-CoV-2 infection and found that the samples could neutralize the virus in the laboratory13. A month later, Young, Jarvinen-Seppo and their colleagues posted similar findings, which were subsequently published.

Both teams are currently conducting the same experiment with vaccine-induced antibodies, following a study by scientists in Israel suggesting that antibodies created after vaccination could stop the virus infecting cells. The authors of that study predict that these antibodies should protect the baby, says Yariv Wine, an immunologist at Tel Aviv University and a co-author of the paper.

But this can happen only if the antibodies persist. Scientists don’t yet know how long vaccinated people will continue to make Covid-19 antibodies, but evidence indicates they do so for a considerable time; one study of 33 people suggests that antibody production in adults given the Moderna vaccine continues for at least six months. That could mean that babies will continue to receive some protection from their mothers as long as they continue nursing, although antibody concentrations in breast milk do drop over time.

And that constant replenishment is key. Scientists suspect that antibodies are digested in the baby’s gut after hours to days. That means their partial immunity will probably disappear once breastfeeding has ceased. It also suggests that giving breast milk to older children (as many vaccinated mothers have discussed in online forums) probably won’t give them partial immunity – at least not for long.

But even for babies who are exclusively breastfed, clinicians urge mothers to continue to follow public-health strategies when they have visitors.

“Anyone who’s handling the baby in close contact really should be vaccinated and should be masked,” says Andrea Edlow, a maternal-foetal medicine specialist at Harvard Medical School and Massachusetts General Hospital, who worked on the study with Gray.

Luckily, more data are on the way. Gray and her team will be tracking their participants, including Siegel and others, for a full year (although the details are still being discussed).

Gaw’s team at the University of California, San Francisco, is planning to assess the overall health and rate of infections of babies while they’re being breastfed – the million-dollar question at the moment. The two studies pitting vaccine-induced antibodies against the virus in a Petri dish should offer another answer to this question.

Scientists are also working to analyse the antibodies in further detail. Chambers and her colleagues at the University of California, San Diego, for example, currently receive milk samples from roughly 40 participants per day; they also plan to follow the babies’ growth and development.

Nonetheless, the results so far are promising enough that most experts would urge nursing mothers to get their shots. “If I had an itty-bitty baby right now, I would not take the risk – I would not wait,” Alter says. “If you can empower your kid with immunity, I wouldn’t even question it.”