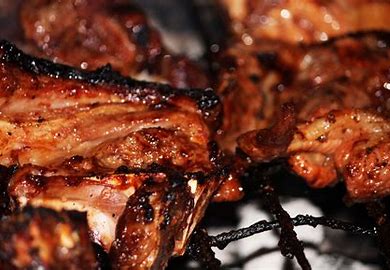 Meat scientists (many of them, unsurprisingly, in Texas) have spent whole careers studying how to produce the tenderest, most flavourful beef possible. Much of what they’ve learned holds lessons only for cattle producers and processors, but a few of their findings can guide backyard grill masters in their choice of meat and details of the grilling process.

Let’s start with the choice of meat. Every experienced cook knows that the lightly used muscles of the loin, along the backbone, have less connective tissue and thus give tenderer results than the hard-working muscles of the leg. And they know to look for steaks with lots of marbling, the fat deposits between muscle fibres that are a sign of high-quality meat.

“If you have more marbling, the meat will be tenderer, juicier, and it will have richer flavor,” says Sulaiman Matarneh, a meat scientist at Utah State University who wrote about muscle biology and meat quality in the 2021 Annual Review of Animal Biosciences.

From a flavor perspective, in fact, the differences between one steak and the next are mostly a matter of fat content: the amount of marbling and the composition of the fatty acid subunits of the fat molecules.

That fatty acid difference also plays out in a big decision that consumers make when they buy a steak: grain-fed or grass-fed beef? Grain-fed cattle – animals that live their final months in a feedlot eating a diet rich in corn and soybeans – have meat that’s higher in oleic acid. Animals that spend their whole life grazing on pasture have a higher proportion of omega-3 fatty acids, polyunsaturated fatty acids that break down into smaller molecules with fishy and gamy flavors. Many consumers prefer to buy grass-fed beef anyway, either to avoid the ethical issues of feedlots or because they like that gamy flavor and leaner meat.

A beef cow’s diet affects the flavor of the meat. Grain-fed cattle, such as those shown here in a California feedlot, produce meat marbled with more fat than grass-fed cattle, which graze on pasture their entire lives.

The biggest influence on the final flavor of that steak, though, is how you cook it. Flavorwise, cooking meat accomplishes two things. First, the heat of the grill breaks the meat’s fatty acids into smaller molecules that are more volatile – that is, more likely to become airborne.

These volatiles are responsible for the steak’s aroma, which accounts for the majority of its flavor. Molecules called aldehydes, ketones and alcohols among that breakdown mix are what we perceive as distinctively beefy.

The second way that cooking builds flavor is through browning, a process that chemists call the Maillard reaction. This is a fantastically complex process in which amino acids and traces of sugars in the meat react at high temperatures to kick off a cascade of chemical changes that result in many different volatile end products.

Most important of these are molecules called pyrazines and furans, which contribute the roasty, nutty flavors that steak aficionados crave. The longer and hotter the cooking, the deeper into the Maillard reaction you go and the more of these desirable end products you get – until eventually, the meat starts to char, producing undesirable bitter, burnt flavors.

The challenge for the grill-master is to achieve the ideal level of Maillard products at the moment the meat reaches the desired degree of doneness. Here, there are three variables to play with: temperature, time and the thickness of the steak.

Thin steaks cook through more quickly, so they need a hot grill to generate enough browning in the short time available, says Chris Kerth, a meat scientist at Texas A&M University. Kerth and his colleagues have studied this process in the lab, searing steaks to precise specifications and feeding the results into a gas chromatograph, which measures the amount of each volatile chemical produced.

Kerth found, as expected, that thin, half-inch steaks cooked at relatively low temperatures have mostly the beefy flavors characteristic of fatty acid breakdown, while higher temperatures also produce a lot of the roasty pyrazines that result from the Maillard reaction. So if your steak is thin, crank up that grill — and leave the lid open so that the meat cooks through a little more slowly. That will give you time to build a complex, beefy-roasty flavor.

And to get the best sear on both sides, flip the meat about a third of the way through the expected cook time, not halfway – that’s because as the first side cooks, the contracting muscle fibers drive water to the uncooked side. After you flip, this water cools the second side so it takes longer to brown, Kerth’s team found.

The flavor of a steak comes mostly from small molecules produced as the meat cooks. Here are some of those molecules and the flavor notes they impart. If you’re a meat eater, see if you can pick out some of these flavors in your next steak.

When the scientists tested thicker, 1.5-inch steaks, the opposite problem happened: The exterior would burn unpleasantly before the middle-finished cooking. For these steaks, a moderate grill temperature gave the best mix of volatiles.

And sure enough, when Kerth’s team tested their steaks on actual people, they found that diners gave lower ratings to thick steaks grilled hot and fast. Diners rated the other temperatures and cooking times as all similar to each other, but thick steaks cooked at moderate temperatures won out by a nose.

That might seem odd, given that steakhouses often boast of their thick slabs of prime beef and the intense heat of their grills – exactly the combination Kerth’s study found least desirable. It works because the steakhouses use a two-step cooking process: First, they sear the meat on the hot grill, and then they finish cooking in a moderate oven.

“That way, they get the degree of doneness to match the sear that they want,” says Kerth. Home cooks can do the same by popping their seared meat into a 350°F oven until it reaches their desired doneness.

The best degree of doneness, of course, is largely a matter of personal preference — but science has something to say here, too. Meat left rare, says Kerth, doesn’t receive enough heat to break down its fatty acids to generate beefy flavors. And once you go past medium, you lose some of the “bloody” flavors that come with lightly cooked meat.

“A lot of people, myself included, like a little bit of bloody note with the brown pyrazines and Maillard compounds,” says Kerth. “It has a bigger flavor.” For those reasons, he advises, “I wouldn’t go any lower than medium rare or certainly any higher than medium. Then you just start losing a lot of the flavor.”

Kerth has one more piece of advice for home cooks: Watch the meat closely when it’s on the grill! “When you’re at those temperatures, a lot happens in a short period of time,” he says. “You start getting a lot of chemical reactions happening very, very quickly.”

That’s the scientific basis for what every experienced griller has learned from (literally) bitter experience: It’s easy to burn the meat if you’re not paying attention.