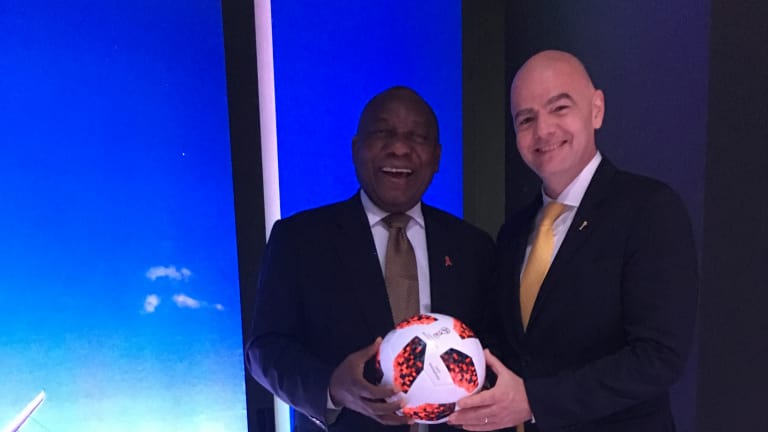 African Union and Federation Internationale de Football Association (Fifa) have vowed to further grow the positive momentum of collaboration between both organisations in the past two years for the benefit of Africa.

Speaking during a conference call that preceded the 34th Ordinary Session of the Assembly of the Heads of State and Government, AU Chairperson Cyril Ramaphosa and Fifa President Gianni Infantino applauded the enhanced working relationship between two bodies since the signing of a memorandum of understanding two years ago.

Reviewing the progress after the MOU signed in February 2019, President Ramaphosa and President Infantino discussed further plans to boost African football with a particular focus on infrastructure development – stadia, football pitches, football academies and competitions – and the fight against match manipulation, as well as safety and security at football matches in Africa.

The joint #SafeHome campaign from August 2020 between the AU and Fifa, with the support of the World Health Organisation (WHO) and the Confederation of African Football, has seen the four organisations jointly address issues of health and social concerns on the continent.

The four organisations addressed rising incidence of domestic violence that has been exacerbated by Covid-19-related lockdowns and stay-at-home measures. They praised a successful awareness-raising campaign that has been received well by other national and regional bodies.

The leaders said the success of the campaign is a further testimony of the collaboration between the AU and Fifa. A number of Africa-based Fifa legends supported the campaign via video awareness messages that were distributed on social and traditional media.

The AU chairperson and the Fifa president also recognised the opportunities that education provide through Football for Schools programme, which is coordinated globally via the Fifa Foundation.

Having visited 35 African countries in the last few years, Gianni Infantino stressed the important role that Africa plays in global football, and how that needs to be strengthened in future. This role has been supported with strong investments via the FIFA Forward programme which has already delivered close to 300 projects across the continent.

The rollout of the Fifa Covid-19 Relief Plan, which has supported football across Africa during the pandemic, has also been significant and continues to play an important role to keep football alive on the continent. Related to Covid-19, the vaccination campaign will also be crucial in the months ahead, they noted.

A statement dispatched after the conference said, “The Fifa president reiterated his support for fair access to vaccines for all, a message that he had passed to a global audience earlier this week at WHO headquarters in Geneva, Switzerland, in the presence of the WHO Director-General, Dr Tedros Adhanom Ghebreyesus.”

Fifa president expressed hope that the strong relationship forged between AU and Fifa in the past two years will continue when President of the Democratic Republic of the Congo Félix Tshisekedi will become African Union Chairperson.