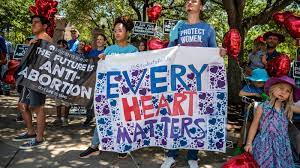 In more than 40 reports published in peer-reviewed scientific journals, researchers analysed what happened to the women, adjusting for potential confounding factors such as age. The overall finding was that, on average, abortion didn’t harm women’s mental or physical health, but being denied an abortion resulted in some negative financial and health outcomes.

“The science clearly shows that abortion is incredibly common, and it is important to women living full lives,” says Diana Greene Foster, leader of the Turnaway Study and a reproductive-health researcher at the University of California, San Francisco.

Recent years have seen the Turnaway and other studies referenced in abortion court cases. For example, judges have cited a 2018 National Academies of Sciences, Engineering and Medicine report finding that abortion is safe. This and other reports find that mortality rates are nearly four times as high for colonoscopies – and 14 times as high for childbirth – as for legal abortion procedures.

Phillip Levine, an economist at Wellesley College in Massachusetts who studies social issues, but didn’t sign an amicus brief because he refrains from abortion-policy advocacy, says the Turnaway Study represents an important advance because it’s designed to answer questions about the long-term effects of abortion and abortion denial on individuals.

“That is a very hard thing to do,” he explains. He adds that his confidence in the study’s results is bolstered by similar findings in Sweden, Finland and the former Czechoslovakia. “Answering these questions perfectly is essentially impossible,” he explains, because researchers can’t conduct clinical trials on the subject. “But the Turnaway Study is some of the best evidence we have.”

The amicus briefs authored by hundreds of scientists ahead of the Mississippi case address a particular line of argument made by state attorney-general Lynn Fitch and her colleagues in their court filing – namely, that abortion is unnecessary and possibly harmful to women.

“Roe and Casey block the States and the people from fully protecting unborn life, women’s health, and their professions,” Fitch and her colleagues write.

They argue that abortion access is no longer necessary because women have the ability to succeed in their professional lives without it. This, the brief explains, is due to the availability of highly effective contraceptives; state assistance, such as adoption services; and policies including those that prevent employers from discriminating on the basis of pregnancy. In a September interview, Fitch said that banning abortion would actually empower women to raise children while pursuing careers.

But half a century of evidence – much of it accumulating in the past decade – runs contrary to these claims, Foster says. Those data appear in the amicus brief that she helped draft with about 100 social scientists who study abortion.

It cites, for example, a 2017 report finding that women who had abortions were no more depressed or anxious than those who wanted one but couldn’t get it, and a 2019 study of nearly 900 revealing that women who sought but were unable to get abortions reported higher rates of chronic headaches and joint pain five years later, compared with those who got an abortion.

Allowing states to ban abortion might even increase maternal and infant mortality rates, according to the brief signed by about 550 public-health and reproductive-health researchers.

Unwanted pregnancies are associated with worse health outcomes for several reasons, including that people who plan their pregnancies tend to change their behaviour – drinking less alcohol, for example – and receive prenatal medical care long before those who are surprised by their pregnancy and don’t want it.

In addressing whether contraceptives obviate the need for abortion, the research briefs point out that abortion is still common — nearly one in four women in the United States will have an abortion by age 455. The briefs also discuss how birth control is fallible, and that young people and poor people have less access to it.

That is one reason why, in the United States as of 2011, women living below the federal poverty level had five times the rate of unintended pregnancies seen in women with high incomes.