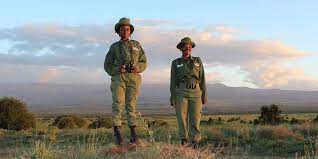 Known as Team Lioness, the cadre’s number will rise to 16. IFAW says the eight new rangers will be fully funded for the next two years by the German foundation “Margarete-Breuer-Stiftung.”

The unit patrols the community lands of the Olgulului-Ololarashi Group Ranch (OOGR), ensuring safety of both people and wildlife.

“Through the MBS Foundation, we are privileged and honoured to support an additional eight remarkable women to join the pioneer group which was recruited two years ago. The rapid growth of Team Lioness is a testament to the need for gender equity in conservation and the community’s acceptance and willingness to support this initiative,” said President and CEO of IFAW Azzedine Downes.

Through a competitive process, 18 shortlisted candidates were assessed based on completion of high school, fitness levels and an interest in wildlife conservation. The eight successful recruits aged between 18 and 24 years, underwent induction and were integrated into Team Lioness during a function presided over by the IFAW CEO and community leaders.

“During their induction training, these eight remarkable women have demonstrated their commitment, discipline and fortitude to joining Team Lioness. We congratulate and welcome them to the Team,” said Patrick Papatiti, Olgulului Community Wildlife Rangers (OCWR) director of operations.

“The work of a ranger is challenging and we applaud you for making the decision to join this noble profession which will require commitment, resilience, mental and physical fortitude,” said James Isiche, Regional Director IFAW East Africa.

“Your work as a member of Team Lioness and OCWR will require that you work long hours under difficult conditions as well as sacrifice your social life so as to serve your community and protect wildlife. As OOGR surrounds Amboseli, you will serve as first responders in enhancing harmonious human wildlife coexistence and also secure the landscape from potential incidences of insecurity to wildlife, more so now with the increase of human wildlife conflict and loss of wildlife habitat,” Isiche explained.

IFAW supports the now 85 Olgulului Community Wildlife Rangers (OCWR) by providing logistical support such as paying their salaries and providing them with all necessary supplies including food rations, medical insurance, equipment including uniforms, vehicles, digital radios, maintenance and running of the vehicles, and data collection tools.

IFAW also provides operational support through compilation and sharing of information to assist in patrols, mentoring and capacity building for the rangers.

With wildlife spending more than 70 per cent of their time outside the protected Amboseli National Park, the OCWR patrol the 147,000-hectare community lands to safeguard wildlife and dissuade and mitigate human wildlife conflict amongst other security threats to wildlife and people.