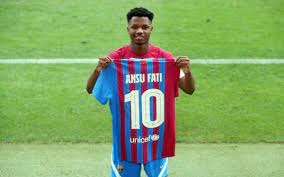 Ansu Fati has been handed Lionel Messi’s No 10 shirt at Barcelona after the Argentine left the Nou Camp for Paris Saint-Germain this summer.

The 18-year-old, a product of the club’s famed La Masia academy, has been out of action since November 2020 after suffering a ruptured meniscus in a win over Real Betis but will take over the iconic jersey upon his return after financial issues prevented Barca from handing Messi a new contract.

Fati, seen as one of the most exciting young prospects in world football, made his debut for Barcelona in August 2019 and became the youngest player to score in La Liga for the club a week later in the 2-2 draw at Osasuna.

Saul Niguez came through the youth academy at Atletico and will be allowed to leave this summer despite being part of Diego Simeones title-winning side last season; Manchester United have also been watching the midfielder

“Ansu Fati has a new shirt number,” a Barcelona statement said. “After wearing the number 22 then 17, the young Barca striker will proudly wear the number 10 shirt – a famous jersey previously worn by legends such as Leo Messi, Ronaldinho and Rivaldo.

“Despite being just 18 years of age and still recovering from injury, Ansu Fati forms part of Barca’s history as a record breaker and also with the Spanish national side.

“Since his debut in August 2019, the youngster has set records in the league and Champions League. Just six days after his debut for the first team he became the youngest ever player to score in the league for FC Barcelona.

Messi was set to extend his 21-year stay at Barcelona by signing a new five-year deal this summer, but the club announced in early August that “financial and structural obstacles” meant the contract could not be fulfilled.

Instead, the 34-year-old signed a two-year contract – with an option for a third – worth £25m per year after tax, plus bonuses at PSG.

He made his debut for the Ligue 1 side on Sunday as Kylian Mbappe scored twice to give the capital club a 2-0 victory at Stade de Reims.