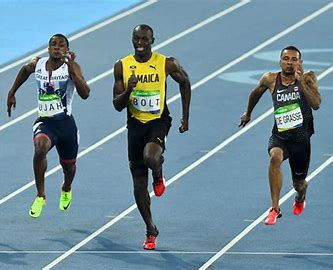 In the past three weeks or so, the fastest sprinters on the planet came together at the Tokyo Olympics to compete for the gold in the 100-metre dash.

Lamont Marcell Jacobs crossed the finish line in 9.80 seconds to bring Italy its first gold in the event. In the women’s race, Jamaica won the gold, silver and bronze – a clean sweep led by Elaine Thompson-Herah, who smashed through a 33-year-old Olympic women’s record with a time of 10.61 seconds.

But neither of them could touch the legacy of Jamaica’s eight-time Olympic gold medallist Usain Bolt, who retired in 2017 but still boasts the title of fastest human alive. Bolt ran the 100 metres in 9.58 seconds. Maxing out at about 27 miles per hour, that’s just under the top speed of a house cat – yes, a house cat.

In a race against cheetahs and pronghorns, the fastest animals in the world, Bolt wouldn’t stand a chance.

You might think how fast an animal can go depends on the size of its muscles: more strength, more speed. While that’s true to a certain extent, an elephant will never outrun a gazelle. So, what really determines maximum speed?

Recently, a group of scientists led by biomechanist Michael Günther, then affiliated with the University of Stuttgart, set out to determine the laws of nature that govern maximum running speeds in the animal kingdom. In a new study published last week in the Journal of Theoretical Biology, they present a complex model factoring in size, leg length, muscle density, and more to discover which body design elements are the most important for optimising speed.

This research provides insight into the biological evolution of legged animals and their corresponding gaits, and it could be used by ecologists to understand how speed constraints on animal movement inform population, habitat selection, and community dynamics in different species.

For roboticists and biomedical engineers, learning about nature’s optimal body structures for speed could further improve the designs of bipedal walking machines and prosthetics.

“It’s about understanding the reasons for evolution, and why and how it shapes the body,” Günther says of the project’s goal. “If you ask this question mechanistically, then you can really add to the understanding of how body design is shaped by evolutionary requirements—for example, being fast.”

Previous work in this area, led by Myriam Hirt of the German Centre for Integrative Biodiversity Research, found that the key to speed had to do with an animal’s metabolism, the process by which the body converts nutrients into fuel, a finite amount of which is stored in the muscle fibres for use when sprinting.

Hirt’s team found that larger animals run out of this fuel more quickly than smaller animals do, because it takes them more time to accelerate their heavier bodies. This is known as muscle fatigue. It explains why, theoretically, a human could have outrun a Tyrannosaurus rex.

But Günther and his colleagues were sceptical. “I thought we might be able to give another explanation,” he says, one that used only the principles of classical physics to explain speed constraints. So, they built a biomechanical model consisting of over 40 different parameters relating to body design, the geometry of running, and the balance of competing forces acting on the body.

“The basic idea is that two things limit maximum speed,” says Robert Rockenfeller, a mathematician at the University of Koblenz-Landau who co-authored the study. The first is air resistance, or drag, the opposing force acting on each leg as it tries to push the body forward.

Since the effects of drag don’t increase with mass, it’s the dominating factor capping speed in smaller animals. “If you were infinitely heavy, you would run infinitely fast, according to air drag,” Rockenfeller says.

The second property at play, which does increase with greater mass, is called inertia, the resistance of an object to accelerate from a state of rest. When running, Rockenfeller says, there is a time limit for an animal to accelerate its own mass: It’s the duration between midstance, when the foot is flat on the ground, to lift-off, when the foot leaves the ground. This is especially limiting for larger animals – with more mass to push forward, it’s harder to overcome inertia. So smaller bodies have the advantage here.

According to the team’s results, the sweet spot for overcoming air drag and inertia lies at around 110 pounds. Not coincidentally, that’s the average weight of both cheetahs and pronghorns.

Günther’s team was also able to predict theoretical speed maximums for different body designs at 100 kilograms, or about 220 pounds. A house cat this size could run up to 46 miles per hour; a giant spider, if its legs could somehow sustain its weight, would top out at 35 miles per hour.

Unsurprisingly, the average human body design comes in last place here: At 100 kilogrammes, we can only reach about 24 miles per hour.

But body size isn’t the only feature that comes into play when maximising speed. In the model, leg length also mattered. Animals with longer legs are able to push their bodies farther forward before their foot must leave the ground, prolonging the time they have to accelerate between midstance and lift-off.

As for why four-legged animals can run faster than humans, Günther says this isn’t because we only have two legs, but because our torsos are positioned upright and feel the full force of gravity. Bipedal creatures have evolved with much more rigid spinal structures to prioritise balance and stability over speed.

Animals whose trunks are parallel to the ground, however, evolved with more flexible spines that are optimized for prolonged foot contact with the earth.

But what about muscle fatigue? “It doesn’t play any role,” Günther says. One part of their analysis concluded that any animal can accelerate to at least 90 per cent of its maximum speed before running out of fuel.

Hirt did not respond to an emailed interview request about this result.

Carl Cloyed, an ecologist at Alabama’s Dauphin Island Sea Lab who studies animal locomotion, observes that from an evolutionary viewpoint, a biomechanical explanation makes more sense than the muscle running out of fuel. “I would expect organisms to have adapted to overcome that,” he says, but he concedes that it’s going to require more experimental research to back up the new model.

Günther and Rockenfeller agree that experiments are needed to verify their conclusions, and they feel they have presented a comprehensive model for other researchers to test in the future. But all of the scientists note that doing so will be a challenge.

Cloyed says it would require catching animals and observing them in a laboratory, or using high-quality videos of them sprinting, to analyse the biomechanics of their movements. The most accurate way to study running behaviour in animals would be to implant mechanical sensors inside their muscles and track them as they move in their natural environment, but this raises obvious logistical challenges and ethical concerns, Günther says.

Cloyed also looks forward to seeing how this analysis will be expanded, particularly to other locomotive modes like flying and swimming. “If this explanation holds up, it should also be true in other environmental mediums,” he says.

So will anyone ever beat Usain Bolt’s record? Probably, but we won’t get much faster than that. The biomechanics of sprinting show that we are already approaching the limit of what is possible for human bodies. And when someone new becomes the fastest person on the planet, they’ll have to resign themselves to holding that title only among humans. In the animal kingdom, we’re nothing special.