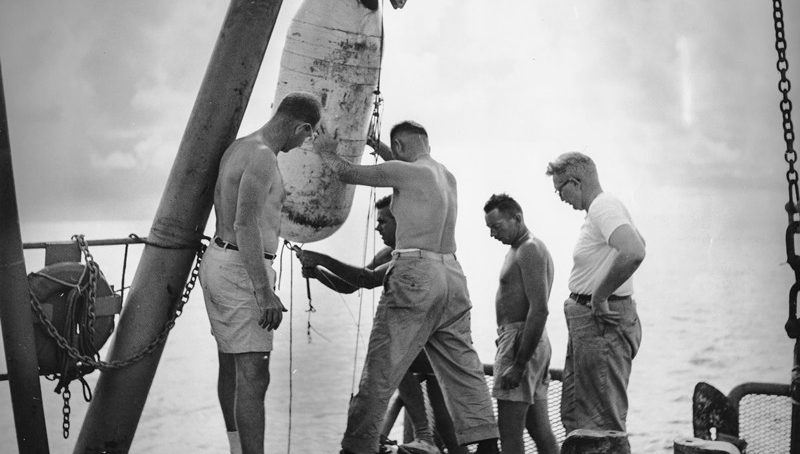 These two statements are uncontroversial: the path of science is more or less determined by the educated curiosity of scientists; the funding of science is sometimes based on condition of usefulness. So, does usefulness affect science’s path? Sometimes it does, especially when the funder has skin in the game.

Historian of science Naomi Oreskes has studied how the fossil-fuel industry adopted tobacco’s malign tactics. Now, in Science on a Mission, she focuses on the complexities of research driven by the military, as part of historians’ concern with how the US government’s enormous investments after the Second World War might have changed science. She offers case histories from oceanography, although many of her insights extend to multiple fields.

In the years before, during and after the Second World War, US oceanography was focused at the Scripps Institution of Oceanography in La Jolla, California; the Woods Hole Oceanographic Institution in Massachusetts; and the Lamont Geological Observatory in Palisades, New York.

These centres of excellent individual research were funded almost entirely by the US Navy. What difference did that make to what science they did or did not do? “The short answer,” writes Oreskes, “is: a lot.”

The Navy funded research into underwater acoustics, ocean temperatures and densities and sea-floor maps, so its submarines could communicate, navigate and hide from and find the enemy. The Navy supplied the questions, but didn’t care what answers the oceanographers found. They were free to follow where the science led. Nevertheless, Oreskes argues, the mere fact of having a military mission affected scientists’ sense of autonomy, and resulted in them neglecting certain areas.

One strong driver was dislike of military associations. At Scripps and Woods Hole, in the 1930s and 1960s, respectively, groups of scientists strenuously objected to their institutions’ directors relying on defence money. Their worries were mostly generic – whether Navy funding would open them to charges of having found what the service wanted them to find – and came down to arguments about the purity of curiosity-driven research versus the suspect nature of applied research.

In neither situation did the scientists win. Scripps’s director eventually left; at Woods Hole, the concerned scientists did.

In another case, the science was delayed: in 1964, the Navy began funding the deep submersible Alvin as a salvage and listening system. Not until 1974, when the cash began running out and the US National Science Foundation and the National Oceanic and Atmospheric Administration (both funders of curiosity-driven research) kicked in money, was Alvin freed to pursue the spectacular observations of deep-sea vents that led to understanding of extremophiles.

Oreskes’s most complex and lengthy case study began with the Navy’s need to understand ocean circulation. Research at Woods Hole, particularly by Henry Stommel, led to the discovery of the thermocline, the zone between the upper, warm ocean and the cold abyss, in which temperature drops and density and salinity rise, affecting how sound travels. Navy funding enabled Stommel to develop the thermohaline circulation model, a theory that changes in temperature, density and salinity drive circulation.

The money also led Maurice Ewing and Joe Worzel to discover the sound channel, a sort of underwater acoustic highway along which sound travels faster – and related shadow zones, in which it hardly travels at all. These features allow submarines to hide or communicate. The Navy’s needs and oceanographers’ curiosity coincided in a fundamental discovery about how oceans move.

But ocean acoustics had other implications, too. In these cases, some fields flourished while others starved. Sound travels more slowly in cold water than in warm, and in 1979, Walter Munk at Scripps and Carl Wunsch at the Massachusetts Institute of Technology in Cambridge realised that by measuring the speed of sound in the ocean, they were also measuring the ocean’s temperature.

Given that oceans cover more than half of Earth, measurements of ocean acoustics and temperature would be an excellent indicator of global warming.

In 1993, the Navy began a programme to set off undersea bangs, time their arrival at a distant point, and infer the water temperature along the way. Unfortunately, the scientists involved publicly and professionally downplayed the possibility that explosive sounds could affect marine animals such as whales. The programme became a long-running political, media and public-relations nightmare that was finally killed off a decade after it began.

Science on a Mission is what you want in a history: interesting research, stories with context and multiple points of view, clearly and compellingly written. But Oreskes’s case that the Navy’s mission affected the path of oceanography feels oddly incomplete. As she says, proving it would require an impossible comparison of two paths: one driven by scientific curiosity and the other by Navy funding. She also conflates military-driven science with mission-driven science.

Is the reader meant to infer that the same scientific neglect or swerve applies to civilian missions, such as fighting climate change or developing a Covid-19 vaccine?

Another is a stigma attached to working for the military. Sometimes these values might be extrapolated to the science itself, and military, applied, mission-driven science is seen as less credible. I wonder if I am meant to distrust the oceanography done with Navy funding – a qualm that is inevitable, although maybe the subject of a different book entirely.