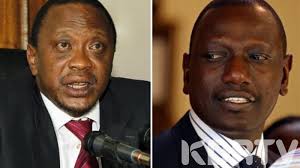 With no elections at stake to lose, Kenya President Uhuru Kenyatta has trained his eyes on cartels in the energy industry said to be fleecing consumers through hefty electricity and fuel rates. His targets, Deputy President William Ruto and allies have been on the receiving for end allegedly fronting companies that have been exploiting consumers.

Energy has become a hot potato no public official is willing to handle.

Recent decisions by the president, though, among them making Kenya Power a “state project”, have elicited questions about President Kenyatta’s personal and family interests in the sector. This was after a taskforce he formed six months ago blamed Ruto and allies for the irregularities that led to ‘abnormally’ high power tariffs.

The latter responded in kind, accusing the president, his family and allies of being responsible for the strain the economy is experiencing through current high cost of power.

Other than fossil-based fuel, Kenya has invested massively in the thermal, solar and wind energy as alternative energy sources. However, the investors have always been anonymous, hence the ping pong about culpability.

Documents sourced from various government departments in the ministry of energy and office of the president point to a blackhole the president – even with the help of multiple taskforces – will be hard-placed to put a finger on culprits, some described by Kikuyu MP Kimani Ichungwa as his relatives and kitchen cabinet.

“How does a listed public company become a state project? If you wanted a definition of state capture, that is the first definition of state capture. Before you make KPLC (Kenya Power) a state project you must first disclose to Kenyans, who are the largest private equity holders in KPLC. Two, disclose to Kenyans, without the game of musical chairs of forming committees and taskforces to deal with Independent Power Producers (IPPs). Tell us who are the owners of all those IPPs that have been extorting money from KPLC and Kenyans. After you have done that, you will be able to convince us that you are solving a problem. Otherwise, you are just taking us for a ride and you think we do not know what you are up to. And that kind of state capture is what as destroyed our economy,” Ichungwa says in an audio clip that has since gone viral.

The ministry has become focal point as Kenyatta grapples with how he will reset tanking economy. The ministry of energy controls over a Ksh300 billion budget, the fourth largest after the ministries of education, defence and health. The ministry also houses mining and minerals portfolios. However, the big budget has failed to translate to stability and affordable power supply, which in turn has adversely affected agriculture, transport and manufacturing sectors.

When he came to power in 2013, Kenyatta inherited a roaring economy from his predecessor Mwai Kibaki. Nine years down the line, the economy has virtually collapsed and unemployment is at its highest in more than three decades, according to the national Berea of statistics.

The focus on the energy sector, therefore comes as no surprise to Kenyans as the president struggles inject dynamism in the economy.

This was after the government forked out over Ksh28 billion to pay an Italian company for the construction of the Lake Turkana Wind Power project. In recent months, Kenyatta shifted blame to the energy sector for the wobbling economy.

While the president blames unnamed people in the ministry, questions have also been raised about government officials in his office who allegedly arm-twisted LTWP investor to turn over the construction of a 450-kilometre power transmission line to a Kenyan company. The transmission line connects to the national grid at Suswa Geothermal Plant in Nakuru.

Following our expose on how senior civil servants in the presidency connive to fleece electricity and fuel consumers, a senior staffer at the ministry sought to lay blame at the office of the president.

In a rejoinder, the staffer, explained, “LTWP was a BOOT (build, own, operate, transfer) project. KETRACO (Kenya Electricity Transmission Company Limited) was formed in 2008. LTWP proposal was to build the wind plant and the transmission line and recoup from wheeling fee in case any other power source was evacuated onto the line.”

The officer initially contested the authenticity of our report. “The article (Tell’s) is based on hearsay and is factually incorrect. The big question the article should have answered is: why a was the private investor’s proposal to build a transmission line get transferred to GoK (government of Kenya)? And who made the decision? There is a lot we just do not know and that is why I said, God help this country.”

Tell’s earlier story was anchored on circulars batted between the various offices and departments in the office of the president and the ministry of energy, which the officer acknowledged were genuine, therefore not hearsay.

Indeed, Keter in a letter to Head of Public Service Joseph Kinyua and SCAC secretary Wanjiku Wakogi acknowledged the “reputational” crisis the ministry had suffered as a result of corruption. The letter was a reply to concerns raised about the manner in which Electricity and Petroleum Regulatory Authority (EPRA) Director General Daniel Kiptoo was tapped from the agency’s board.

In a letter to the cabinet secretary and the chairman of the regulatory board, retired Justice Jacktone Boma Ojwang, Ms Wakogi questioned the integrity and professionalism of the hiring process. This is despite Attorney General Paul Kihara Kariuki giving the all clear to the board. All in government agree Justice Kihara erred in judgement.

Wakogi was responding to Keter’s letter, which said, “As you know, the authority has been dogged by systemic and endemic challenges in management that resulted in court cases and reputational damage to the Authority. Upon the arrest of the previous Director General of the Board in consultation with us resolved to tap Mr Kiptoo from the ministry to act in the position.”

Former director general Pavel Oimeke was arrested and arraigned in court on allegations of demanding a Ksh200,000 to approve the reopening a petrol station in Nairobi. Consequently, the government terminated his contract, creating a void that is now a bone of contention between the office of the president and the ministry of energy.

The appointment raised eyebrows given that Mr Kiptoo was a member of EPRA Board that oversights the activities of the state agency that vested with the power to control fuel and electricity costing. Kiptoo was, according the correspondence in our possession, an interested party and therefore not qualified to head the agency.

Wakogi points out that the factors that may have justified Kiptoo’s appointment in acting capacity disqualified him for a substantive appointment. In doing so, she wrote, it may be perceived as “direct movement of a board member from the boardroom to the shopfloor.”

In addition, it constitutes “grievous conflict of interest where board members interview one of their number for a privileged executive.” The letter also said Kiptoo’s appointment was in violation of the procedure as it constituted, “unfair employment practice where the other candidates for the post of chief executive officer are not availed (sic) to compete for the position since the interview panel (board) is an interested party.”

In response, the chairman of the board, Prof Ojwang, a former judge, contends that no law or regulation was violated.

“Following his appointment in acting capacity as the Director General, his appointment as an alternative representing the principal secretary was vacated and a replacement from the ministry appointed. Therefore, as an alternate, Mr Kiptoo being a representative and not a sustentative member, he did noy espouse his position at the board but the position of the principal secretary.”

The chair also dismisses the perception of conflict interest, arguing that board members were guided by professionalism in making their decisions.