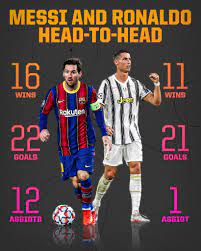 While there’s plenty of fanfare over Erling Haaland and Kylian Mbappe taking over at the top of the game, Lionel Messi and Cristiano Ronaldo are far from done yet.

Both with new teams (well half-new in Ronaldo’s case) the pair return to the world’s biggest stage in club sport this week, refreshed and ready to try and add to their European Cup tallies.

While Messi leads Ronaldo six to five in Ballon d’Or titles, Ronaldo has the edge in Champions League trophy wins, with five to his rival’s four, but the Argentine has his best chance in years to up his total.

Joining Sergio Ramos, Gianluigi Donnarumma, Achraf Hakimi and Gini Wijnaldum at PSG, Messi has been part of arguably the most blockbuster transfer window in the history of the game after leaving Barcelona.

The Parisians are now favourites to win the competition this season, but you’d be a fool to rule out Manchester United having a say, now Ronaldo has joined from Juventus.

He’s only been back for 90 minutes, but two goals in a match-winning display against Newcastle at the weekend gave off that ‘missing piece of the puzzle’ vibe.

Ronaldo will be determined as ever to make the difference in a winnable group starting with a clash against Young Boys which will be live on talkSPORT 2 on Tuesday.

For years, the pair battled one another domestically and on the European front when Ronaldo joined Real Madrid.

They went their separate ways in 2018 when Ronaldo left Spain for Italy, but they’ve still dominated Europe’s top competition. talkSPORT.com looks back at how they did it…

Ronaldo’s Champions League proper debut came in 2003 with Man United against Stuttgart, having already appeared in a qualifier a year earlier with Sporting Lisbon.

Sir Alex Ferguson’s side lost the group stage match 2-1 to Felix Magath’s Bundesliga table-toppers, but Ronaldo did win a penalty, providing the best moment of the game for his side.

Meanwhile, a long-haired Messi made his Champions League debut against Shakhtar Donetsk in 2004 in the No.30 shirt he now wears at PSG.

However, the night was far from his, with Shakhtar forward Julius Aghahowa easily stealing the headlines with a brace in a 2-0 win for the Ukrainians.

Ronaldo may be the competition’s record scorer with a gargantuan 134 goals, but you’ll be surprised to learn that he was a slow starter, taking 27 games and four years before he found the goal in Europe’s top tier.

The Real Madrid legend finally managed to score in United’s famous 7-1 quarter final rout of Roma in 2007 and was as relieved as he’s ever looked. The cork was out of the bottle, though, and a second soon followed in the same match.

Ronaldo’s incredible record 134 Champions League goals are even more unbelievable when you consider he didn’t score for four years.

During a 5-0 rout of Panathinaikos in 2005, the scruffy young Argentine capitalised on some embarrassing defending before dinking a loose ball over the keeper, which he then collected and tapped into the net.

Ronaldo and Messi first met in Europe during United’s 2008 win, with a single Paul Scholes goal separating the sides in an intense semi-final. And their next clash would be in Ronaldo’s last game for the Red Devils until this year’s return, with Messi’s iconic header in the 2009 final sealing the title for Barca in the Stadio Olimpico.

They had to wait until 2011 before meeting again, during the peak of Real Madrid and Barcelona’s rivalry, when Jose Mourinho and Pep Guardiola’s hate for each other boiled over. Messi went on to destroy the Madrid backline with an astonishing semi-final goal at the Bernabeu which helped put Guardiola’s treble-winning side in the history books.

Their last meeting game in 2020 during lockdown, with Ronaldo scoring twice from the spot.