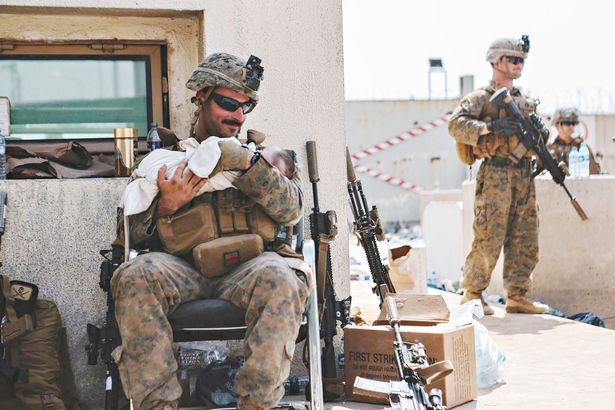 Tony Blair has slammed Joe Biden for the chaotic withdrawal from Afghanistan – 20 years after he took us to war. The former Labour PM said the President’s decision to sign off the pull-out of US and British troops was “imbecilic” and had left jihadists worldwide cheering.

Mr Blair tonight blasted the withdrawal of troops from Afghanistan as “imbecilic” and warned it will have “every Jihadist group round the world cheering”.

The ex-PM fired his broadside as Boris Johnson was making a desperate bid to maintain crumbling relations with the US over the decision signed off by President Joe Biden.

And it came as our paratroopers faced a race against time to evacuate British citizens in Kabul before the last flight home – set for as early as Tuesday.

In horrifying scenes today at least four Afghan women were crushed to death in a surge at the capital’s airport in 31C heat.

And news emerged of a British-educated Afghan who is leading a resistance force against the Taliban, claiming to have killed more than 100 as fears of a civil war loomed.

He urged Mr Johnson to use Britain’s position as head of the powerful G7 group to take tough action against the Taliban – and he slammed the US-led pull-out, drawn up by Donald Trump but ratified by Mr Biden who said he wanted to end “the forever wars”.

Mr Blair said: “The world is now uncertain of where the West stands because it is so obvious the decision to withdraw in this way was driven not by grand strategy but by politics. We didn’t need to do it. We chose to do it.

“We did it in obedience to an imbecilic political slogan about ending ‘the forever wars’, as if our engagement in 2021 was remotely comparable to our commitment 20 or even 10 years ago.” The former Labour PM said before the pull-out “troop numbers had declined to a minimum and no allied soldier had lost their life in combat for 18 months”.

Mr Blair said the terms of the February 2020 agreement to leave if the Taliban agreed to protect civilians and form a stable government had been violated on a daily basis.

“We did it with every jihadist group round the world cheering. Russia, China and Iran will see and take advantage,” he said.

“We need to draw up a list of incentives, sanctions, actions we can take – including to protect the civilian population – so the Taliban understand their actions will have consequences. This is urgent.

“The disarray of the past weeks needs to be replaced by something resembling coherence and with a plan that is credible and realistic.” Mr Blair went on to warn Britain faces becoming a “second-division” world power.

Video grab of a mobile footage shows Turkish soldiers guarding the Kabul Airport in Afghanistan pick up an Afghan children from the desperate crowd on the other side of the perimeter wall of the airport for them to be evacuated on August 21, 2021

Writing in a 2,700-word article on the threat of “radical Islam”, he added: “For Britain, out of Europe and suffering the end of the Afghanistan mission by our greatest ally with little or no consultation, we have serious reflection to do. We don’t see it yet, but we are at risk of relegation to the second division of global powers.”

Number 10 tonight denied reports of a rift between Mr Johnson and the US President.

A Downing Street source insisted the pair have a “good working relationship”. The insider said the PM had not criticised the US, and regards co-operation on Afghanistan as “vital”. Mr Johnson has called a virtual meeting of G7 leaders within days.

A senior Government source said: “The Prime Minister has been on the phone to world leaders every day this week, co-ordinating on evacuations and international action.

“We’ve doubled our humanitarian aid to Afghanistan and will be urging others to step up at next week’s G7 – we need a joined-up, UN-led process that protects Afghans and prevents a collapse into chaos. The US is critical to the international effort.”

Downing Street also denied there was a “false deadline of 31 August” for evacuations from Afghanistan.

It comes after Mr Biden said most American troops would be withdrawn from the beleaguered country at the end of the month.

There are fears thousands of Afghans will be left behind as the chaotic scramble to flee the Taliban gathered a frightening pace.

In the wake of a horrific crush at Kabul airport, British soldiers desperately shouted for medics and stretchers, as unconscious people were carried away.

Many had been pronounced dead and covered in white sheets. They are believed to include four Afghan women. Other paratroopers tried to pull people, including young children, from the chaos. Some sprayed the crowd with hoses to try to cool them down as medics frantically dashed between casualties. As many as 6,000 British nationals and locals are due to be evacuated. So far 12,000 foreigners and Afghans working for embassies and international aid groups have been flown out of Kabul.

He said: “We can’t leave the country because we can’t get into the airport without putting our lives at risk. I’m past angry, I’m past everything – I’m just completely numb at the incompetence of this operation.”

The US has told citizens not to go to the airport for security reasons without “individual instructions from a US government representative”. Huge crowds have descended on the airport over the last few days.

Nadene Ghouri, a volunteer who is trying to secure evacuation flights for Afghan nationals at risk, said many were being turned away even with an official flight place.