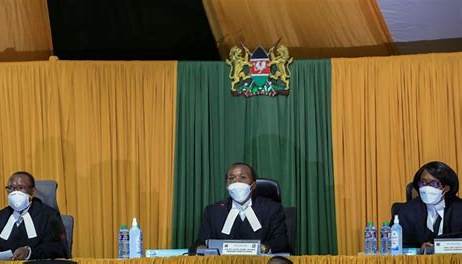 The sanctity of the Kenyan constitution was on trial when the Court of Appeal upheld an earlier verdict of the High Court, which consequently ended President Uhuru Kenyatta and opposition leader Raila Odinga’s quest to amend the constitution to expand executive in the name of national reconciliation and healing.

In a bold landmark ruling, the appellate court admonished President Kenyatta for clandestinely chipping away at the constitution and judiciary by initiating an amendment of the mother law through deceit and inducement of sections of the political class.

Significantly, the court upheld the High Court ruling that the president can sued for violations of the law while still in office.

Contrary to fears that some of the judges were perceived to be pliable by the executive, the seven judges were unanimous in their verdict, save for a few instances where Justice Fatuma Sichale, Hannah Okwenguh and Roseline Nambuye dissented.

The president and the opposition leader moved to the Court of Appeal to push through 74 amendments to the constitution, which had been struck out by the High Court following a petition by civil society groups and other ordinary citizens.

The judges observed that the intention of changing the constitution by the execution fell short of expectations. “It is improper to lump together 74 amendments and subject them to one referendum question,” Justice Musinga pointed out.

Odinga had earlier in the week announced that he would not challenge decision in the Supreme Court if the appellate court upheld the ruling of the High Court.

There was no immediate response from the president, who in addition, was criticised for using sweeteners such as increased funding for regional governments to fundamentally alter the structure, texture and context of the constitution.

More specifically, the president was accused of attempting to undermine the independence of the judiciary through the creation of the office of the ombudsman. The functions of the ombudsman would be parallel to that of the Judicial Service Commission that is headed by the Chief Justice.

Amani National Congress (ANC) Musalia Mudavadi accepted the verdict of the court and promised to “abide by the Court of Appeal ruling.”

“But now that a judgment as been rendered, we should all unanimously as a united focus on more pressing matters that crying out for attention. We cannot live a dream forever. At one point we must wake to reality n dove on,” Mudavadi, who has declared interest in the presidency in the 2022 elections said.

Although Kenya has never experienced a civil war or an uprising like nearly all its neighbouring countries and held elections regularly since independence in 1963, but its elections held every five years that are predictably violent and bloody as a result of deeply entrenched ethnic hostilities and regional loyalties.

The judges made the ruling against the backdrop of persistent executive interference by the executive, which often complaints about “judiciary activism” in reference to the rejection of the courts to pander to the whims of the president and senior government officials.

Other than Justice Musinga, the other members of the Bench were justices Roselyn Nambuye, Hannah Okwengu, Patrick Kiage, Gatembu Kairu, Fatuma Sichale and Francis Tuiyot.

The ringing verdict of the judgement was delivered by Justice Kiage, who said of the push to amend the constitution: “The days of an unaccountable president are long gone. The appeal on presidential immunity must fail,” Justice Kiage said.

The appellants had challenged the High Court ruling that the president is amenable to the law during the pendency of his presidency.

The seven judges repeatedly noted the ordinary people had been ignored. Justice Musinga said “participation of people must be done in a transparent manner” and that “the process of collecting signatures was not transparent and there was to proof of that. “Some of the amendments were sweeteners – more money to devolved governments…Public participation must be real, not illusory”

In the ruling that took 11 hours, the judges repeatedly criticised the elections body, Independent Electoral and Boundaries (IEBC) for failing to continuously register voters, failing to prove to the court that it conducted civic education, collection of the views and was not quorate required by law.

As a result, it has been barred from carrying out its mandate without meeting quorate requirements and conducting continuous voter registration as required by the constitution. The BBI was not any different from the National Accord that was signed between former President Mwai Kibaki and Raila Odinga, which created an avenue for formation of a government of national unity on the back of the disputed 2007 presidential election.

“BBI was an illegally entity created through an illegal means to perpetuate an illegal process,” said Justice Hannah Okwengu.

The court was making a ruling on an appeal filed by parties allied to President Kenyatta and former opposition leader Raila Odinga after the High Court in May quashed an attempt to amend the constitution to expand the executive in the guise of national healing and reconciliation.

The Court of Appeal upheld the verdict of the High Court, albeit with variations in the judgements, which put paid to the push for the creation of the posts of the prime minister, two deputy primes ministers, and expand the cabinet, among other changes that envisaged in the Building Bridges Initiative.

Kenya holds its next presidential poll in less than 11 months, and the two leaders had hoped that the appeal would enable them create more executive positions. Mr Kenyatta and Mr Odinga are sons of Kenya’s first president and vice president and in the past two decades have been involved in prolonged catfights for the reins of power, with Raila Odinga controversially losing to Kenyatta in the 2013 and 2017 elections.

However, from March 9, 2019, the two seem to have buried the hatchet and “hatched” a brotherhood that has seen the president side-line his number-two, Deputy President William Ruto and given the opposition leader more say in government.

Among the issues that were appealed through Members of Parliament Dennis Waweru (for Kenyatta) and Mohammed Junet (for Raila) included whether the president is suable while still in office. The petitioner also sought to establish whether the president can initiate and promote a constitutional amendment.

There were questions about who can initiate a popular constitutional amendment and the if BBI is in conformity with the constitution.

The electorate had also raised concerns about whether Constitution, promulgated in 2010, envisaged an omnibus bill or specific questions to be subjected to a referendum. In its judgement, the Court of Appeal observed, “I am in agreement with the HIGH Court that there is a legal requirement under Article 10 of the Constitution for voters to be supplied with adequate information to make informed decision. There was no evidence this was done,” said Justice Gatembu Kairu.

Justice Kairu went further and said that the electorate can only vote on a “single thematic topic” as opposed the Omnibus Bill as was cast as BBI, in which voter would have voted for a raft of amendments with consequence of reducing the Constitution to a mongrel document.