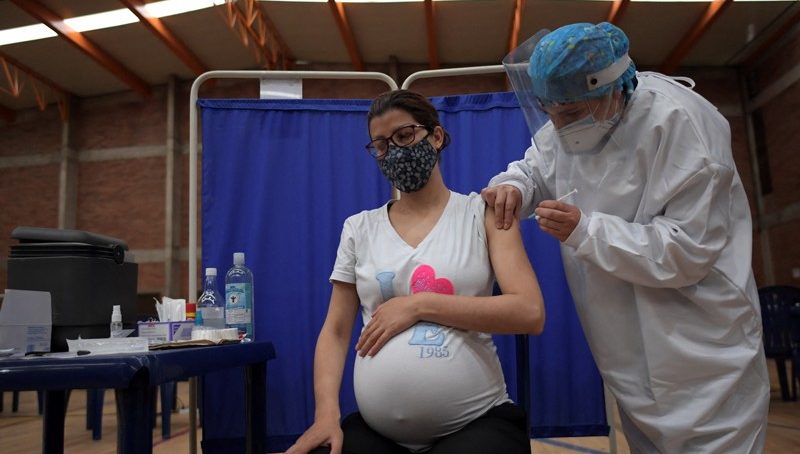 Covid-19 can strike hard and fast – especially when you are pregnant. Alison Cahill, a specialist in maternal-foetal medicine at the Dell Medical School in Austin, Texas, vividly remembers a patient from the first wave of the pandemic who was 26 weeks pregnant and woke up one morning with a cough.

Her condition declined so rapidly that she was admitted to hospital that evening. Within six hours, she had been transferred to the intensive-care unit (ICU), where she was sedated so that she could be placed on a heart-lung bypass machine.

Owing to safety precautions, her husband had to communicate with the medical team from the parking area.

“When she woke up and started to not feel very well, I don’t think it was within her wildest dreams that by the next morning she would be sedated and by herself in an ICU,” Cahill says. The woman spent a few weeks in the unit before she was finally able to go home.

Health-care professionals were still sharing similar gut-wrenching stories when the Delta variant of the coronavirus SARS-CoV-2 hit the United States. Cahill’s hospital, for example, was flooded with so many people who rapidly became ill with Covid-19 that the staff had to convert other floors into extra ICUs. But there was one stark difference: Covid-19 vaccines were now readily available. And all of Cahill’s critically ill pregnant patients had refused one.

When the vaccines were first administered to the public in late 2020, little was known about their effect on pregnant people, who hadn’t been represented in the original clinical trials that tested the shots. Although that is standard practice, it left pregnant people grappling with whether getting a jab was the best decision for themselves and their babies.

But the data are now solid. They show that the risks of Covid-19 during pregnancy – including maternal death, stillbirth and premature delivery – far outweigh the risks of being vaccinated. And yet, according to data from the US Centers for Disease Control and Prevention (CDC), only around 40  per cent of pregnant people in the United States had been vaccinated against Covid-19 by January 1, 2022.

The numbers are similarly low across the globe – causing sick pregnant people to turn up at hospitals, and healthcare workers to struggle to find solutions.

Whether Covid-19 poses a substantial risk during pregnancy was never in doubt. A pregnant person’s body will suppress certain parts of the immune system to tolerate a foetus. Their blood volume also expands dramatically, straining the cardiovascular system. And the growing uterus pushes up on the diaphragm, reducing lung capacity.

“Then you take a viral illness that is potentially life threatening – one that affects the lungs and the cardiovascular system – and you have the perfect storm,” says Andrea Edlow, a maternal-foetal medicine specialist at Harvard Medical School and Massachusetts General Hospital in Boston.

But the precise danger remained an open question until scientists could quantify it. In August 2021, a study1 reviewed data from close to 870,000 women who gave birth at nearly 500 US medical centres between March 1, 2020 and February 28, 2021.

The known risk, along with data demonstrating the vaccines’ general safety, helped to nudge the CDC to change its tune on August 11 – recommending that pregnant people receive a vaccine.

Previously, the agency had simply advised that people at high risk of serious disease make the decision with the help of a physician.

The World Health Organization had recommended vaccines for the pregnant people at highest risk in June.

The change in guidelines came at a time when the Delta variant had changed the game: it caused an uptick in cases everywhere, but also an increase in the severity of illness among pregnant people. In October, for example, nearly 20 per cent of the people most critically ill with Covid-19 in hospitals in England were unvaccinated pregnant women.

And a second CDC report found that under the same conditions, the risk of maternal mortality was increased fivefold.

“If anything, Covid-19 is only becoming more deadly for the mother and the foetus,” Edlow says. (However, it’s not yet clear whether the Omicron SARS-CoV-2 variant, which emerged in November, has a similar impact.) By the end of 2021, more than 25,000 pregnant women in the United States had been admitted to hospital with the disease, and more than 250 had died.

The increased risk encouraged more pregnant people (albeit a small percentage of the total population) to get inoculated when vaccines were available to them – allowing monitoring systems around the globe to catch information about vaccination during pregnancy.

One study published in June 2021 looked at adverse outcomes – pregnancy loss, including miscarriage and stillbirth, and neonatal outcomes such as premature birth, congenital disabilities and death — among 827 people in the United States who gave birth after receiving a Covid-19 vaccine.

It found that they reported such events at a similar rate to people who gave birth before the pandemic (and had therefore not received a vaccine). And a study posted as a preprint in August5 looked at nearly 2,500 people who had received a Covid-19 vaccine either before conception or during the first 20 weeks of pregnancy, and found no increased risk of miscarriage.

Data have continued to pile up – showing that the vaccine is not only safe during pregnancy, but also effective. A study published in October, for example, found that after the second dose of a vaccine, pregnant people mount a potent defence against the virus.

A bonus is that the vaccines might even protect the baby. Several studies published in the middle of last year suggested that antibodies generated in response to a Covid-19 vaccine are transferred through the placenta. That could confer immunity to the new-born, who is particularly vulnerable during the first few months of life and won’t be eligible for a vaccine for some time.

Although research on this subject is still scarce, Edlow’s team reported in a November preprint that antibodies persisted at six months of age in 60 per cent of infants whose mothers were immunized against Covid-19 during pregnancy.

“I can’t think of a better way to protect these babies once they’re out in the world and potentially introduced to the Covid virus,” says Jennifer Jolley, a maternal-foetal medicine specialist at the University of California, Irvine Medical Center.

And yet inoculation rates among pregnant people are drastically low around the world. Not only are they below 50 per cent in the United States, but an October meta-analysis found12 that only 19 per cent of pregnant people in Africa intend to receive a Covid-19 vaccine.

Oceania has the highest intended uptake among pregnant people of any global region, with only 48 per cent.

“It’s getting increasingly hard to move the needle on this and increase those vaccination rates,” says Sascha Ellington, an epidemiologist who leads the emergency-preparedness response team in the division of reproductive health at the CDC in Atlanta, Georgia.

Even before Covid-19, vaccine hesitancy during pregnancy was a known challenge. Before the H1N1 influenza pandemic that began in 2009, seasonal uptake of influenza vaccines among pregnant people in the United States hovered around 27 per cent.

But targeted strategies, such as an obstetrician recommending a shot or administering one during a prenatal appointment, helped that to rise to 61 per cent during the 2019-20 flu season – a figure comparable with that in the general adult population.

Many experts are hopeful that similar efforts will work for the Covid-19 vaccine. But the pandemic presents an entirely new challenge. That’s in part due to the increasing power of social media to propagate misinformation, and the fact that differences in vaccine uptake have fallen along political lines.

“It’s a steeper uphill climb than ever before,” Edlow says. But it’s an important one. “It really is a matter of life or death.”