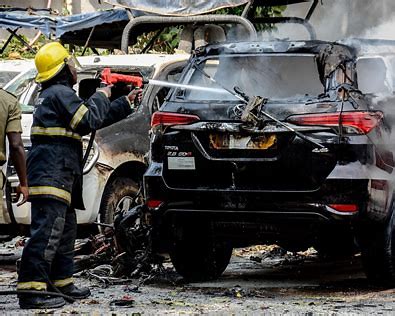 Armed police and soldiers patrolled the Ugandan capital on Wednesday and Thursday as security was stepped up following twin suicide bombings claimed by the Islamic State that killed three people in the heart of Kampala.

Ugandans have been urged to remain on high alert after Tuesday’s attacks, the latest in a string of bombings targeting the East African nation.

Checkpoints have been set up on several roads in Kampala, while the areas where the two bombings occurred have been closed off to motorists as teams of investigators scour the blast sites.

“Security has been stepped up in and around Kampala to ensure the public is safe from any possible dangers,” Kampala Metropolitan police spokesman Luke Owoyesigyire said. “We encourage the public to remain on high alert as threats are real and high.”

Tuesday’s attacks occurred within minutes of each other, with two suicide bombers on motorcycles disguised as local “boda boda” motorcycle taxi riders detonating a device near Parliament, while a third attacker targeted a checkpoint near the Central Police Station. Several dozen people were injured, many of them police.

“I did not go to work in the market today because of the attacks yesterday,” 31-year-old mother of two Sylvia Nabukeera, who works in Kampala’s commercial hub of Kikuubo, said in an interview. “I have temporarily suspended work to take care of my kids until it is safe to go to work,” she added.

The bombings, which police had said were the work of “domestic terrorists” linked to the Allied Democratic Forces (ADF), an armed group active in eastern Democratic Republic of Congo, followed two attacks last month, which Uganda also blamed on ADF.

Investigations were ongoing, with police in pursuit of suspects, after foiling a third bombing on Tuesday and shooting dead the attacker.

Ugandan police last month arrested a number of alleged ADF operatives and warned that extremists were believed to be plotting a new attack on “major installations”.

The arrests followed two blasts last month – a bus explosion near Kampala that wounded many people and a bombing at a roadside eatery in the capital that killed one woman.

Uganda has also blamed the group for a foiled bomb attack in August on the funeral of an army commander who led a major offensive against Al-Shabaab militants in Somalia.

Washington in March this year linked the ADF to IS, which in April 2019 began to claim some ADF attacks on social media, presenting the group as its regional branch – the Islamic State Central Africa Province, or ISCAP.

The ADF, historically a Ugandan rebel group, has been accused of killing thousands of civilians in eastern DRC.

“It’s increasingly clear that the ADF is refocusing its attention on Uganda,” said Kristof Titeca, an expert on the group at the University of Antwerp.

“It may link with an increased influence of jihadist elements within the ADF in the last couple of years,” he told AFP.

The ADF is considered by experts to be the bloodiest of more than 120 armed groups that roam eastern DRC, many of them a legacy of two regional wars a quarter of a century ago.

The attack was seen as revenge for Uganda sending troops to Somalia as part of an African Union mission to confront Al-Shabaab.