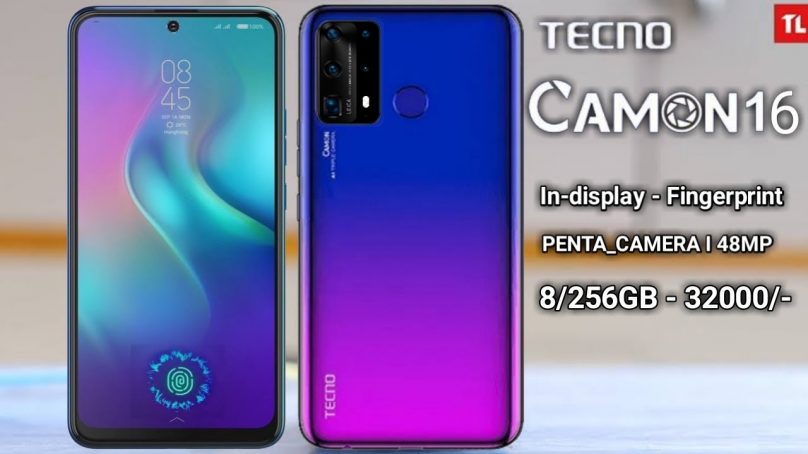 As smartphones are becoming increasingly integrated into our everyday lives, it is essential to choose one that fits your lifestyles and your needs.

Every mobile phone brand is trying to stand out from the rest by upgrading their technology and introducing new functions; however, the best way to measure their value is through their performance side by side. Today, we have selected three android phones for comparison: the Tecno Camon 16 Premier, Huawei Y9 (2019) and Samsung A41.

While the three phones consider the different needs of users, they differ quite a lot when it comes to design. Tecno focused on the user’s convenience and has shifted its fingerprint scanner to the side so that it will be easier to gain access to the phone. This was a good move on Tecno’s part as it was a concern when we tested Huawei’s Y9 (2019) that was rear-mounted. This stopped me from unlocking the phone accidentally every time my fingers brushed the scanner.

The Camon 16 Premier also opens faster and is extremely convenient to do so, so much so that it felt intuitive after a while. The unlocking time of Camon 16 Premier is less than a second, and this is a marked improvement from even their own Camon 15. This allows users to save time over minute actions, making the Samsung A41 and Huawei Y9 (2019) appear inferior.

It seems that Tecno has done a lot of user research on this aspect, and the attention to detail made us feel very good about the Camon 16 Premier.

In terms of screen size, which is a crucial consideration for users today, the Techno Camon 16 Premier takes the lead with its display with over 6.85” of high-resolution screen while 6.53FHD hole screen on Samsung A41 and 6.59” FHD notch on Huawei Y9 (2019). This is the real estate for users to watch their favourite TV shows or make video calls, users can enjoy greater visual details. The bigger screen is more comfortable to watch for extended periods, allowing users more considerable viewing time before getting tired.

The Camon 16 truly shines when users watch their favourite high-resolution videos. The widescreen works in perfect sync with the 90Hz ultra-clear resolution, so users do not have to strain their eyes to enjoy a high-quality viewing experience.

The camera qualities of a phone have become a clear determining factor for users when it comes to buying a phone. After much consideration, the Tecno Camon 16 Premier once again stands out with their ultra-clear visuals that reflect what you see with your eyes. It boasts a 64MP ultra quad-camera while the Huawei Y9 (2019) only has a rear camera of 13MP.

The Samsung A41 comes a little closer with a 48MP triple rear camera and a panorama function but still shy of the quality that CAMON 16 Premier can produce.

Tecno Camon series has always been notable for its superior camera and photography capabilities. They put the user’s needs first and develop technology around that, bringing the user an unprecedented clear photography experience. Each camera lens has its mission and an outstanding feature, genuinely living up to their expectations that each picture could be a masterpiece. Based on the MTK flagship-level G90T core chip, the CAMON 16 Premier supports 64MP full-size output. As we understand, this is an industry-first, and not many phones can compete with this configuration. With five rear flashes, the user can get clear and bright photos regardless of the darkness of their environment.

Clear photos will always be a priority when shooting. Tecno Camon 16 Premier uses the Super Hybrid Video Anti-Shake (Super HIS) to stabilize and has produced fantastic photography results. Another advantage is that it supports 960 frames of super slow-motion shooting, thus expanding the potential of video shooting exponentially. The Camon 16 Premier’s 8Gb of RAM also helps tremendously in accelerating the video processing time.

It seems to us that the Tecno Camon 16 Premier is not merely a phone but a professional camera integrated with many other easy-to-use phone functions. These functions ensure the users get the best photo quality everywhere, every time. It is impressive that TECNO managed to fit something of this quality into a mobile phone.

Battery life is a significant feature that determines how long your phone can last while you complete your tasks. The Tecno Camon 16 Premier has a 4500mAh battery and a quick charge of up to 70% in just 30 minutes. This is an upgrade compared to the smaller 4000mAh and 3500mAh capacity of Huawei Y9 (2019) and Samsung A41.

Furthermore, the user’s safety is Tecno’s priority as Camo 16 Premier comes with its newest safety features. Tecno has engineered the Camon 16 to reduce overheating during fast-charge and lowered the surface temperature by two degrees. It does this while simultaneously offering two types of charging options as CAMON 16 Premier has managed to even add a Type-C fast charging capability inside its lithe frame.

This is complemented with another safety function that automatically shuts the phone down when the battery is fully charged. This is a breakthrough in the industry, TECNO has integrated into the CAMON 16 Premier to better protect the mobile phone and the user.

One critical measure of a good smartphone is how they approach new technology. In this aspect, Tecno’s Camon 16 Premier is already off to a strong start with its unique AR Graffiti function that Huawei Y9 (2019) and Samsung A41 do not have. This new function gives users the ability to unleash their creativity digitally and re-imagine their surroundings. The AR Graffiti function has countless brushes and unlimited colours that you can use to customize your photos. This took us by surprise because it is something refreshing on the market and also, we had a lot of fun playing around with this technology.

To make it even better, Tecno Camon 16 Premier also has other complimentary AR features. AR Sticker and AR Emoji, for example, allows users to interact in many creative ways. The features will enable you to capture any expression you want with over 200 facial features available. This technology also includes light beautification and localization features to make sure you look your best, even in AR. We know AR in smartphones is still an experimental technology, but if this is the direction that it is going to be in the future, then we think the Camon 16 Premier will become popular very fast.

After reviewing so many functions, the clear winner amongst these three phones is clearly Tecno’s Camon 16 Premier. Tecno has not only continually integrated advanced technologies into their products, but also makes sure they are an economical product. The Camon 16 Premier offers outstanding value for money, which is only one of the many other benefits that this phone offers.