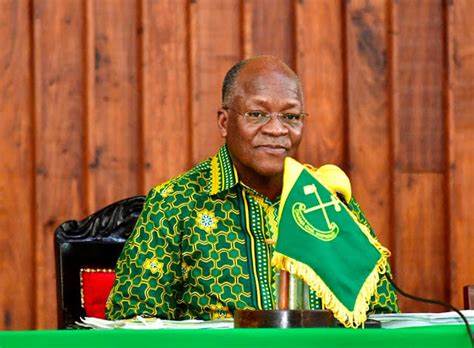 For two weeks, the fallen president’s health and whereabouts have been the subject of speculation until Wednesday night, when a sombre Vice President Suluhu Samia Hassan appeared on national Tanzania Broadcasting Corporation (TBC) Television to deliver the news.

The news, however, did not come as a surprise as some social media users had already concluded that the president was not more and the state was buying time as rumours swirled about intense jostling and coveting for his seat. The delay, whether enforced or deliberate, remains a subject of intense speculation and it is likely to ramp up pressure during the expected reorganisation of the government.

The Tanzanian constitution gives the mandate to the vice president in the event the president is unable to discharge his mandate mid-term by way of resignation, indisposition or death. Since independence in 1961, Tanzania had never experienced a situation where a sitting president die.

The VP, who hails from Zanzibar will become the country’s first woman president and the second from semi-autonomous archipelago after President Ali Hassan Mwinyi. Ms Hassan will assume office at a time Tanzania economy was beginning to pick momentum and its influence in the East African Community (EAC) bloc was equally growing as a result of Magufuli’s nationalistic and robust protection of local industries.

Outside Tanzania and the wider East Africa, the rest of Africa will be watching with interest if Tanzania, an overly patriarchal society, will accept a woman at the helm. Barring the unexpected, Suluhu Hassan is poised to become the fourth female president in Africa following in the footsteps of Liberia’s Ellen Johnson Sirleaf, Malawi’s Joyce Banda and Central African Republic’s Catherine Samba-Panza.

The unwritten rule in Tanzania politics is: if a president hails from the Island, the vice-president is picked from the mainland. Udini (religionism) also compels power to be shared between Christians and Muslims. However, demographics have sometimes infused radicalism in Tanzanian politics.

The mainland often argues the islands depend on Tanganyika, which produces more than 95 per cent of the resources and therefore deserves to hold onto all the instruments of power. The Islands have responded with demands for full autonomy.

The schism is said to have caused delays in announcing the death of Magufuli, with Prime Minister Majaliwa supported by Mainlanders, insisting that power transfer be resolved outside the constitution before the death was made public. The “palace” scuffling has also been reported by the international media and the opposition, to the chagrin of CCM, in power since independence.

Eventually, the palace coup Majaliwa and company had plotted aborted paving the way for the announcement.

According to the constitution the vice president assumes the presidency for the remainder of the five-year term, but there is already unease in the governing CCM in the wake of intense power struggle between pro-Suluhu Hassan and pro-Majaliwa factions.

The opposition led by Chadema’s presidential candidate Tundu Lissu suggest Magufuli may have died many days before the official announcement on Wednesday night. In a flurry of tweets from his exile in Norway, Lissu maintained that the president died of Covid-19 soon after he appeared last in public of February 27.

The vice-president, referencing medical reports, said the president died of heart complications he had not experienced for over a decade.

His sudden absence from the public for more than two weeks stirred speculation in and outside Tanzania, with renowned Ugandan journalist Charles Onyango-Obbo, quoting sources in Dar es Salaam, suggesting intense jostling in CCM over who should succeed the president.

Leaked information about the possible power struggle in the ruling party and between semi-autonomous Zanzibar and Mainland Tanzania (Tanganyika).

Obbo tweeted, “The Magufuli state is a master at information control. Not a squeak, no leaks from the palace about his illness leaving us to feed on speculation. Word is that both late Zanzibar First VP (Maalim Seif Sharif) Hamad (sic) and storied Minister (Augustine Philip) Mahiga were in Nairobi hospitals, and we totally missed it then.”

Then he followed with another telling tweet that alluded to palace wars and lobbying. He wrote, “Very sick Magufuli never left Tanzania, this report says. Reports he’s in Nairobi are a big disinformation coup by Tanzanian intelligence, and they are happy it has caught fire. A transition is reportedly underway. It’s going to be a long weekend!” that was last week.

Suluhu Hassan is a Zanzibari Muslim and a woman, she finds herself having to slug it out gender, regional and political chauvinists as the country comes to terms with Magufuli demise.

Weeks after the president’s health became a matter public interest and speculation, there reports a clique within CCM was pushing to change the constitution to force a fresh presidential election. According to Lissu, the power struggle was the reason there a delay in announcing the president’s death.

Magufuli’s demise was a remote possibility in the collective psyche of Tanzanians, with the ruling CCM top brass raising serious concerns about the suitability and steeliness to tamp down the greed and runaway appetite of the elite to amass wealth.

Tanzania discovered massive mineral deposits – with gold and tanzanite headlining the newfound wealth – during the reign of the third the president of the republic, Benjamin William Mkapa, who died in July last year, 15 years after he retired. In addition to natural gas, oil and coal, the scramble for Tanzania’s other natural resources includes diamonds, copper and iron.

As the government tightened the leash on information about of the president, Lissu, his main challenger in the 2020 election was unrelenting on social media. In a flurry of tweets, he noted, “It’s a telling indictment, not just of our so-called press, but of the Magufuli dictatorship that the biggest news story of all time, the disappearance and rumoured demise of the president, is a top story in Kenya and worldwide but in Tanzania it’s as if nothing has happened!

His line of criticism is echoed by Onyango-Obbo, who tweeted, “Tanzania’s VP Samia Suluhu Hassan says country is safe, calls for prayers. Adds that ‘It’s quite normal for a person’s body to be indisposed and contract the flue or develop a fever…’ without specifically mentioning missing-in-action President Magufuli.”

Notably, when the VP made the announcement, allegedly immediately after confirmation of the president’s death she seemed to have an idea of the funeral programme. The “details” in her brief statement suggest the president had long been dead.

Media houses in other East African countries kept tabs on the goings-on in Tanzania. However, the local media kept rehashing official statements, with the few journalists who dared challenge the official line being given the short-end of the stick. The Tanzanian public followed rumours about their president in Kenyan media, with local newspapers, radio and television stations keeping clear of the subject most regarded as a no-go zone.

In spite his many positives, Magufuli had succeeded in suppressing media freedom with a number of journalists who dared scratch the surface to expose the rot in his administration punished and media house being shut down for laying bare his government.

This is what happened to three bloggers who went public about the president’s death before the official announcement hours later. They were arrested and detained for “imagining” and “contemplating” the death of the president.

When humanity destroys its forests, it cries about ‘big loss’, then cuts down more