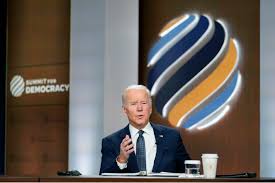 Summit for Democracy: Paradox of US President Biden ‘teaching’ Africa sanctity of the ballot

As the Biden administration prepares for its virtual Summit for Democracy this week, and looks ahead to host the second African Leaders Summit in 2022, one of the fundamental challenges for US policy will be how to advance the agenda of the African people, without contributing to the inertia of its unyielding leaders, many of whom are intent on holding onto power irrespective of popular will and the consequential damages to their nations.

Since the onset of Covid-19, the African continent has witnessed a number of military revolts against civilian leadership including in Guinea, Mali and the Sudan. In addition, it has seen African presidents circumventing constitutional clauses on term limits, and others who have manipulated their electoral processes.

The list of democratic retreats has far surpassed democratic successes.

These authoritarian leaders will not be part of the Summit. But even of those 17 African nations that have made the cut, democracy is more an ambition than a regular state of affairs.

With the benefit of survey data from Afrobarometer, one can see that country-by-country, these power grabs were against the majority will of their populations. Moreover, the data shows that Africans believe that democracy is preferable to all other forms of government, but increasingly, they view elections as failing to hold their leaders accountable.

This year’s Mo Ibrahim Index of African governance also warned that Africa is trending in the wrong direction. For the first time since the index began nearly 15 years ago — and after steady gains — the index reported a decline in the quality of governance.

The index concluded that while undeniable advances in human and economic development have been achieved, they do not offset the deteriorating performances on security, rule of law, democratic participation, human rights, and inclusion.

Africa is set to have the largest population on the planet by 2050, with one in five people around the world being African. Its future — and ours — will in part depend upon whether this demographic pays a dividend, or whether a lack of opportunity will drive more and more young people into despair, contributing to the refugee crisis at Western borders — or worse, to join forces with terrorists and other disrupters of the world order.

The Biden administration has stepped up its engagement with Africa; the announcement of the Africa Leaders’ Summit is just one indication. Other initiatives include the bolstering of Prosper Africa to increase trade and investment flows, supporting vaccine access and vaccine manufacturing on the continent, establishing the Comprehensive Africa Climate Change Initiative, and programs to address the threat of transnational terrorism, particularly across the Sahel and increasingly in the littoral states of West Africa.

And last month, US Secretary of State Antony Blinken took his first mission to the continent since his confirmation to lay out the Biden administration’s Africa policy with stops in Kenya, Nigeria and Senegal.

To African observers, however, Blinken seemed more intent on navigating a politically polite, non-offensive policy pathway, after the ‘shit-hole’ drama of Donald Trump, than seizing the opportunity to project a forward, transformative agenda.

To his credit, Blinken spoke of the retreat of democracy with governments becoming less transparent, ignoring term limits, and closing democratic space. In addition, he chose not to anchor US policy on competing with China, a welcome break from the Trump agenda, and he showed diplomatic humility in recognising that America was not immune to challenges to its own democracy, an allusion to the January 6 events at the US Capitol.

That being said, he didn’t shout out to the African people. He didn’t celebrate the rise of the activist generation, the most important political trend on the continent over the last two decades, and he didn’t say “I hear you” to the youth, women and other change makers who have taken to the streets to challenge entrenched leaders who squander their national resources and corrupt their countries’ politics.

Inauspiciously, Blinken made his speech from Abuja, the capital of Nigeria, where Twitter is banned and where lawmakers are considering a bill to silence the media in advance of a Panel of Inquiry investigation that is expected find the Nigerian military culpable of killing innocent civilians in last year’s #EndSars protests.

Africa’s governing deficit will change when its political outsiders — including the youth and women, those who are energizing entrepreneurship, technological innovation and creative industry — are able to break through the barriers to political entry.

It will improve when democratic institutions stand stronger than ruling elites — and when the popular will is reflected at the polls.

Africans understand that the continent must find a way to bridge to a new generation of leaders. On Dec. 8, one day before the Biden meeting, the Kofi Annan Peace and Security Forum will convene in Accra, Ghana, against the backdrop of the 20th Anniversary of the Protocol on Democracy and Good Governance of the Economic Community of West African States. One of the issues they plan to tackle is outlawing third terms.

The United States should amplify such African efforts to overcome the governance deficit, and to help drive pragmatic solutions to the legacy of authoritarian rule. Initiatives might include:

Inform long-serving African leaders that we are prepared to work with them, but that they must define an exit strategy.

Use our influence to help reduce the gulf between these political insiders and the political outsiders, so not everything ends up in conflict on the streets.

Resource programs to support the youth and women and other novel candidates to bridge the campaign financing gap, with training, with technologies, and with data.

Engage in the electoral process well before voter disenfranchisement begins, including the selection of candidates, the development of elections laws, the make-up of the electoral bodies.

Some may argue that such a bold play would only embolden America’s competitors, most notably China and Russia, as the strings they attach to their support certainly don’t include good governance.

But maybe it’s time for some counter-intuitive thinking in Washington, D.C., and to put all our democratic cards on the table.