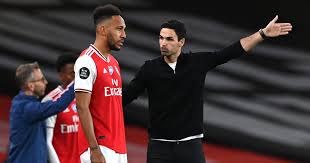 The Athletic claims the striker was given permission to fly abroad for personal reasons but arrived back late and due to Covid-19 protocols, he missed training on Friday and was dropped for the 3-0 victory over the Saints on Saturday.

Aubameyang’s captaincy is hanging by a thread, never mind his future at the Emirates, and the general consensus is that he should be stripped of the armband.

Former Gunners hero Martin Keown said, “The captaincy is in question now. You can’t keep being late or disappearing on trips abroad and not coming back on time, your team needs you and he’s not there when you need him most, So I expect that to change.”

Arteta refused to discuss whether he would demote the forward and look to appoint a new skipper, but it’s a genuine possibility that Arsenal could have a new club captain.

The Spaniard said, “He had a disciplinary breach, that applies to everybody. That’s a non-negotiable and when that happens, he’s out of the team. Whatever happens in the dressing room, I cannot share. I am sorry.

“I’m telling you the reason, I cannot lie, it was that, this is where I stand. From my side, I will never [say what the breach was.]”

There is no standout candidate to take the armband off Aubameyang given the young average age of their squad, but there are three that seem to be ahead of the pack.

According to The Athletic, Aaron Ramsdale, Ben White and Gabriel have all stepped up to become leaders to fill the void left by David Luiz who left the club at the end of last season. The former Chelsea man might have been criticised for how he fared on the pitch, but his leadership off it was invaluable to the young Gunners core.

But Arteta has unearthed Ramsdale, White and Gabriel as his new leaders – making them the three leading picks to replace Aubameyang as skipper. The trio deserve the majority of the credit for dramatically improving Arsenal’s defence this season.

White and Ramsdale only arrived in the summer, but they haven’t taken long to settle at the club. The latter immediately claimed the No.1 spot over Bernd Leno and has not looked back with a string of impressive performances in goal for Arsenal.

It’s claimed his bubbly personality is said to be rubbing off on those around him, but also leads by example on the pitch and fits the description of a club captain.

Arsenal clearly rate White highly after spending £50 million in the summer and he is starting to vindicate that price tag as he forms an impressive partnership with Gabriel at the back. The defensive duo, alongside Ramsdale, are typically the central mouthpieces on and off the pitch.

They are a calming influence on Arteta’s side, organising a backline that has struggled in recent seasons.

The centre-back pairing has also emerged as authoritative figures inside the dressing room throughout the campaign and it would not be a surprise to see Arteta turn to either defender if he takes the captaincy off Aubameyang.

Alexandre Lacazette is also an option for the Spaniard who wore the armband in Aubameyang’s absence against the Saints, but his uncertain future could rule him out. The Frenchman’s contract is up in the summer and he is set to leave as a free agent at the end of the season.