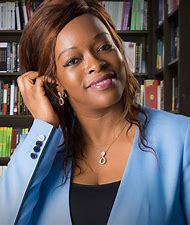 She would have been the first female presidential candidate for a major political party in Benin, where analysts predicted she had the best shot at dethroning the incumbent strongman. But the historic bid of Reckya Madougou, former justice minister in the West African nation, ended abruptly in March when security agents arrested her on charges related to financing terrorism.

A judge on her case fled to France, condemning the charges as “phony,” “tragic” and “entirely politically motivated.”

Early Saturday, a special Beninese court ruled her guilty of plotting to assassinate “several political figures.” Madougou, who has maintained her innocence, was sentenced to 20 years in prison.

“Without witnesses, without documents, without evidence, Madame Reckya Madougou was sentenced to 20 years in prison by three government henchmen,” said one of her attorneys, Antoine Vey, in a statement. “Her crime: Embodying a democratic alternative to the regime… We dreaded it: There is no justice in Benin.”

Vey left the courtroom in protest Friday after less than an hour. The judges, he said, gave him only five minutes to mount a defence. Madougou, 47, has spent the last nine months behind bars in a high-security cell, her legal team said, with “no fresh air, no radio, no phone calls – nothing but rats.”

The case follows a stretch of democratic backsliding across the continent.

Benin’s leader, the 63-year-old cotton magnate Patrice Talon, has a reputation for particularly egregious power consolidation. Talon’s press secretary did not respond to requests for comment.

Since taking office in 2016, Talon’s government has jailed or scared abroad most of his rivals. His former personal lawyer is now in charge of Benin’s constitutional court, and he created a special corruption and terrorism tribunal that has notably targeted political opponents.

“We are witnessing the systematic exclusion of all opposition political forces from the electoral process,” a coalition of human rights groups in the country wrote in a 2021 report.

The first runner-up in the 2016 race, Lionel Zinsou, was banned from campaigning for five years after a judge ruled that he violated campaign laws. The third-place finisher, Sébastien Ajavon, escaped to France after a court sentenced him to 20 years in prison on drug charges. A law professor who challenged Talon in the 2021 election, Joël Aïvo, was sentenced on Monday to 10 years on charges related to money laundering.

All the three men have denied the charges against them. Talon went on to win 86 per cent of the vote in April.

“The arbitrary arrest of opponents has led to the degradation of democracy in Benin,” said Oumar Ndongo, academic director of the African Centre for Strategic Intelligence in Dakar, Senegal.

Madougou, the leader of Benin’s largest opposition party, stands accused of wiring thousands of dollars to a military officer for the purpose of killing unnamed authorities.

“Compatriots who were preparing to commit crimes have designated Reckya Madougou as their sponsor,” Alain Orounla, a spokesman for the Benin government, told reporters after her arrest.

Her lawyer said she sent money to fund campaigning.

“There was no justice,” Essowe Batamoussi, the judge who fled Benin in April and has applied for asylum in France, said in an interview. “We received an empty file and a threat: If we did not put her in jail, we were in danger.” The court declined to comment.

Talon pressured the judicial system to knock out threats to his rule, Batamoussi said. He sent The Washington Post a list of 43 people – activists, academics, aspiring politicians – who have all been jailed during Talon’s tenure.

“I couldn’t take it anymore,” the judge said. “We were supposed to be independent, but the opposite was true. The president did not tolerate serious candidates, and Reckya was one of them.”

In 2004, Madougou founded and became the face of a civil society campaign – “Don’t touch my constitution” – that rallied against leaders seeking to extend their reign under the guise of constitutional reform. The movement spread across West Africa, making her a political star.

“She had a huge chance of becoming the first female president of Benin,” said Toba Tanama, former head of communications for the Togolese president. “She had the biggest opposition behind her. Her fame. Her experience. Her values.”

Since her arrest in March, her mother, Therese, has visited the prison three times each week, dropping off meals of grilled fish and rice. The women are not allowed to speak.

“I just deposit the food, and I go,” she said on a recent Zoom call. “When I get back into the car, I cry and cry.”

The hardest part, she said, is keeping Madougou’s 8-year-old daughter and 13-year-old son from their mother.

“I told them that Mom is away, Mom is having meetings,” she said. “Then finally, I took them to the prison. The little one saw her mom. She wanted to throw herself into her arms. The guards refused to let them touch.”

Analysis: UN mission’s drawdown in Congo should be alive to security and civilian protection concerns